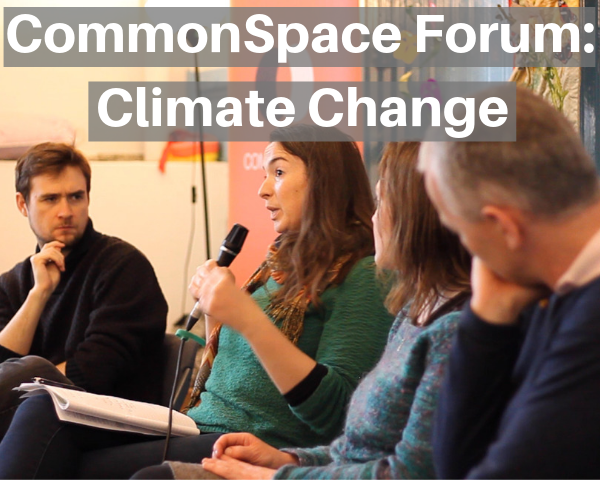 COMMONSPACE’s May Forum tackled climate change and how we can convert words into actions, with immediate effect.

In recent weeks, we have seen the Scottish Government back the Green New Deal, commit to cutting greenhouse emissions to net zero by 2045 and declare a climate emergency. But will these promises be backed up by a solid and credible action plan? How do we ensure it’s not empty rhetoric? There is no time to delay.

– Iain Black, a professor in Marketing at the University of Stirling. Iain is the author of a recent report to the Scottish Government examining the evidence underpinning its climate change engagement strategy. This work builds on 15 years spent studying the sustainable consumption gap – the difference between what people say they will do to live in a more sustainable way and what they actually do. Understanding the barriers that cause this gap, and more importantly how to overcome them, will be essential in ensuring Scotland’s policy makers respond approproately to the First Ministers declaration of a climate emergency.

– Dr Anna Fisk, an activist with Extinction Rebellion Scotland, a non-violent direct-action movement formed to take urgent action in the face of climate emergency and ecological catastrophe, as part of the global justice movement. XR Scotland demands: that the Scottish Government tell the truth about the climate and wider ecological emergency, enact legally binding policy measures to reduce carbon emissions to net zero by 2025, and the creation of a Scottish Citizens’ Climate Assembly to oversee the changes. Since November 2018 XR Scotland has campaigned for these measures through civil disobedience such as a symbolic citizens’ assembly held in the Debating Chamber of the Scottish Parliament (January 2019), swarming major roads and walking blue paint footprints in Glasgow (March 2019), and blocking Edinburgh’s North Bridge for five hours, resulting in 29 arrests (April 2019) as part of the worldwide International Rebellion.

– Caroline Rance, Friends of the Earth Scotland’s climate campaigner. Her work is currently focused on Scotland’s new Climate Change Bill – to make sure the new law delivers our fair share of global action to tackle the climate crisis. This ranges from policy work and meeting with government and MSPs, to organising campaign actions and supporting activists and local campaigners. FoES is calling for a just transition to a 100% renewable, fossil fuel free Scotland.