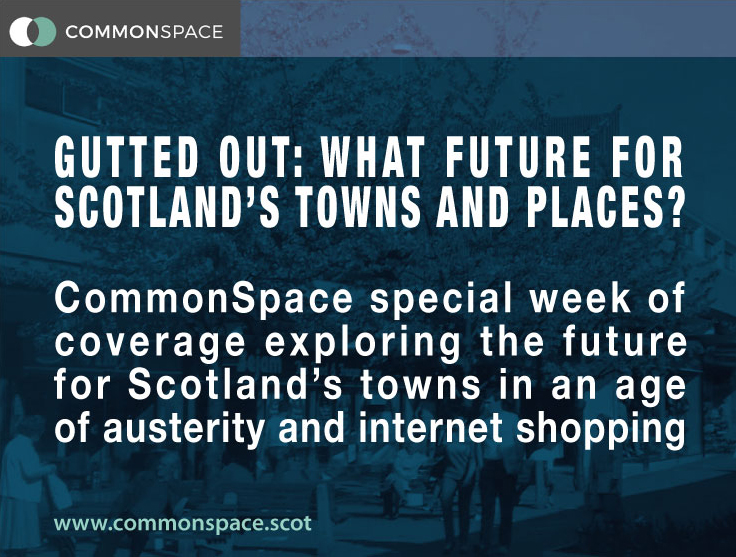 THANKS to the many people who emailed into CommonSpace as part of our special week of coverage on Scotland’s towns & places. We are extending the week until Tuesday 5 March because we have had so much interest in contributions and ideas that we haven’t been able to fit them all in this week.

As well as our trips to Dumfries, Motherwell and Ayr (which we’ll publish on Monday), we’ve had contributions from Phil Prentice of Scotland’s Towns Partnership, Jean Paterson from Paisley, Graham Lebeter who is working with the University of Edinburgh, Craig Dalzell from Common Weal, Rachel Goldie from the Kinworks team, and BREAD, arts laboratory in Ayr. At the start of next week we intend to cover a piece on Hamilton and receive a piece from the STUC.

Finally, we post below the shorter letters we have received from CommonSpace readers from different parts of the country.

I live in Moray, where the council is having to make significant cuts to local services and this is impacting on the high street in local towns and facilities that may be available for tourists.

As the economy of our area relies on tourism, the closure of libraries, public toilets, raising of business rates, introducing car park charges and the increase of business rates for charity shops so they are closing too. We do not have cashpoints in all towns and not everyone accepts cards.

While we may be a coastal area, it is important that seasonal businesses and facilities are maintained.

There is not enough education about community based businesses like social enterprise, co-operatives, grants for set up or support for people who want to do this.

Rural Scotland is just as important to the economy as urban.

Perth and Kinross Council have done quite a good job in road improvements throughout the district, but to my mind have not paid any attention to the town centre with the exception of their vanity project, the proposed museum in Perth City Hall.

The centre of Perth is experiencing a slow decline in the number of shop closures with very few new start ups. The council even go to the length of, as one paper put it “virtually running out of the town,” as the recently closed Sun Parlour shows, not to mention Ann Summers.

Simply because they did not approve of the window dressing, and with the inevitable loss of jobs. True, Perth is not as bad off as other towns but as a council it needs to shake up its ideas before the centre is only betting shops and charity shops.

My home town is Penicuik.

Last year we almost reached 100 per cent occupancy of retail units; the last few months have been devastating however.

The two biggest shops in the precinct B and M and Factory Shop have closed, also others.

The one shining light is The Storehouse. In the last week following a long funding campaign the community finally own the building previously rented from Scotmid.

An organic fresh food and veg shop has been functioning in the front of the very big building for over a year.

I have a vested interest in the demise of Ayr town in particular.  I currently reside in Western Australia but I grew up in Ayr, visit regularly and it is my intention to return there to live in the near future.  As someone who can view Ayr with eyes from afar I have, perhaps,  been able to witness changes differently.

The biggest loss to the town was the removal of the fishing fleet in the early ‘90s. The movement of the cattle market also left it’s stamp on Ayr. Given that Ayr is a market town, I have never understood why there is no actual market in Ayr. This could go a great way in improving the town and in making use of an almost derelict High Street.   Other towns and cities have managed revivals by embracing arts, crafts and adapting to a cafe culture.  Those that have vibrant markets are also very successful but it needs to be done well and not in a tacky way; a market place that also has room for music and beer and has access to decent public conveniences would be a good start. There have been recent, one-off, Christmas markets that have been very successful and enjoyed.

Given that Ayr is a world renowned town; thanks to Robert Burns, and has historical connections to Robert the Bruce, William Wallace and Oliver Cromwell, plus has the added advantage of being situated between two famous rivers, it is incredibly sad and disgraceful that it has been largely ignored and mismanaged. Ayr ought to be a cultural hub and it’s well seen that it needs money put into it in the right direction. Ensuring that historical buildings are preserved and that anything new being built is in keeping with the town is also imperative.

I was delighted  to see your campaign on town centres. I think Jean Paterson is absolutely spot-on. I’m coming at it from a slightly different angle in that I have a huge concern that we’re losing our farmland to housing at an alarming rate. Scotland only has 8 per cent of arable land, 20 per cent suitable for mixed farming and if we’re serious about improving food security, producing local etc etc, we need to start protecting it.

As a side issue, farmland sold for housing pushes up the price of surrounding land massively making it impossible for folk who want to get into farming to secure land. And much land is “banked” and neglected in the hope of getting planning permission for houses.

The Scottish Government seems sadly reluctant to take on the housing developers.

So, the idea of focussing development of housing into towns, using existing buildings and brownfield sites seems absolutely spot on to me.

I put a post on Facebook about this and a friend suggested that eco friendly/zero carbon houses were the thing – although I’m pretty sure none of the major housebuilders do this. Another friend pointed out that the greenest house was the one that was already there and that folk should be encouraged to extend/upgrade – she also pointed out that if you extend/ pgrade, you can’t claim back VAT but you can on a new build, which seems daft.

I’ve seen figures about how many houses are needed – the reason for this is given as smaller households. If that’s the case why are builders building four and five bedroom houses with gardens? Looking round, most folk can’t/don’t care for their garden. Maybe a different type of housing with communal green spaces/allotments for those that want them would be a better plan.