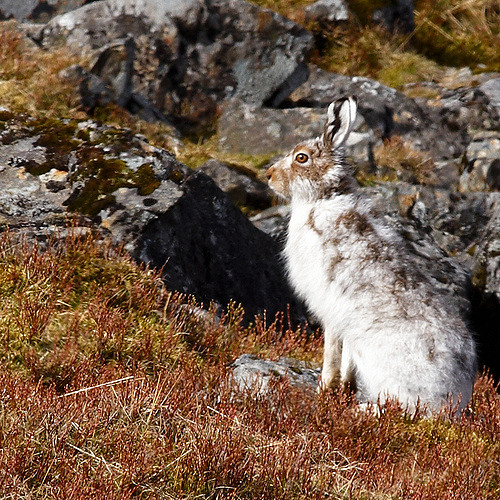 MOUNTAIN HARES IN SCOTLAND potentially face local extinctions due to culls, a coalition of 10 environmental and wildlife organisations has warned the Scottish Government.

The coalition – which includes RSPB Scotland, the Scottish Wildlife Trust, the Scottish Raptor Study Group, the Badenoch and Strathspey Conservation Group, the Cairngorms Campaign, the National Trust for Scotland, the Royal Zoological Society of Scotland, the Mammal Society and the John Muir Trust and Mountaineering Scotland – have called for a temporary ban on all mountain hare culling on grouse moors until measures to ensure sustainability have been put into effect.

The culling of Scottish wildlife hares is currently subject to a period of voluntary restraint. However, in 2014, the same coalition of environmentalists and wildlife groups warned that this practice was unlikely to protect Scottish mountain hares from wide-scale culls on grouse moors such as Cairngorms National Park.

The coalition have also pointed out that the Scottish Government has a duty to maintain mountain hare populations, and that in light of reports of culls throughout Scotland, and that in some areas, mountain hares may face population declines and potentially local extinctions.

“This could mean that the Scottish Government may be in breach of its legally binding international obligations.” Duncan Orr-Edwing, RSPB Scotland

Speaking on behalf of RSPB Scotland, Duncan Orr-Ewing said: “The Scottish Government needs to do more to safeguard these iconic species of our upland areas. In 2014 we had serious concerns that the notion of voluntary restraint would be ignored by many in the grouse shooting industry and, with the evidence of culls continuing on many moors over the last three years, it seems that these fears have been well founded.

“The start of the mountain hare season has already begun meaning hare populations will continue to be put at risk by unregulated culls that we believe, are resulting in localised disappearance of hare populations.

“We still do not know what impact these large-scale culls are having on mountain hares’ wider conservation status and this could mean that the Scottish Government may be in breach of its legally binding international obligations for this species.”

“Culling of mountain hares on intensive grouse moors across Scotland is damaging populations of this species beyond recovery.” Green MSP Alison Johnstone

Scottish Green MSP Alison Johnstone reacted to these warnings: “The mountain hare is a true icon of our upland areas and an important part of our natural heritage.

“The unnecessary and unregulated culling of mountain hares on intensive grouse moors across Scotland is damaging populations of this species beyond recovery.”

“If this points to continuing high levels of culling of hares that could cause significant population declines, locally or nationally, the Scottish Government will consider bringing forward further measures to protect them.

“We are also establishing an independent group to examine how we can ensure grouse moor management practices are sustainable and compliant with the law. We would expect mountain hare management to be part of the group’s work.”