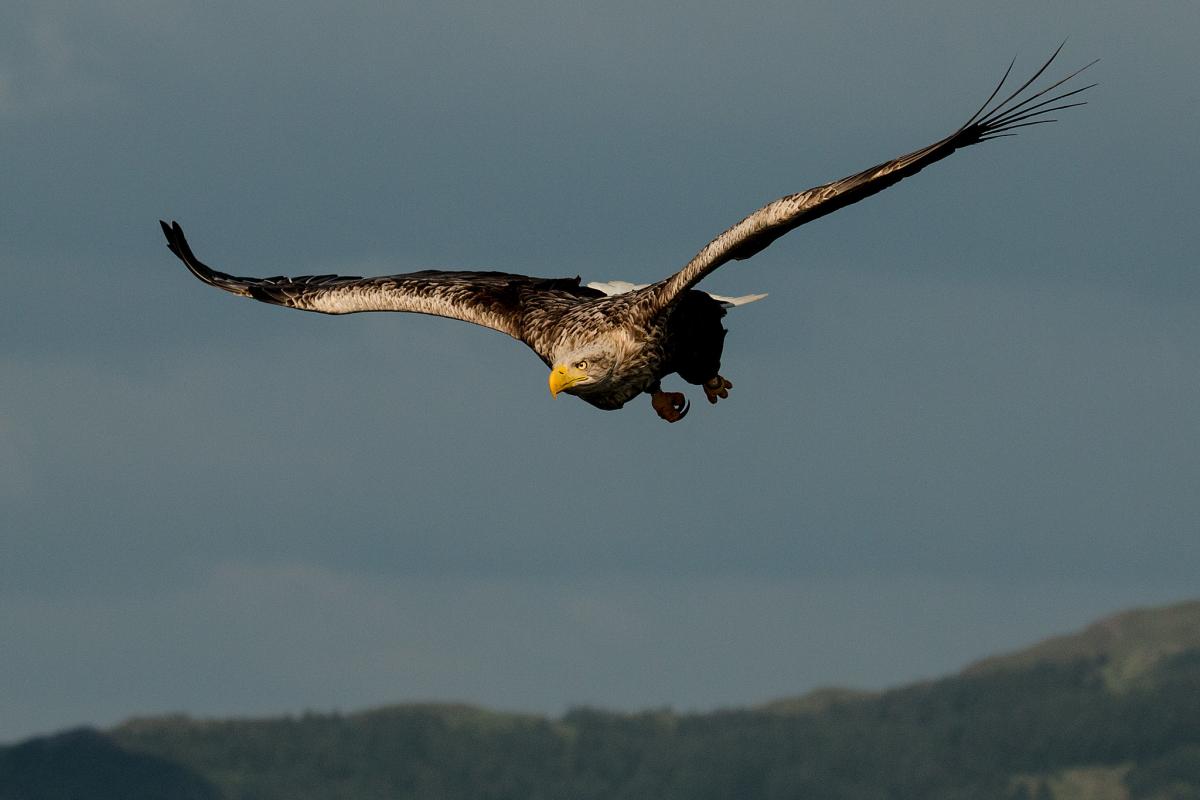 Illegal raptor persecution has intensified calls for grouse moor regulation, but a key report on the issue remains unpublished after months of delays

THE DISAPPEARANCE of two satellite-tagged eagles under “highly suspicious circumstances” on the same day has led to fresh calls for action to tackle raptor persecution from the Royal Society for the Protection of Birds (RSPB) Scotland.

Transmissions from the tags of the two white-tailed eagles ceased on 22 July, with their last recorded locations being over grouse moors in Inverness-shire and Aberdeenshire respectively.

Both of these birds were from the first generation of chicks from breeding pairs in the tiny white-tailed eagle population in east Scotland. Illegal persecution had led to white-tailed eagles becoming extinct in Scotland in 1918, but a reintroduction project led run by RSPB Scotland, the Forestry Commission Scotland and Scottish Natural Heritage between 2007 and 2012 saw them returned to the eastern part of the country.

The Inverness-shire managed moorland in the northern Monadliaths where one of the eagles disappeared is, according to RSPB Scotland, an area with a history of bird of prey persecution, including several suspicious disappearances of tagged golden eagles in recent years, as well as numerous incidents of shooting, poisoning and the illegal trapping of eagles, red kites and hen harriers.

In response to the golden eagle disappearances, the Scottish Government commissioned an independent review in 2016 to establish the fate of these satellite-tagged golden eagles. The review’s subsequent report concluded that a third of these birds had most likely been killed illegally.

Commenting on the latest disappearances, RSPB Scotland’s head of investigations Ian Thomson said: “Yet again, rare, protected birds of prey have disappeared in highly suspicious circumstances, with their last known locations on grouse moors. And yet again, we can be almost certain that these birds have been killed, with those responsible destroying all the evidence.

“The disappearance of these two eagles is more than a loss of two birds; it means any future breeding success they might have had, helping to boost the numbers of these rare birds, has also been destroyed. Illegal persecution is seriously undermining the re-establishment of a white-tailed eagle population in this part of Scotland.”

“It’s clear that current legal deterrents aren’t working and is long overdue that the stain of raptor persecution was removed from our nation’s reputation by the introduction of robust regulation.” RSPB head of investigations Ian Thomson

The satellite tags the eagles were fitted with are intended to allow conservationists to monitor such birds as they establish and develop a breeding population following their reintroduction, as well as providing information regarding any threats they may face.

Since the tags are designed to transmit regularly even after a bird has died, the fact the tags ceased transmission in both cases, with no prior indication of technical problems, is being treated as suspicious. With no sign of the birds, the strong possibility exists that they have been illegally killed.

Following the disappearance, the National Wildlife Crime Unit and Police Scotland were immediately notified and have been provided with the tags’ data. However, follow-up investigations by the police, including searches of the birds’ last known locations, have led to no further evidence of what happened to them.

According to Ian Thomson, these latest incidents demonstrate the need to re-examine existing legal deterrents against raptor persecution in Scotland.

Thomson said: “In 1999, Donald Dewar, Scotland’s first First Minister, described raptor persecution as a ‘national disgrace’, but twenty years on, it continues unabated. It’s clear that current legal deterrents aren’t working and is long overdue that the stain of raptor persecution was removed from our nation’s reputation by the introduction of robust regulation of a driven grouse shooting industry that is blighting our country’s incredible wildlife and contributing to its biodiversity crisis.”

In August, RSPB Scotland’s Birdcrime 2018 report found that twice as many birds of prey were illegally killed in Scotland in 2018 as in the previous year, with 12 confirmed incidents recorded. However, this official toll did not include cases like that of the two white-tailed eagles, where birds disappear under suspicious circumstances.

Last year, following the death of a hen harrier in an illegally set trap and the disappearance of two golden eagles on a shooting estate in Perthshire, the Scottish Government described the continued targeting of birds of prey as “an extremely serious issue” and said that the government “strongly condemn all those involved in it”.

Raptor persecution has intensified demands from conservationists and campaign groups including RSPB Scotland and the Revive Coalition for the Scottish Government to regulate the country’s grouse moors. Options for reform are currently being considered by the Grouse Moor Management Group, which was established in 2017 and was due to publish its report, the ‘Werritty Review’, in Spring this year. In the 2019-20 Programme for Government, the Scottish Government committed to responding to the report when it is published.

However, numerous delays have seen the review’s publication delayed several times, with a Scottish Government spokesperson telling the campaign group Raptor Persecution Scotland in July that the report “was due in the next few weeks”. More recently, environment minister Roseanna Cunningham wrote to SNP MSP Jamie Hepburn on 9 October, telling him that the Scottish Government now expects the Werritty Report “to be submitted within the next couple of weeks”.

Cunningham continued: “It is right and sensible that [the] Scottish Government should wait for that report and consider it carefully, along with all other evidence, before we announce any further action.”

RSPB Scotland has urged anyone with information about either of the missing eagles or any other wildlife crime to contact Police Scotland on 101 or call the RSPB’s raptor crime hotline on 0300 999 0101.