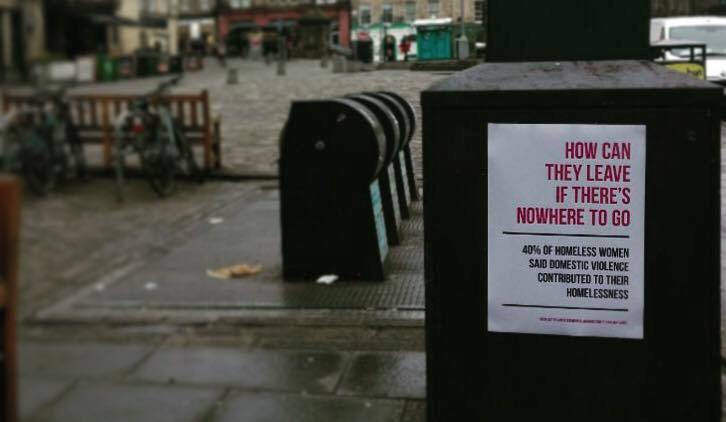 Domestic Abuse Bill a “dangerous distraction” from the threat to support services, Sisters Uncut has said

SISTERS UNCUT EDINBURGH, a campaign group which forms part of a UK-wide movement against cuts to domestic abuse services, has said the Scottish Government should do much more to protect vital support services, and that the focus on criminal justice has sidelined this issue.

The campaigners have said that the political conversation on domestic abuse has put the focus firmly on the criminal justice system through the Domestic Abuse Bill, which the group describes as a “dangerous distraction” from cuts which are leaving too many survivors unsupported.

The Domestic Abuse Bill was passed unanimously in the Scottish Parliament in February 2018, creating a specific criminal offence of domestic abuse, which includes psychological abuse and has been widely celebrated by the gender based violence sector and women’s organisations.

Sisters Uncut Edinburgh has launched a poster campaign in Edinburgh, placing several hundred posters across the city to highlight what it describes as the “funding crisis” facing domestic abuse services, and the impacts of austerity on survivors.

The posters include the messages: “Fund specialist domestic violence services. Annual cuts to Scottish refuges have increased from 14 per cent to 41 per cent in six years”, “How can they leave if there’s nowhere to go? 40 per cent of homeless women said domestic violence contributed to their homelessness“, and “Give power back to survivors. A domestic violence incidence is reported every nine minutes in Scotland.” 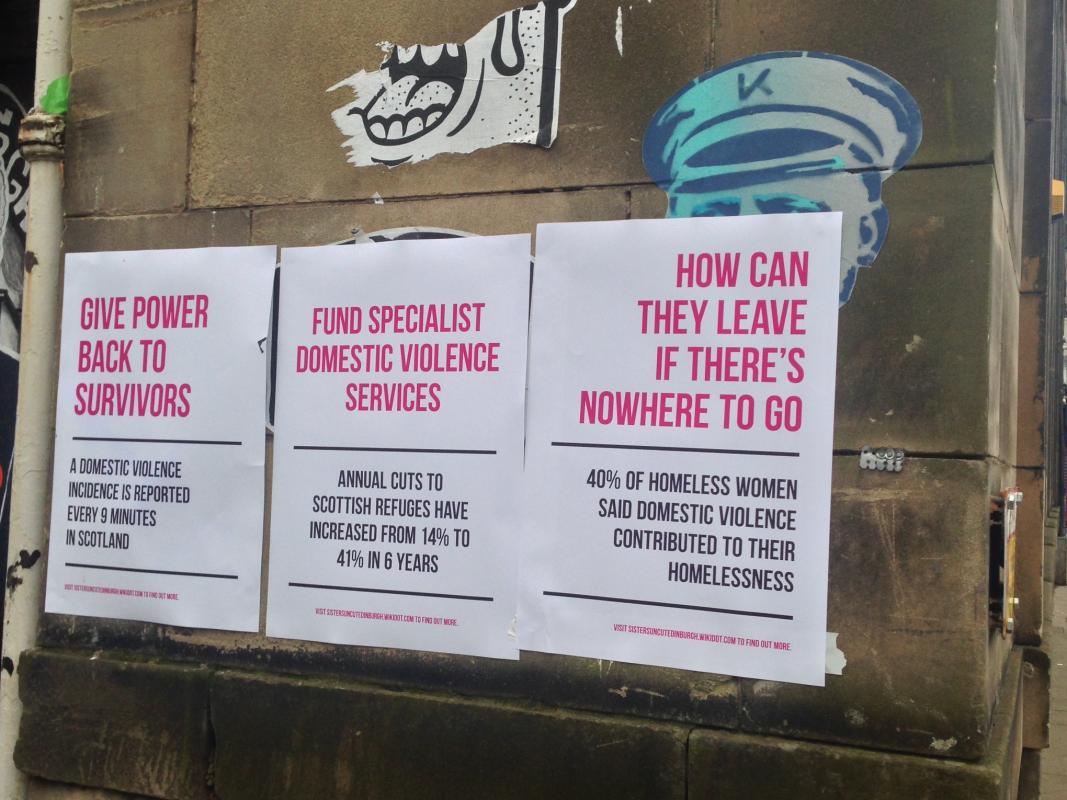 Speaking to CommonSpace, a spokesperson for Sisters Uncut Edinburgh explained: “The aim of the poster campaign is to bring the focus of the conversation about domestic violence in Scotland back to the funding crisis of domestic violence services.

“The focus of debate around domestic abuse in Scotland has focused on the Domestic Abuse Bill and the criminal justice system for some time now, which we feel has sidelined the debate about the enduring funding crisis of domestic abuse services.”

The spokesperson said that “the funding crisis is extremely serious” and was “making it increasingly difficult for survivors to leave dangerous abusive relationships and heal from their trauma”.

While the campaigners said that the Scottish Government had “gone some way towards mitigating the impact of austerity” implemented by the UK Government, they argued, “they could be doing much more”.

The spokesperson added: “The Scottish Government has long had the power to raise income taxes and could have used this to raise funds for welfare services. They have also presided over the introduction of competitive tendering for public services by local councils and this is known to have had a disastrous impact on funding for domestic violence services.”

Sisters Uncut Edinburgh argues that while new powers over refuge provision are being given to the Scottish Parliament, as of 2020, and plans are being made across the UK to move away from the model of funding refuges through housing benefit, this merely amounts to “re-shuffling funding whilst ignoring the devastating impact the cuts have already had on the sector”.

“We think it is absolutely crucial to also recognise firstly that not all survivors have access to the criminal justice system.” Sisters Uncut Edinburgh

Asked specifically whether they felt that the Domestic Abuse Bill could have positive impacts for survivors, the spokesperson said: “We recognise that the bill has the potential to raise public awareness of how emotional abuse and coercive control are key elements of domestic abuse. We also recognise that many survivors have welcomed the bill.

“However, we think it is absolutely crucial to also recognise firstly that not all survivors have access to the criminal justice system, for example because of insecure immigration status they are unable to access legal aid (no recourse to public funds).

“Secondly, we also know that many survivors are being criminalised in the process of reporting incidents of domestic abuse. Recent research suggests that similar measures introduced in the US have led to more survivors ending up in prison. Recent research by the Prison Reform Trust also found that survivors repeatedly reported being arrested by the police despite their partner being the primary aggressor.”

As a result of this complicated relationship between survivors and the criminal justice system, one member of the group involved in the poster campaign said: “We shouldn’t be giving the police more power, we should begiving power back to survivors by funding specialist domestic abuse services.”

Speaking to CommonSpace, CEO of Scottish Women’s Aid Marsha Scott said that while the organisation welcomed Sisters Uncut’s awareness-raising around the matter of funding cuts, some of their information and analysis was inaccurate.

“Calling the Domestic Abuse Bill a ‘dangerous distraction’ is a flagrant dismissal of the work of survivors and those of us in the women’s sector.” Marsha Scott, Scottish Women’s Aid

In particular, Scott took issue with the representation of the Domestic Abuse Bill. She said: “I would contest that the bill is irrelevant or unimportant, or a cover-up for cuts.

“Calling it a ‘dangerous distraction’ is a flagrant dismissal of the work that survivors and those of us in the women’s sector have done for years to get laws passed to better protect survivors of domestic abuse.”

She also explained that while figures used by Sisters Uncut came from Scottish Women’s Aid surveys, some of the data had been misinterpreted. She said: “For example, no group got a 41 per cent cut – it was 41 per cent of the groups which had cuts, and that’s not been made very clear.

“We need to focus both on adequate and appropriate refuge and finding ways, as with the new law on domestic abuse, to keep women and children safe in their own homes.”

Scott noted that Women’s Aid organisations in Scotland are serving more women than ever before, albeit with less money, and said that while this situation was “not sustainable”, it was unfair to represent domestic abuse services as “crumbling”.

“We do a funding survey every year and we have just done one of our local groups and the picture was not great.” Marsha Scott, Scottish Women’s Aid

That being said, Scott said Scottish Women’s Aid was concerned about cuts to services and was working closely with the Scottish Government to develop a new funding model, as well as writing to all local authorities to impress the urgency of protecting domestic abuse services in budget decisions.

In a briefing ahead of the Stage 3 debate on the Domestic Abuse Bill, the organisation wrote that “new legislation cannot and will not improve the lives of those living with domestic abuse if the services that support them gradually disappear as the new law is implemented”.

Scott explained: “We do a funding survey every year and we have just done one of our local groups and the picture was not great. This issue was referred to in our submission to the consultation on the Domestic Abuse Bill and was referenced multiple times by MSPs in the debates as the ‘elephant in the room’.

“I welcome Sisters Uncut’s activism, however, I would invite them to come in and hear from us about funding for domestic abuse services, and the differences between national and local funding.”

Responding to Sisters Uncut Edinburgh’s campaign, a Scottish Government spokesman told CommonSpace: “Scottish Government funding for violence against women and girls has been maintained at its historically high level of £11.8m for the past several years and has been boosted by an additional £20m between 2015-2018.

“This is despite the continued reduction in Scotland’s discretionary block grant received from the UK Government – which will fall by £2.6bn in real terms between 2010-11 and 2019-20.

“The ground breaking Domestic Abuse (Scotland) Bill has been warmly welcomed by a large range of stakeholders, including Scottish Women’s Aid, the national office for local Women’s Aid groups in Scotland.”