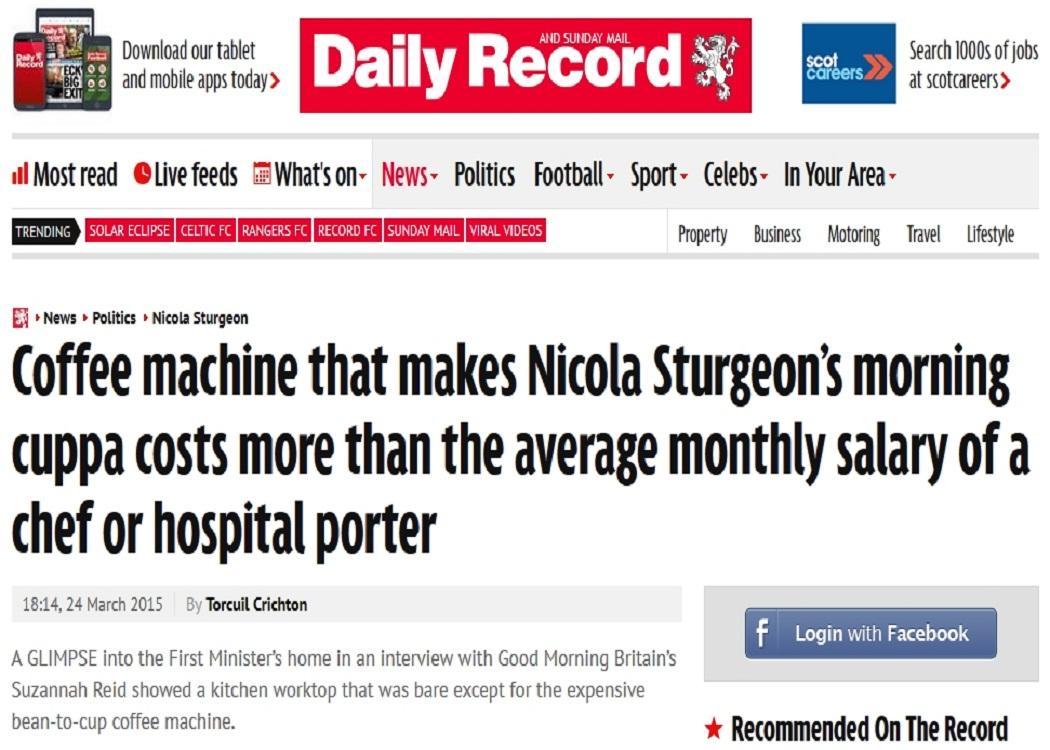 Scottish tabloid The Daily Record has pulled a story about Nicola Sturgeon’s coffee machine from its website after a social media backlash.

On Tuesday, the Daily Record published a story comparing the cost of the first minister’s coffee machine to the wages of a chef or hospital porter.

But after the story, which was written by Daily Record Westminster editor Torcuil Crichton, was mocked on social media it was pulled from the Daily Record’s website.

The original piece claimed that Sturgeon’s coffee machine “costs more than the average monthly salary of a chef or hospital porter”.

It said that an interview with Good Morning Britain’s Suzanna Reid “showed a kitchen worktop that was bare except for the expensive bean-to-cup coffee machine”.

The Record claimed that the De’Longhi Prima Donna Avant machine cost PS1,395. However, it can be found online for almost half that amount.

The paper claimed that the price of the machine “is the monthly take home pay for someone earning PS20,000 a year”.

The story caused a social media storm with many people questioning its relevance.

One Twitter user, Ian Young, said: “I am anti-SNP but imagine actually caring how much Nicola Sturgeon’s coffee machine which she buys out of her salary costs.”

Another Stephen Greenhorn commented: “Thought there was nothing I could care less about than Richard III’s funeral – until the ‘news’ about how Nicola Sturgeon makes her coffee.”

“The truly remarkable thing about Nicola Sturgeon having an expensive coffee machine is that zzzzzzzzzzzzzzzzzzzz….” tweeted ‘Bombskare’, a Scottish ska band.

Sources at the Daily Record confirmed to CommonSpace that it was an editorial decision to retract the story, which had orginally appeared in the Daily Mail.

Picture courtesy of Wings Over Scotland, where you can view a round-up of the best Twitter responses to the story – click here