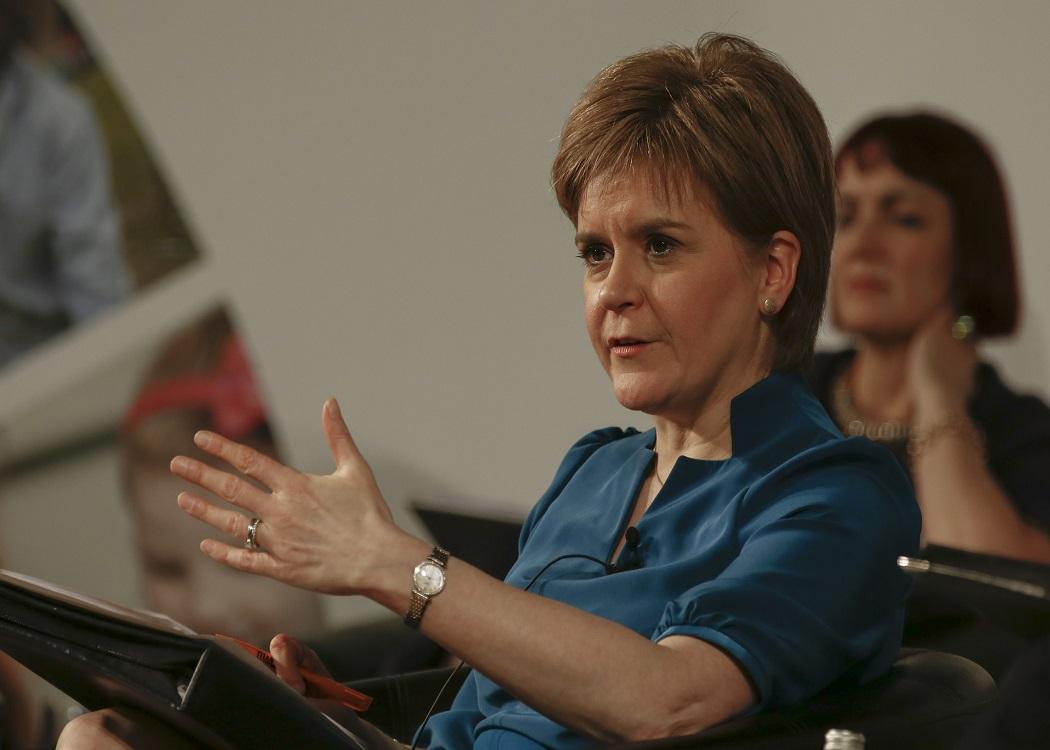 WELL, yesterday’s FMQs was a bit bruising, wasn’t it? I’ve got a shiner this morning just from watching, although that could also have been from the Donald Trump rally I was at last night.

This was mainly down to the delicate matter of the latest GERS figures, which conclusively proved that everything is irredeemably buggered and that anyone who still supports Scottish independence is a sociopathic monster.

Kezia Dugdale was quick to her marks: “Does the first minister seriously still believe that there would be no detriment to Scotland leaving the United Kingdom?”

Back when Labour was last in government, Sturgeon retorted, the UK deficit was over 10 per cent of GDP. The Labour benches howled with opprobrium, as they usually do when the FM brings up anything from longer than six months ago.

“I maybe just missed Kezia Dugdale telling Chancellor Alistair Darling back then that the UK could no longer afford to be an independent country,” said Sturgeon, although to be fair, Darling recently said in a column for the Daily Mail that Britain becoming independent of the EU would “risk our prosperity and safety”, so maybe he’s come around to that view all on his own.

Scotland’s deficit, raged Sturgeon, was accumulated “on Westminster’s watch”. Fair do’s, but it’s worth noting that back in 2013, when the deficit was half what it was and less than two-thirds that of the UK’s, I don’t remember John Swinney saying: “Hurray for Cameron.”

He actually said at the time it bolstered the case for independence. With a hearty chuckle, Dugdale told Sturgeon: “That was about as convincing as Brian Souter’s tax return.” Labour thought it was pretty droll. But Sturgeon was RAGING. I mean, seriously. I even screenshotted it. I’m amazed the ripples of anger rolling off her didn’t crash the BBC live-feed.

The economic case for independence had “been devastated”, said Kezia, with a long mournful sigh, “and is now dead”. She then led a solemn minute’s silence, adding: “I’m so sorry for your loss, Nicola. I was really hoping we could make this whole independence thing work.”

John Mason started weeping up at the back, and Jackie Baillie went over to give him a hug. “There there,” she soothed, “at least we’ve got the fiscal framework.”

OK, most of that was made up.

I’ll teach you a lesson

Dugdale then repeated last week’s acrobatics and sharply switched to education. A bit surprising, given how much of a death-blow for the SNP the new GERS figures are supposed to be, but never mind.

It seems to be a habit she’s picked up from Jeremy Corbyn – why nail your opponent to the wall when you can just prod them with an annoying stick, once?

“There have been huge education and training cuts of 10 per cent!” cried Dugdale. “No there haven’t!” said Sturgeon. “We’ve increased education spending!”

And everything was illuminated.

Sturgeon went on to say that Labour needed to stop carping at the sidelines like some kind of Jeremy, and that she would focus on “building this country up” rather than knocking it.

“I can throw a number at the first minster and she can throw one back,” said Dugdale, at which point I was nearly in tears, crying “LEAVE THE NUMBERS ALONE” as I banged my fists fruitlessly on the desk.

Then Dugdale accused Sturgeon of reading from a “big book of excuses”, which was a horrible thing to say about The Dream Shall Never Die, in my opinion a stellar memoir.

And of course, Sturgeon saved for the end of her exchange with Dugdale a dig at the Jeremy Corbyn for PM event in Edinburgh the previous night, which by all accounts was a barnstorming success, particularly for the SNP and the Green party.

Bookies were flabbergasted when Ruth Davidson immediately started talking about GERS. She went for the jugular, accusing the SNP of trying to “con” people over the revenues of an independent Scotland during the referendum.

“Isn’t it typical?” raged Sturgeon. “Isn’t it typical that we have a Tory government, just like its pals in the Labour party, that constantly want to talk down the prospects of this country?”

The ghost of Better Together had been summoned, which I admit isn’t a very nice way to talk about Blair McDougall. I actually randomly saw him walking up the Royal Mile last week, and he looked alive. Although I didn’t say hi, just in case.

Davidson accused Sturgeon of still being tied to “the Salmond playbook of bluster and baseless assertion”. At this point, I was getting really annoyed. I don’t think Ruth has even read The Dream Shall Never Die. If she had, she’d at least have said something nice about its wry insights and mischievous humour. Although there is a lot of golf in it. Too much, to be honest.

The ghosts of indyref past

Then the mother of all plot-twists: Alex Salmond is in the actual chamber! The ghost of Yes past! John Mason began weeping uncontrollably again, and touched Eck’s face to make sure he was real.

But a referendum nostalgia party wouldn’t be complete without Willie Rennie. You have three guesses as to what his questions revolved around. All I’ll say is it rhymes with ERS.

These were just this year’s GERS figures, said Rennie, adding ominously: “We all know the worst is yet to come.”

Er, point of order: no we don’t. Anyway, moving on.

“Can the first minister look me in the eye,” said Rennie, “and say she really believed what she said then?” To which the obvious response is: “You’re all the way over there.”

Sturgeon didn’t go for this open goal, however, and instead brought up the Tory/Lib-Dem coalition.