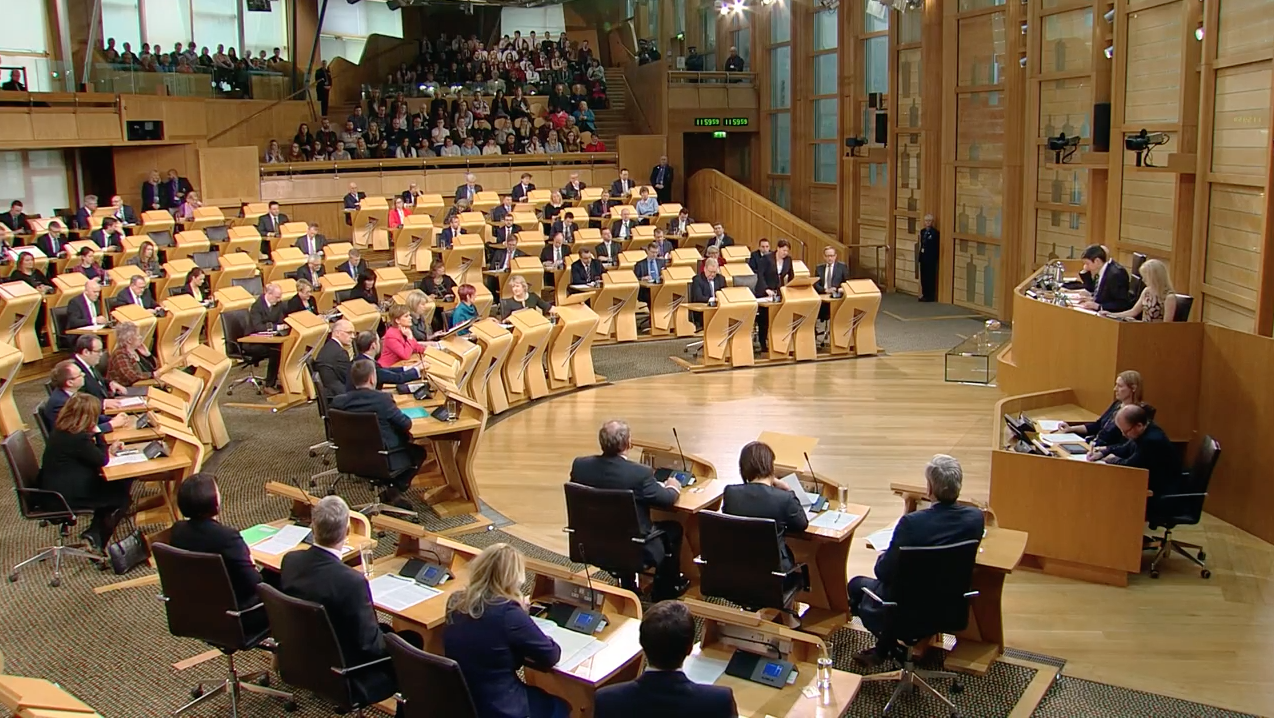 THE last time I did one of these, Labour were still Scotland’s second party, the SNP had a majority and Brexit was just the wet dream of a racist frog.

Back then, the main concerns over Donald Trump were his business connections with Prestwick Airport. Now the question is whether there will be enough planes to get us off this rock when Trump inevitably sends in the US military to take revenge on Patrick Harvie.

These days at Holyrood, Ruth Davidson is leader of the opposition, Kezia Dugdale is carping at the sidelines, FMQs goes on 15 minutes longer and I have got a bit fat.

Ruth Davidson started off with a kind of Corbynesque approach, quoting concerned members of the public, except instead of “Jill from Bradford” it was company directors in the north-east.

Sneaky increases to business rates were “nothing short of daylight robbery”, quoted Davidson, and would see an increase in the bill of small engineering firm Precision Oil Tools, based in Kintore, of 63 per cent.

The first minister insisted that this year is business rates re-evaluation year, which, like the Commonwealth Games, only comes to Scotland once every three decades.

She added that under the new budget, 100,000 small businesses would be taken out of business rates completely.

But the Tory leader was far from satisfied with these answers, and did not think her quoted company director would be particularly pleased either.

She cited another name, Conrad Ritchie, managing director of Score Group (*cough* and Better Together donor *cough*), who feared his company would have to pay £120,000 under the new rates regime and lay off a boat-load of apprentices.

“This government is on the side of business,” Nicola Sturgeon responded, inspiringly.

Ruth still wisnae happy. She said the businesses she’d referred to in her first two questions were hit by the doubling of a business supplement that the Scottish Government “instituted overnight”.

Then she got to the point of it all: economic growth in Scotland, which according to the latest GDP data is only a third of that of the UK’s.

Sturgeon jabbed her finger roughly in the direction of the single market Britain is preparing to leave.

“Whenever she’s under pressure she runs to Brexit,” Ruth Davidson retorted. For me, it’s alcohol.

Health of the nation

Kezia Dugdale got her teeth stuck straight into the NHS. It’s on the verge of a “system breakdown”, she said, not unlike Pep Guardiola’s Google Translate app.

Not her words – that of BMA Scotland chairman Dr. Peter Bennie. He also said he was “fed up” with Scottish Government spin on there being higher doctor numbers than ever – because even while true, there are still not enough.

“We need to move away from the impression that things are OK,” he added in a BBC interview at the weekend. “Because they’re not”.

Part of the Scottish Government’s mantra is to point out – as Nicola Sturgeon did here to Kezia Dugdale – that waiting times have improved from when the SNP took office, and that we have the best-performing A&E departments in the UK.

Although given the situation in English hospitals was described as an actual “humanitarian crisis” by the Red Cross, you’d kind of hope so.

The first minister also noted that her government is investing £500m in the NHS above the rate of inflation – which is more than Labour’s manifesto promised. Personally I think it’s a bit mean to go after a party on a manifesto they had no chance of getting elected into power on, but that’s politics.

Not to be outdone by Davidson, however, Dugdale had her own personal case study – a woman who was told she’d have to wait 12 months for cataract treatment.

Brandishing a letter from the health secretary Shona Robison, she said this lady had been informed that her wait was indeed “unacceptable”, but instead of having her case fast-tracked was recommended a good travel agent. Which is only a slight embellishment on the truth.

Sturgeon responded that she didn’t comment on individual cases, but was probably thinking, “Shona, WTF?”

Now, I know it’s not the done thing to comment on politicians’ appearances, but when did Patrick Harvie get such a rocking beard? His transition to complete and utter hipster is nearly complete. He just needs cowboy boots and a monocle.

Harvie was all over Brexit. “The Scottish Conservatives may now be merrily trotting along behind the Brexit cheerleaders but it seems only 5 minutes ago that they were all for protecting our place in the single market,” he said.

Given that Theresa May’s gonnae take a running shite on all our hopes and dreams (I paraphrase), will there be any delay to indyref2 legislation? he asked. He added that we needed to get off the “Brexit bus”, which is like the Vengabus for farmers.

Sturgeon impressed that the Scottish Government’s Brexit plans, according to senior UK diplomat Lord Kerr, were “impressive, serious and substantive”, and that Theresa May’s Brexit Young Team would be barbarians not to consider them properly.

Finally, there was time for a spot of Murdo-bashing.

Murdo Fraser rose to accuse the Scottish Government of “disgraceful spin” in continuing to insist that austerity actually really happened, citing a Fraser of Allander institute report stating that its budget had gone up in real terms by 0.4 per cent since 2010.

Sturgeon got up with palpable glee, pointing out that the very same report said this 0.4 per cent figure required the inclusion of “money that is not real money that can be spent on goods and services”, by which I’m presuming she meant Monopoly money.

“In terms of discretionary spending and the amount the government has to spend on day-to-day public services such as schools and hospitals, the budget has declined by around 5 per cent in real terms since 2010/11,” she said. “SO THERE.”

And there you have it. I feel I have conveyed this all in quite a boring manner, but to be fair, it was pretty boring. All business, and no silly shenanigans.

I know, I know… that’s how it’s supposed to be. But where’s James Kelly refusing to sit down or Neil Findlay shouting words which rhyme with “Liar” when you need them?