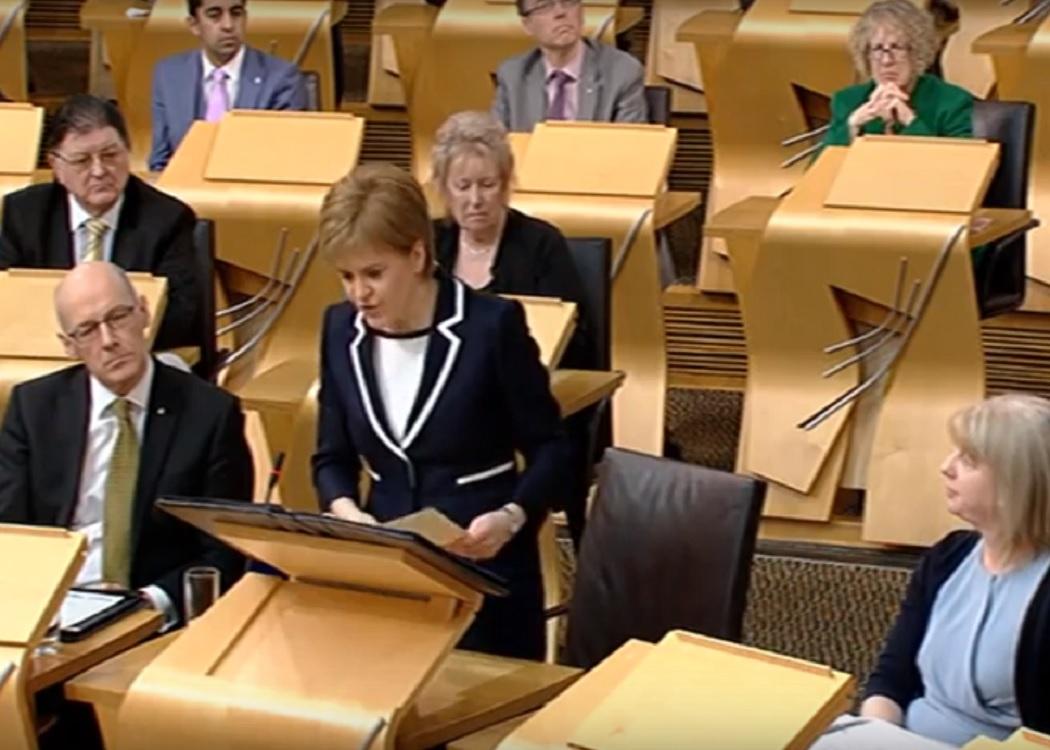 AS the Delfonics asked in track two of their classic 1968 soul album ‘La la means I love you’ – are you gonna break your promise to replace the council tax , baby?

This was Kezia Dugdale’s lament in today’s FMQs, at least for a while. The running theme of her questions – and despite the slightly odd bait-and-switch to fracking halfway through, there was undoubtedly an attempt at a theme – was basically that the SNP are a bunch of pledge-breaking liars who will say anything to win an election.

Of course, she used more diplomatic language than that. Dugdale, after all, is not Neil Findlay. (There’s only one Neil Findlay, Oi Oi Oi).

What I didn’t realise was that there had been a meeting where everyone in Scotland had agreed to prefix any mention of council tax with the word ‘hated’. I never get invited to these meetings. I missed the bedroom tax meeting, the poll tax meeting, and I’ll be sure to miss the meeting on the second baby tax in about 10 years time after climate change, overpopulation and food scarcity really start to kick in.

Sturgeon was in no mood to get called a pledge-breaking liar by the leader of a party who didn’t even have a pledge on local taxation to break.

Perhaps Dugdale sensed the rickety floorboards under her feet on this one, as she seamlessly* moved to questions on fracking.

Labour opposes fracking , said Dugdale, which was news to Richard Simpson, Labour MSP for Mid-Scotland and Fife, who nervously recalled a letter he sent in October 2014 to a concerned constituent in which he said fracking could in fact “both reduce energy prices or mitigate and reduce CO2 emissions”. Whoopsie-doodles.

Sturgeon was at pains to point out, screaming at the top of her lungs: “THERE’S A MORATORIUM ON, DON’T YOU KNOW? MORATORIUM MEANS NO FRACKING. PICK UP A DICTIONARY.”

She didn’t use those exact words, nor did she implore me to pick up a dictionary, but I did it anyway (dictionaries are pocket-sized word-carnivals). Turns out moratorium doesn’t mean no fracking. No sirree. Moratorium means a “temporary prohibition of an activity”. So really, all moratorium means is ‘no fracking yet’.

It did start to make sense, at this point, why Dugdale had used what had seemed to be the ‘Look, A Squirrel’ tactic so memorably condemned by her predecessor’s predecessor. The link between council tax and fracking, it turned out, was that the SNP were a bunch of duplicitous shits.

Although Dugdale didn’t use those exact words, because as you’ll remember from earlier, there’s only one Neil Findlay.

So to Ruth Davidson, who took a different tack this week, having spent the last few weeks on a mission to make farmers like her. Today was all about subs. Not meatball subs. Nuclear subs. Namely, asking if the FM agreed that if the subs at Faslane go, the jobs go.

And she also asked if the FM agreed with Jackie Baillie on anything, which I thought was particularly bold.

Sturgeon maintained that Faslane could be kept on as a conventional naval base and that the dosh spent on Trident would be better spent elsewhere.

Davidson spoke disdainfully of Sturgeon “linking arms” with Jeremy Corbyn at last weekend’s huge anti-Trident rally in London. The FM revealed that Corbyn had in fact refused to arrive at the rally until Sturgeon had left, which surprised me.

For someone without even a proper suit and tie, Corbyn’s a bit of a prima donna, amirite?

There was the expected moment’s silence for the Gregg’s in Loanhead, and a bit of a square-go between the FM and Labour’s Ken Macintosh on apprenticeships – to liberally paraphrase Sturgeon: “Instead of all this whingeing opposition, can’t Labour just start supporting us?”

Things took a slightly odd turn after that, with no less than six consecutive questions relating to neurological services, following a key report by the charity Sue Ryder that said patients needing neurological treatment were being “failed” by authorities.

Undoubtedly a worthy cause, but I did wonder for a moment if it was a co-ordinated cross-party attempt to test the first minister’s own neurological limitations.

Finally, Conservative MSP Liz Smith had a wee chat with the FM about BBC proposals for a dedicated ‘Scottish Six’ news show, seeking assurances that any new programme would be free of government interference.

Sturgeon was quick to pounce: “You mean like how yous do, aw the bloody time?”

She then proceeded to get pretty passionate about how great an idea a Scottish Six was, expounding the virtues of being able to retain more Scottish journalism graduates north of Hadrian’s wall.

As a journalism student myself, who really can’t be arsed moving to London, I’m not embarrassed to admit this was music to my ears.

Although I’m not sure how much all those supporters of hers who spent a day outside Pacific Quay calling for Nick Robinson to resign would agree.

Or Nick Robinson, for that matter.

Speaking of the Scottish Six – you’ve all seen this week’s MoodieVision , right?