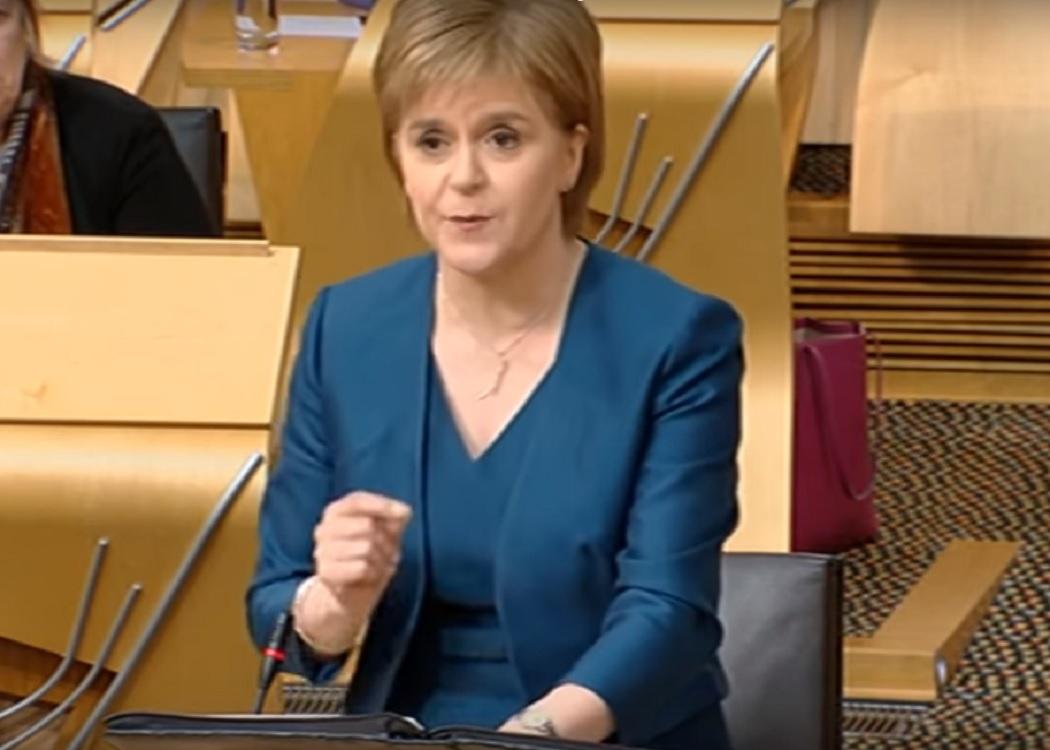 In the first of a new series, CommonSpace columnist Dan Vevers offers his own sardonic take on this week’s First Minister’s Questions

THE Scottish Parliament was on hand once again to prove that it is infinitely more civilised, professional and less fun that its counterpart in London, with nary so much as a whisper made in regards to Patrick Harvie’s lack of tie or John Swinney’s baldy head.

No one even seemed to notice that Kezia Dugdale had got her hair cut (but I did, Kezia, I did), much less demand that she sing ‘Flower of Scotland’ on the spot while doing star jumps.

A relatively spicy beginning eventually crashed into monotony, with a surprise twist ending involving America – in that way, it was not unlike a cheap pub jumbalaya, or the 2001 Planet of the Apes remake.

Though there were less insults and argy-bargy than yesterday’s square-go in the Commons, this is not to say that participants in today’s FMQs were particularly nice to each other.

The first minister was in particularly combative mood, even moving to strike her own deputy first minister for getting his numbers wrong. But her primary attacks were against her main opponents, alternately accusing Kezia Dugdale and Ruth Davidson of being hysterical exaggerators and hypocrites.

Dugdale came armed with quotes from Unite and GMB, calling out the SNP’s “casual disregard” for council cuts, which she claimed would have a “devastating impact”.

Sturgeon responded by quoting a number of Labour-run councils as saying that the cuts would in fact have a minimal impact on jobs and key services, which was a neat way of not putting a number on it.

Dugdale had been “caught red-handed exaggerating” the numbers, said Sturgeon, to which Kezia Dugdale could be seen to this layman lip-reader to mouth the word “wow”, although that could have been related to anything, like a particularly intricate doodle she’d just found in her notes.

The Labour benches looked rather quiet and glum at this point, with Jenny Marra biting her fingernail nervously just behind the leader of the opposition. Dugdale valiantly rallied, pointing out that the 4,000 teachers who had lost their jobs on the SNP’S watch was not something the FM could “re-profile away”, at which point Marra hastily switched to applause.

But Sturgeon wasn’t done with the Labour leader yet, taking a final Salmond-esque swing at the party’s current misfortunes by bringing up Dugdale’s concession speech on the BBC’s Daily Politics show, in which she proudly announced her party would come second in May.

Ruth Davidson was quick to her mark, smirking mischievously as she zinged: “And I think even that may be in doubt.” Next to her, dressed in a fedora, dark shades and a waistcoat, Murdo Fraser was on hand with the snare and splash cymbal.

Davidson proceeded to give the first minister what-for on the “CAP payments clusterf**k” (I paraphrase), all but calling for Rural Secretary Richard Lochhead to resign, although he was a little preoccupied on his iPad watching the tutorial video for his edition of Microsoft Excel 2003.

With the glint in her eye Sturgeon reserves for Tories, she called out the party as having actually argued for the scrapping of direct support for farmers at the most recent CAP negotiations. She then said that the deadline for the new CAP system was not until June 2016, and cited a new hardship scheme for farmers.

By the time the cameras had returned to Davidson, she had cleverly changed costume to a green anorak, tweed flat-cap and a pipe, arguing that the Central Belt was rubbish.

At this point, with the top two opposition leaders done for the day, things fell into a predictable lull. SNP MSPs were on hand to proffer Sturgeon a few softballs, with Linda Fabiani, who had apparently been hanging out with Tim Peake until this morning, innocently enquiring as to the progress of the fiscal framework negotiations.

We went on to learn that Conservative MSP Gavin Brown brings out Sturgeon in “a cold sweat”, which is hardly an unusual affliction, and that Lib Dem MSPs beside Willie Rennie are actually still a thing.

The weightiest question probably came from Dr Richard Simpson of Labour, who argued there were inadequate protocols for immediate assessment units – which are different from A&E departments – with regards to including waiting times in the overall government picture and resulting NHS targets. They’re looking into it, the first minister responded.

How do you solve a problem like Donald Trump?

Finally, Patrick Harvie of the Greens was on hand to produce a worthy climax, calling Donald Trump a “racist bully” and a “dangerous extremist” and asking why Prestwick Airport was reported to have had corporate dealings with him.

Sturgeon wanted to make clear that there was “no contractual relationship” between the two. That was good to know, although given that both Prestwick and the Trump organisation had called their relationship an “official partnership” and “a strategic alliance” back in 2014, it was slightly alarming to learn they’d been doing the whole thing cash-in-hand.

The first minister went on to argue that under EU rules, they couldn’t interfere in Prestwick Airport’s commercial activities. I’ll have to check with CalMac and Scotrail, but I’m sure I’ve heard that one before.

“We just own them, and that’s all, I promise,” Sturgeon concluded.

Now we must all contemplate the possibility that at some point in a future caked in nuclear ash and debris, instead of finding the remains of the Statue of Liberty, intrepid explorers from another world will in fact discover what’s left of the Lincoln Memorial, and will be wondering why on Earth he looks so much like Donald Trump.