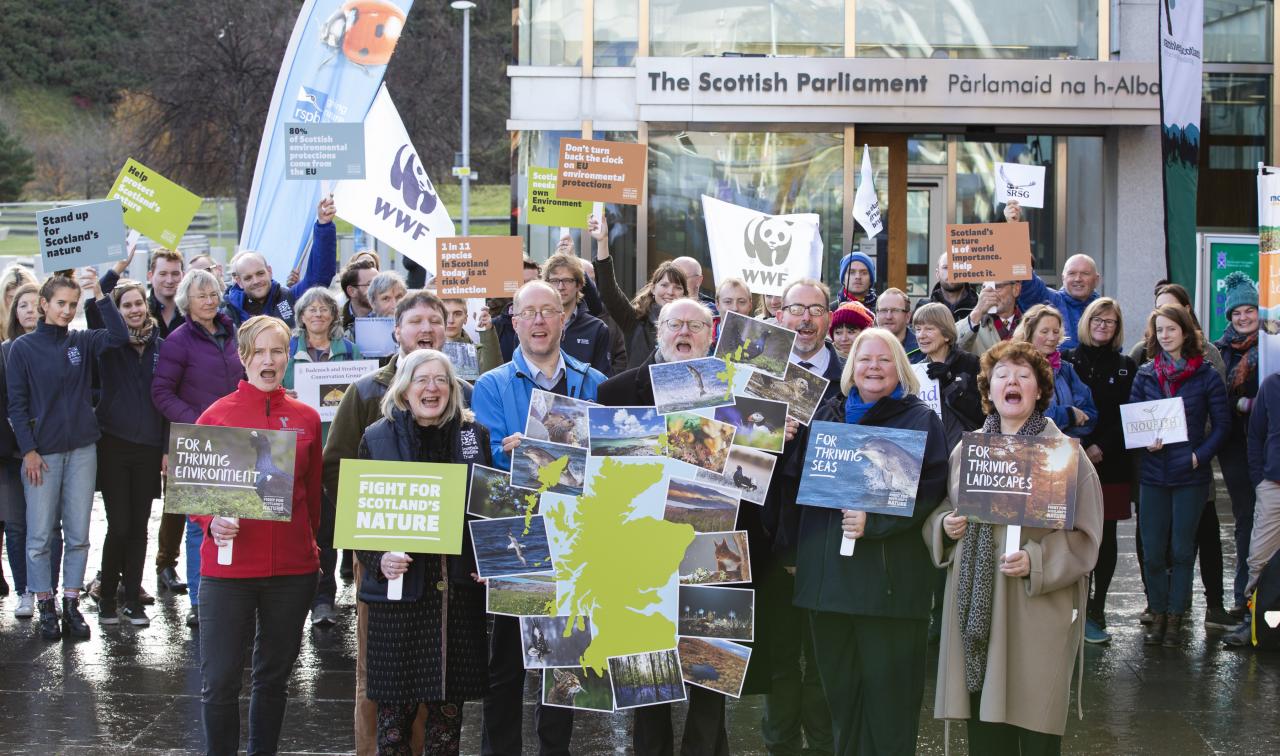 IT MIGHT seem that the imminent threat of a No Deal Brexit, or any kind of Brexit, has been postponed. 31 October feels very far away, and the consequences of leaving the EU might seem far removed from our daily preoccupations.

But we should not be lulled into a false sense of security. Decisions being taken now will define whatever post-Brexit reality we are thrown into. This is certainly the case for the future of environmental protections.

The stakes are very high. So for the first time, 35 environmental charities working in Scotland are campaigning together to Fight for Scotland’s Nature. We’re urging members of the public to support our call for a Scottish Environment Act to retain important EU environmental protections and set our future ambitions for an environmentally sustainable Scotland.

Give the environment a voice

The Scottish Government is consulting until 11 May on the future of ‘Environmental Principles and Governance in Scotland’. This sounds technocratic, but the consultation seeks to find out what people in Scotland think about the kind of environmental protections we should have. Do we want high standards of protection based on internationally recognised principles of environmental law? Do we want to put in place the right mechanisms to make sure our laws are enforced and deliver for our environment? So, the questions the consultation asks are fundamental to the future of our environment in Scotland.

For a country which prides itself on its unique and globally important nature, the answers should be glaringly obvious. Scotland’s waters make up a staggering 13 per cent of all European seas. We are home to one third of all of Europe’s breeding seabirds, and a third of all grey seals in the world live in our waters. Our coral reefs, thought to be around 4,000 years old, support an incredible array of life, including fish, sharks and invertebrates. And on land, red squirrels, capercaillies, pine martens, curlews and so many other species can be found across the country. Loch Ness contains more water than all English and Welsh lakes together. Some of the world’s most precious ecosystems can be found in Scotland, such as machair, where people manage the land in a way that encourages wildlife – so much so that up to 45 plant species may be found in one square metre of machair!

It’s no wonder we take pride in protecting our environment for all that it means to us and our wellbeing.

A perfect storm for environmental protection

But for all its natural beauty, Scotland’s nature is in trouble. Climate change and environmental pressures, from intensive land use to pollution, are taking their toll on plants and animals. Today in Scotland one in 11 species are at risk of extinction. A recent study on the impact of climate change on Scotland’s nature showed that many of our species, including the iconic salmon, are extremely vulnerable.

Scotland is currently failing 13 out of 20 global targets for nature. So, we know we should be doing more to protect our environment.

But Brexit risks throwing a spanner into efforts to safeguard Scotland’s nature. Unless we act quickly, Brexit will lead to a lowering of environmental standards. Even more importantly, we will lose key ways through which we hold governments into account for failing to uphold environmental protections.

Regardless of Scotland’s constitutional future, we cannot afford to unpick existing environmental protections.

We need a Scottish Environment Act

The good news is that the Scottish Government’s ambition is in the right place. The Scottish Government and Environment Secretary Roseanna Cunningham have made it clear that they wish to maintain or enhance environmental standards. But we now need to translate this into action. To do that we need new laws to come into effect.

We need a Scottish Environment Act that:

Environmental charities campaigning to Fight for Scotland’s Nature are asking people in Scotland to support our call for a Scottish Environment Act by signing our petition. Let’s take action before 11 May to make sure our environment doesn’t suffer as a result of Brexit.