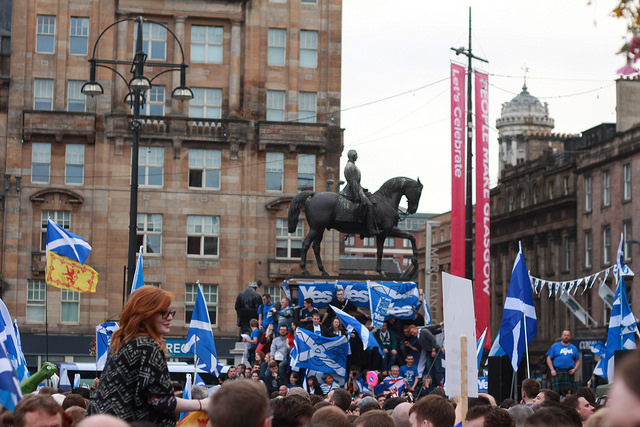 MY entry into the Yes movement was via a Facebook group, billed as a Yes/No debate. I was unimpressed by the quality of arguments: it frequently became shouty and masculine, and opinions which did not fit the Yes line were unwelcome.

We parted company. The issue was whether the UK government would still give the Glasgow shipyards its warship business. People made some quite technical points, based on scraps picked up from the media. I became unpopular when I said "That’s not quite right". When I suggested that it might be important to get the story straight if we are to convince people, I was thrown off the page.

But I had relevant experience, because I worked the very shipyard being discussed. My colleagues’ informed opinions counted and they were telling me why they were unconvinced by the Scottish Government’s assurances. They were not – to use the dismissive stereotypes – victims of Project Fear or uninformed unionist dupes. They put forward some considered and well thought out individual views – on shipbuilding and on independence generally.

During the EU referendum, where I struggled with my vote up until the last minute, I was told I was 'overthinking'. I thought I was just thinking.

I am not nursing a grudge over a trivial Facebook group. My experience was illustrative of a wider tendency to accept favourable arguments uncritically – a form of confirmation bias. The conclusion has been reached. We can stop thinking. So during the EU referendum, where I struggled with my vote up until the last minute, I was told I was 'overthinking'. I thought I was just thinking.

Convincing ourselves is not enough. To make the best possible case for independence we need to share, test and develop our ideas. An important first step is to realise that different ideas are worth listening to. We all have different experiences and perspectives and we don’t all come at things the same way. The second step is to allow for the possibility that we are wrong.

Some ideas, though, are off limits. I have lost count of the number of times I have been told – practically ordered, sometimes angrily – that on no account must I mention the monarchy on the doorstep when it comes to indyref 2.

It’s a bizarre assumption that everyone whose door you chap will be a monarchist. Have you not seen the graffiti in Glasgow? Never assume before you’ve even had the conversation – which might even change peoples’ minds. But no. We can only start discussing after indyref. In the meantime, we have jumped straight to the conclusion of a monarchy – and to other unchallengeable positions decreed to be unthreatening to voters.

I’m not trying to make a case for a Scottish Republic here, I simply think it’s reasonable to discuss whatever we like. But assumptions on what ideas will work with voters  – made on the basis of no actual evidence and before they have even been discussed – close down our options.

Convincing ourselves is not enough. To make the best possible case for independence we need to share, test and develop our ideas. An important first step is to realise that different ideas are worth listening to.

At indyref, Radical Independence Campaign (RIC) activists organised a high street takeover in a leafy Glasgow suburb, but Yes organisers expressed concern that it was inappropriate for the area and re-badged as mainstream Yes. Why? I know there were RIC members in the community. The wild eyed radicals are embedded in suburbia. Surely they’re capable of talking with their neighbours?

But some jump straight to a version of independence we can reach with minimum effort and minimum change, like one big idea will sort everything out. Only think about independence.

It won’t work. Let’s recognise that Scotland faces enormous challenges. Many are the legacy of the union – but some problems are so deep that safe, minimum-change-independence cannot solve them. Yes, we need independence to fix them – and it might make some things a wee bit better – but we also need other ideas.

It would be an extraordinary wasted opportunity not to involve as many voices as possible in discussing how to make Scotland better. What do we want an independent Scotland to look like on day one? There will be differences of opinion – which should be encouraged, not silenced.

This democratic conversation will almost certainly deliver a better Scotland than one in which those who think they know best tell us the conclusion without listening to our other ideas.

We all have different experiences and perspectives and we don’t all come at things the same way. The second step is to allow for the possibility that we are wrong.

And so here we are. We know where we’re headed: an independent Scotland in the EU. It’s a matter of negotiation between politicians and a wee indyref 2. No need to think about it, really. We probably don’t need the vibrant exchange of ideas that we had at indyref. An indy version of 'eat your cereal'?

A recent hobby horse of mine is the warm, uncritical reception given in the press and on social media, from the first minister down, to a statement by Nicholas Macpherson, the former permanent secretary to the Treasury. Brexit gives Scotland "an extraordinary opportunity" to attract skills and investment. Hurrah!

Except that it would be an independent Scotland built around finance and oil. Essentially he means running the Scottish economy in much the same way as the UK has done since the 1970s – with disastrous consequences. Scotland is the only country to discover oil and get poorer? Aye. But think about why and don’t repeat the mistake.

But It’s all decided. Electoral calculation is the thing – call it Tartan Blairism. All I need do is show up, draw a wee cross on a bit of paper and have what I’m given. Wheesht for indy.

I’m unenthusiastic. Another Scotland is possible; one which builds on our best ideas, so let’s discuss them critically. We must embrace the spirit of Margo MacDonald’s "I’m no so much in favour of 'Aye'. I prefer 'Aye, but …'."

We really, really can’t afford to wait until independence. Our one chance to discuss what to do about our future is right now. We must think as if we live in the early days of of a better nation.