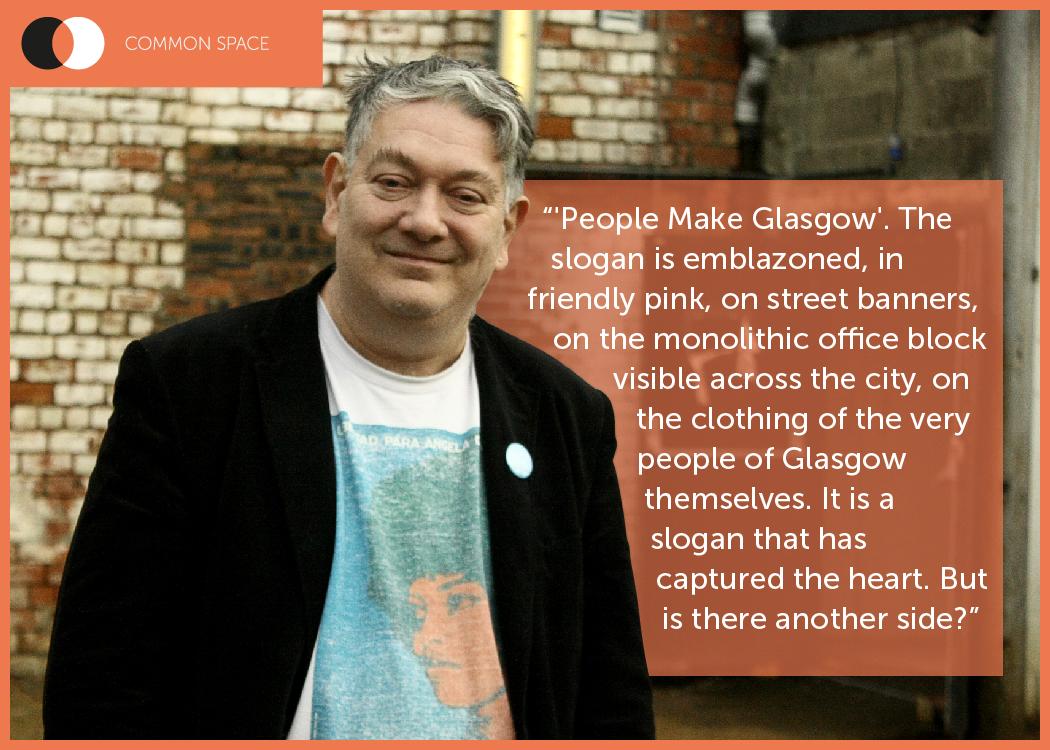 IT’S everywhere. ‘People Make Glasgow’. The slogan is emblazoned, in friendly pink, on street banners, on the monolithic office block visible across the city, on the clothing of the very people of Glasgow themselves. It is a slogan that has captured the heart.

Cities need slogans. They have a dual purpose. Firstly they capture the civic ethos. They express the values that people carry with them. Secondly they project our image to the outside world, advertise us, attract people to Glasgow to share in a part of what we have.

Previous slogans have not quite hit the mark. The official motto ‘Let Glasgow Flourish’ sounds like a cry of desperation when viewed against a backdrop of urban decay. The ‘No Mean City’ epithet speaks of a violent past we would rather forget.

In a literal sense – People Make Glasgow. They build the buildings. They provide the industry and services that makes it all possible. The origin of all wealth is people.

‘Glasgow’s Miles Better’, born out of late 1980s regeneration on the back of the Garden Festival and subsequent Year of Culture asked us to maintain a sunny disposition while maintaining the Thatcherite narrative that the way ahead is to be better than the rest.

But now we have a slogan that puts all of us first.

It is a cliche that Glasgow is known for its friendly people. Blether can be had in bars, at bus stops like in few other places I know. As an incomer, I instantly found Glasgow convivial, engaging. Sometimes to excess.

It’s a good place for mixing. There are bars where the barriers of race, class, sexuality count for nothing. The same is doubtless true of other cities, but we like to think it our signal feature.

And in a literal sense – People Make Glasgow. They build the buildings. They provide the industry and services that makes it all possible. The origin of all wealth is people.

But is there another side?

I don’t wish to decry what is a popular slogan. The very ubiquity of the pink lapel badges – as omnipresent as Marie Curie daffodils – suggests that it genuinely captures how people feel about themselves and their city. But what lies beneath?

We might wonder, for example, about just how inclusive the people and the place truly are given the social apartheid that characterises much of the city.

As we move through the city streets and bars we do not notice who is absent – those on low incomes. Participation in Glasgow’s shopping and drinking cultures is beyond them. They are geographically isolated by poor and expensive public transport. Lack of access to opportunity – to jobs and education – creates a class apart.

In some parts of Glasgow nine out of 10 adults are on benefits. And how can you even get out and about if you’re one of those suffering from our endemic heart disease?

Glasgow was – of course – built by its people. Not just its own people. If we look around at the stunning commercial architecture housing the elegant shops and bars of Merchant City we might pause to ask – where did the money come from? ‘Tobacco Lord’ sounds like a grand term – until we remember that those buildings originated from the height of the slave economy. Who made Glasgow?

Within some of those same buildings, a struggle is underway. Many of the fashionable bars and restaurants where people mix employ their staff on toxic, low-wage, zero hours contracts. As reported on CommonSpace, actions to highlight exploitative work practices are underway. The infrastructure of our city comes at a cost – to the very people who provide it.

We might wonder, for example, about just how inclusive the people and the place truly are given the social apartheid that characterises much of the city.

Here we see what the slogan is really about. The characteristics of Glasgow people are a useful marketing ploy. The Glasgow brand is conveniently echoed in on our clothing. We are – literally – branded and pressed into the service of consumption. The people of Glasgow are for sale to multinationals.

But Buchanan Street is not only given over to multinational retail. It is still a venue for organic activity, whether it be buskers, rickshaws or the Communist Party and Palestinian solidarity stalls which pop up on Saturdays.

And there is always something going on at the Donald Dewar steps, whether a political protest or just folk meeting and loitering. These elements of street life also make Glasgow.

The contribution that these people make to Glasgow is not understood by those who made the slogan. The position of the steps is precarious – Glasgow City Council backed a plan to demolish them in favour of a supermall which only failed when the developers couldn’t finance it.

And don’t try to be a homeless person or a young person with an over-alternative fashion sense anywhere near Royal Exchange Square. Those are thought to interfere with the important restaurant businesses who have purchased pavement licences.

I feel like a curmudgeon for over-analysing a popular slogan. I like the sentiment it embodies. Of course people make Glasgow. They make – everything. Taken at face value, it’s a deeply political statement.

The characteristics of Glasgow people are a useful marketing ploy. We are – literally – branded and pressed into the service of consumption. The people of Glasgow are for sale to multinationals.

But what was the intention of the agency which created it? I somewhat doubt it was meant as socialist agitprop.

It’s on the website. We are invited to participate – to share our views on what makes Glasgow great. But participate in – what?

‘Glasgow City Marketing Bureau works with numerous partners, stakeholders and businesses to position and promote Glasgow across national and international markets as one of Europe’s most vibrant, dynamic and diverse cities.’

A line from The Clash springs to mind: “Turning revolution into money.”