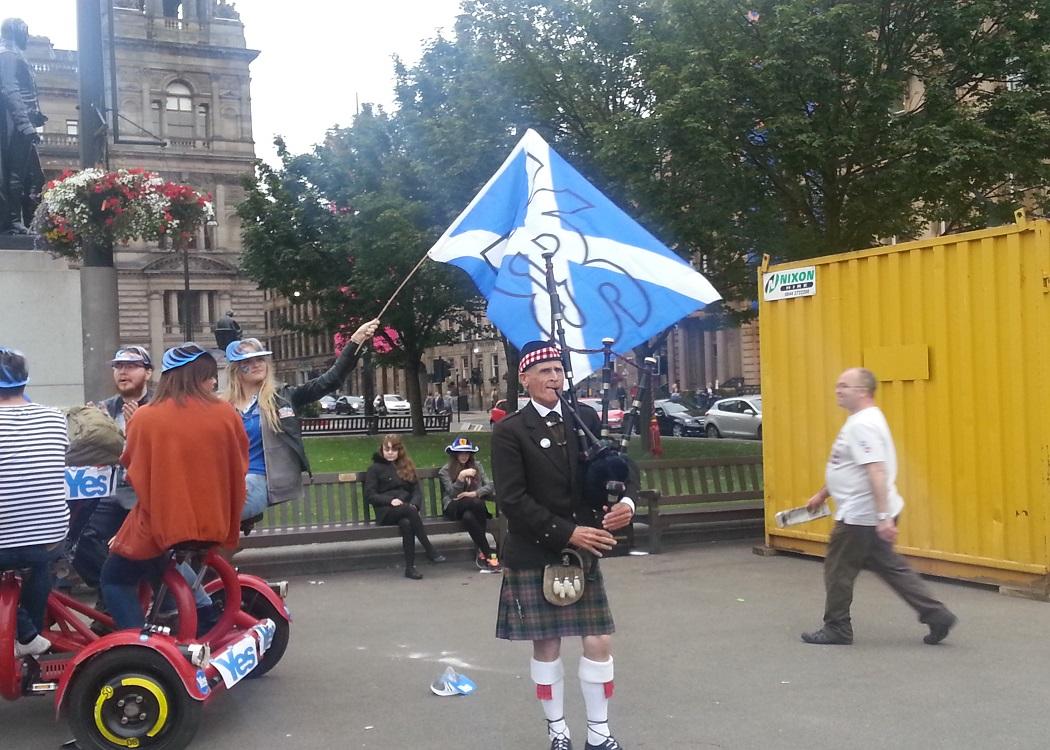 As the one year anniversary of the Scottish independence referendum approaches, CommonSpace columnist David Carr explores the indyref songbook

“THERE was music in the cafes at night and revolution in the air.”

This time last year we all remember as a dream. It was warm. We were making not just history, but a future. And music was an important part of that, music old and new. We were out on the streets, talking – and singing. For Scots can sing. And we did – we sang.

As a non-native Scot, the first Scots music I took to my heart was by East Kilbride’s Jesus and Mary Chain. The done thing back then, on discovering a host did not own a copy of Psychocandy, was to walk out.

Each song is part of a heritage, a tradition that says ‘this is who we are’, from the past, to the present, to the future – gathering more songs as we go.

They are specifically Scottish – what Brian Wilson would sound like if he grew up not in sunny California but permanently dreich Calderwood.

To carbon date me yet more comprehensively, there are many, many other Scottish bands I can add to the list – The Rezillos, The Skids, Aztec Camera, The Associates, Orange Juice and all the Postcard lot.

It was, from my English perspective, intriguingly different – distinctly from Up There. And that was even before – oh, you name your own Scottish bands. We have hundreds.

And then there were The Proclaimers, with their unapologetically Scots accents. Their most popular songs are (I Would Walk) Five Hundred Miles and Letter From America – their heartfelt evocation of Scottish emigration, an instant folk song. But my favourite – which I regard as their most personal and most political – is Throw The R Away.

But it was only when I became a Scot – by marrying an East Kilbride woman who was at school with The Marychain and moving to Glasgow – that I was able to delve into the full range of Scots music in all its traditions.

I did not much know about Scots traditional music at this point. I had bought my future wife a Runrig tape that she’d seen on a date, and she seemed to have a different set of folkie reference points than I did – The Battlefield Band, Bert Jansch, Rab Noakes.

My first real encounter was Aly Bain’s wonderful Transatlantic Sessions where I was struck by an especially poignant version of Both Sides The Tweed with Dick Gaughan and Emmylou Harris.

I bought Gaughan’s excellent Handful Of Earth – still reckoned the all-time greatest Scots traditional Album. I was hooked. I still don’t claim any expertise – I am too much of a musical gadfly for that – but I knew there was something going on.

And each song is part of a heritage, a tradition that says ‘this is who we are’, from the past, to the present, to the future – gathering more songs as we go.

The best new song of indyref was, without a doubt, Stanley Odd’s Son I Voted Yes. I still cannae listen to it without greeting. And that’s all I’ll say.

So we were ready with the songs, when we needed them. For suddenly, singing became political. The songbook was bursting with songs that encouraged, expressed and proclaimed the spirit of independence.

Did the No side have songs? I never heard them. Apart from the obvious ones. But they have – connotations.

Unless you include Bowie. I was and am a huge Bowie fan and I don’t care what anybody says about him. He blundered into a discussion that was not his to have. It was silly – but why would we expect an informed opinion from outside? Crank up Suffragette City and remember what he’s given us.

Of course, they did have Lady Alba’s I’m Voting Naw. You don’t think she was being sarcastic, do you?

Scotland The Brave – that’s for tourists. But we were brave, we were bold, launching ourselves into a new adventure of nationhood.

We famously even have a national songwriter – for Burns works best when sung. A Man’s A Man For A’ That we sing to take us down a peg, its demotic solidarity reminding us that we are all just Scots, on a level, equality our societal value. How’s that for a patriotic song?

We belted out Caledonia, another song of yearning, of the emigrant experience. Could we build a country to draw back the diaspora, our friends, our families to join us, working together as we live in the early days of a better nation?

We sang old songs and new. The best new song of indyref was, without a doubt, Stanley Odd’s Son I Voted Yes. I still cannae listen to it without greeting. And that’s all I’ll say.

And we sang the national anthem. There is dispute over this. Some are under the illusion that, in an independent Scotland we’ll be standing for Flower Of Scotland. No. It’s an OK song – although perhaps harking back too much to old defeats.

I always associate it with football and rugby matches – a minus point to me because I simply take no interest in sport.

A much better alternative is Hamish Henderson’s Come Freedom Come Aa Ye, a song that speaks not to the past but to the future, a future for all. And there’s a lovely, wee, lilt-y bit in the lines like “Will curse ‘Scotlan the Brave’ nae mair, nae mair”.

Yes – I’ll admit – being in rawest Scots it may be a bit tricky at first – but, oh, is it worth the effort. It’s a song we can sing to politicians and to each other – to keep us right. Just call up the words on your phone.

George Square in the days before the 18th was dream-like in its chaotic, unorganised, unmarshalled way, folk playing pipes and guitars and fiddles as they pleased. I will always be glad to have been part of that.

My standout indyref moments were supporting my wife as she helped to run a Women for Independence / Independence for Women pop up stall. They were balmy evenings, full of hope.

We were joined by the future Chris Law MP and his Spirit of Independence fire engine. A band on their way to a gig screeched to a halt and joined us. It was the season when the heather is blooming, so the natural song to sing was The Wild Mountain Thyme. It’s my personal indyref song.

George Square in the days before the 18th was dream-like in its chaotic, unorganised, unmarshalled way, folk playing pipes and guitars and fiddles as they pleased. I will always be glad to have been part of that.

Then out to do our work. Chap the doors. Get out the vote.

And on the 19th – Rule Britannia and The Sash.

I wonder what songs there’ll be at indyref2, because as McFadden and Whitehead sang, There Ain’t No Stopping Us Now.