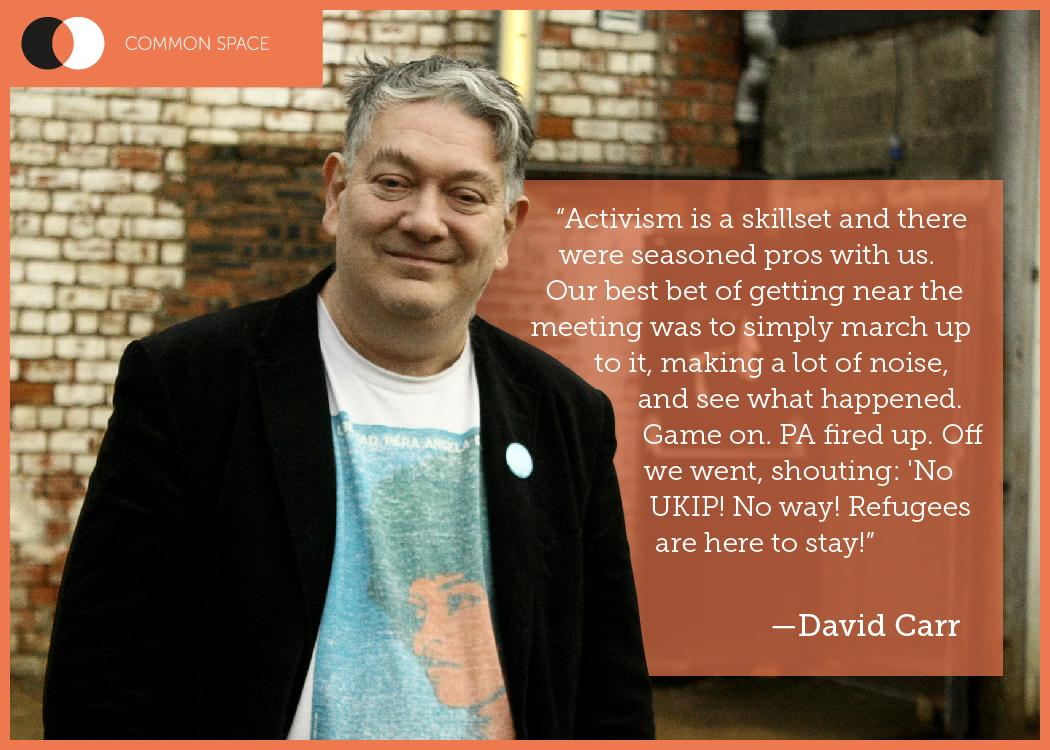 I WAS finishing an after-shopping pint when the post popped up on my Facebook. Demo. Nigel Farage. Glasgow University. So off I went, trailing my messages with me.

On the bus I reviewed my position. This was a bit hardcore, maybe, and what was the demo for? That much was obvious: Ukip is a malign force in British politics which willfully folds animosity towards refugees and immigrants in with its anti-Europe message.

Now the adrenaline kicked in – and not in a good way. I was shaking like a leaf as we entered the lobby next to the meeting hall, where our way was finally barred.

Arriving at the university I met a knot of activists, plotting in a bus shelter. Farage would be speaking to a meeting of the ‘Grassroots Out’ campaign – a coalition of Ukip, Tories and the odd Labour name – including Peter Bone MP, who was speaking at the event – who can apparently stomach the unsavoury company. We watched as the Labour Go battle bus pulled up.

Activism is a skillset and there were seasoned pros with us. Our best bet of getting near the meeting was to simply march up to it, making a lot of noise, and see what happened. Game on. PA fired up. Off we went, shouting.

“No Ukip! No way! Refugees are here to stay!”

Now the adrenaline kicked in – and not in a good way. I was shaking like a leaf as we entered the lobby next to the meeting hall, where our way was finally barred. We kept up the shouting as the police came to move us – backing off when it was pointed out that we were a peaceful protest.

“Say it loud and say it clear – refugees are welcome here!”

The audience were arriving in dribs and drabs – almost outnumbering the press. Grassroots Go, we discovered, have chosen a most unnatural shade of acid green for their merch. The ties are even worse than the hoodies. We kept up the noise, and I started to relax a little.

A couple of ‘Kippers came out and attempted to reason with me. Fair play. First up was an Obadiah Slope of a man in Bullingdon wannabee garb, right down to the waistcoat.

“What’s this demonstration about?” he asked.

“We want you to know that it’s unacceptable to scapegoat refugees who we should be welcoming and caring for. That’s all,” I replied.

“We have nothing against refugees. We favour an Australian-style points system.” He retorted.

“Don’t be ignorant, man. You’re confusing a notoriously failed immigration system with people fleeing war. And do you really want a lecture about how inhumanely Australia treats refugees?” I hit back.

His prognathous pal with the low hairline butted in.

“You’re shitting me? You’ve booked this massive hall for your free speech. Yer man Farage is never off the telly,” I said.

And we shouted some more.

Perhaps shouted slogans are no substitute for reasoned argument. But with the amount of publicity Ukip has been handed, aren’t we beyond that?

“Immigration and inflation are not caused by immigration! Bullshit! Come off it! The enemy is profit!”

Perhaps shouted slogans are no substitute for reasoned argument. But with the amount of publicity Ukip has been handed, aren’t we beyond that? Our aim was to at least let the attendees know that we don’t approve of the company they keep.

As David Coburn MEP opened the meeting, our team inside erupted – and was ejected. Message delivered, we filed out.

One of the team inside, human rights campaigner Pinar Aksu, visibly trembling from her encounter with the heart of darkness, gave her verdict: “They didn’t like refugees in there,” she said. She recounted the snide conversations about stopping “them” from coming here. The abuse and sneers as they were buffaloed out – and the embarrassed laughter from those who could not comprehend why anyone would want to protest.

In the media, Farage said the demo was an attempt by the SNP to close down debate, but protest organiser Joshua Brown said the demonstrators represented a variety of political views, united by a common opposition to racism.

“We’re here from Glasgow Campaign to Welcome Refugees, Stand Up To Racism Scotland, and Rise,” he told the BBC. “Basically, we’re anti-racist campaigners.

I walked down towards the pub with a fellow activist.

As David Coburn MEP opened the meeting, our team inside erupted – and was ejected. Message delivered, we filed out.

Suddenly a gawky youth in one of those vile hoodies spotted us and came flailing across the road, in a state of agitation and wanting to talk. He had all the hallmarks of an Essex lad (by his accent) who’d recently discovered politics and was a bit out of his depth.

“Can you tell me about the protest? Where do you stand on Europe? I’m not Ukip, by the way. I hate Ukip,’ he said.

I replied: “It’s nothing to do with Europe. I was an Out until recently myself. There are valid arguments on both sides – and there are invalid ones. But you should be ashamed of yourself belonging to the same organisation as Farage. Goodnight.”