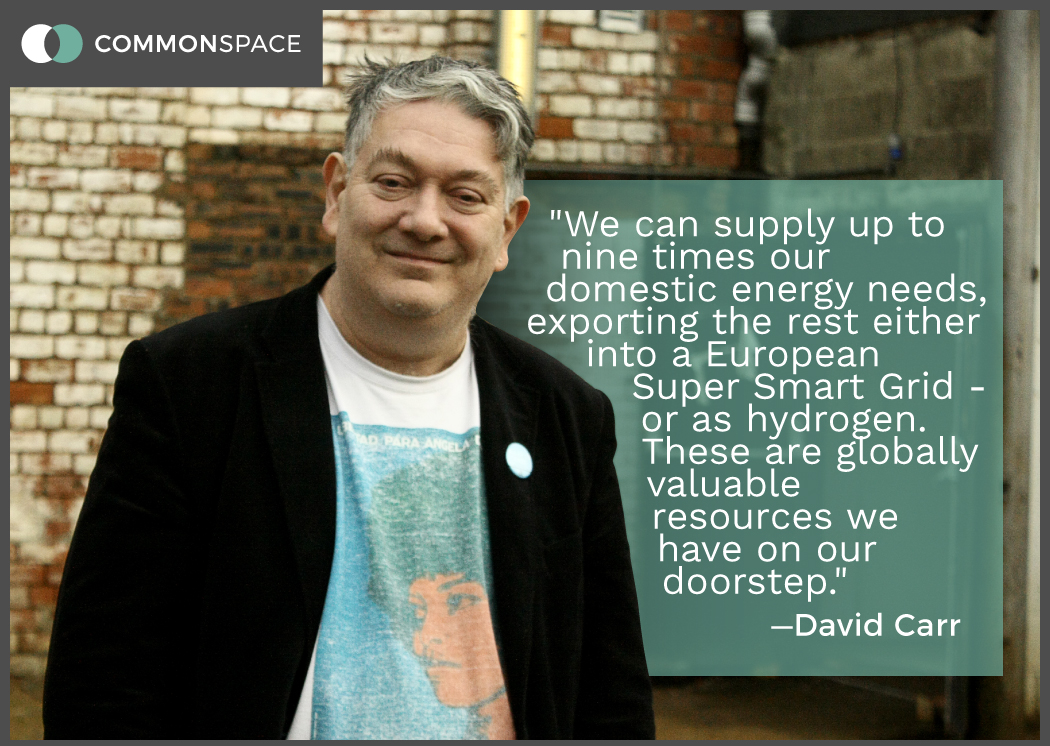 THE UN IPCC report is a shock to the system. Climate change is the urgent priority for this generation. We have only twelve years for global warming to be kept to a maximum of 1.5C or risk drought, floods, extreme heat and poverty for hundreds of millions of people. The immediate implication for Scotland is that we simply cannot burn any more than a twentieth of our remaining oil reserves and remain within climate change targets. In reality we should be turning off oil as soon as possible. This is an economic wake-up call.

Hold on. The good news is coming. One social media comment on my previous CommonSpace piece on a Scottish Oil Fund was that it was very negative. There is little time to build a fund up. Nor is there, sadly, much opportunity to use a fund to transition to renewable energy.  I took that on board. It is perhaps not enough to say what we can’t do without saying what we should do instead.

So here’s the good news. If we choose, an independent Scotland can be in the vanguard of a technological and economic revolution with the potential to avert climate catastrophe. Further, the steps we take to decarbonise can be good for our economy, in terms of size, and the distribution of wealth within it. It would be patronising to preach once more about Scotland’s immense potential in wind, wave and tidal energy. But it’s worth taking a moment to think of just how great Scotland’s potential to export carbon reduction is. We can supply up to nine times our domestic energy needs, exporting the rest either into a European Super Smart Grid or as hydrogen – of which more later. These are globally valuable resources we have on our doorstep.

But we are not there yet. The new infrastructure we need to replace oil-based energy needs to be built, in some cases technologically developed – and it all needs to be paid for.

The initial step, though, would be to turn the oil pumps off.  There is a simple way to do this – taxation. The profit margin per barrel is such that the industry currently requires such things as a low tax regime and subsidies for rig decommissioning.  If tax is increased it simply won’t be worth pumping or exploring.

This has some obvious downsides – but we can own them.

First there is job losses. Approximately 150-220,000 jobs are dependent on the offshore oil & gas industry. We must own them. The Just Transition movement recently met in Edinburgh to develop a draft manifesto for action to deliver a rapid green transition which secures the jobs of workers whose employment is currently tied to fossil fuels. In reality, this part won’t be difficult. Developing and building the new technological infrastructure will require many, high-skilled workers.

Secondly it misses out on £15 billion over six years from a Scottish Oil Fund – revenues that could otherwise be put to good use, including funding the transition. But there are other ways to generate money than burning oil.

One way suggested by Ross Greer MSP is simply to seize profits from the very polluter companies that have done the damage in the first place. This would not be easy and would be resisted by the oil companies. A start might be to revisit corporation tax. Better would be a levy on the companies’ wealth. They have earned good money from oil. Now we need some back.

There are also mechanisms which could provide even more finance. An independent Scotland with its own currency could use Green Quantitative Easing, to create money by directly stimulating the green economy – rather than banks.

A further necessary feature of an independent Scotland, a Central Bank, could be instrumental in quickening the roll out of energy generating infrastructure, It could fund it through Energy Bonds whereby the buyer would be guaranteed a certain amount of future energy output, tradeable on energy markets, in return.

Funding through these methods could be channelled through a Scottish National Investment Bank focused on building up new, green infrastructure and creating jobs in green industries. Any power generation and distribution infrastructure could be retained in public hands – national, municipal, community – funding the common purse and maximising the finance available for feeding back to further fund the roll out.

These measures are all do-able. But as economic approaches they are a far cry from the current, corporatised, oil-centric model envisaged by some for a future independent Scotland. It is simply untrue that we need oil money when we have these alternatives – though we should make no mistake that there are political forces that will resist them.

In terms of technology, there is still much to be done to replace oil. However we are on the very brink of a revolution with many green technologies mature or maturing. As Sheikh Yamami of OPEC said as long ago as 2003: ‘The Stone Age did not end for lack of stones’.

The world is beginning to evolve from the oil age to the hydrogen age. Hydrogen, supported by batteries, will become the primary vector for storing and supplying energy. As we speak, cars, buses and even ships are being run on non-polluting hydrogen fuel cells. Experts say this method of propulsion has greater potential than the now familiar batteries alone. Electric cars – hydrogen and battery – are already increasing in numbers simply due to market forces. They’re getting better than petrol, and their price is coming down. Analysts are already predicting a price crash in oil with the increase in the uptake of electric cars. Subsidies for electric cars would beneficially precipitate this crash.

Of the simple things we can do one of the most significant is to invest in excellent public transport systems. This should include electrification of Scotland’s railways to take advantage of green energy, and use of electric buses. Cars will still exist  – but it’s getting people out of them as much as possible that is the key to a lower carbon footprint.

Technology is not yet wholly mature for heavy plant and large ships which will still need diesel and bunker fuel respectively. Here Scotland is fortunate to have the potential to provide another valuable resource: seaweed – farmed and not dredged from the wild, as was recently banned in Scotland. It is capable of being turned into a range of carbon neutral biofuels and environmentally friendly bioplastics. by fairly simple processes. Investment in seaweed farming and processing seems like a no brainer for Scotland.

The transition to electric/hydrogen will not be a simple matter of changing vehicles. Not least there is the offshore generating capacity and subsea grid connectors to be built – all challenging but basically known technology. In addition there will be supporting infrastructure, particularly ports and harbours for building and servicing. Here Scotland is fortunate in having many potential facilities some of which are currently used by the soon to be redundant oil industry. Investment in these could have spin-off benefits for other maritime activities, from sea transport to tourism to involvement in North Atlantic shipping.

Granted, there is a wealth of work to be done. Coordinating the radical economic measures and technological investment will require a concerted focus. One way of looking at it is as a Green New Deal – an idea that is taking off in both Europe and the United States. Like FDR’s, it would be a social and economic stimulus package, funded by measures such as wealth taxes and ‘Peoples QE’.

The Green New Deal would address social and economic issues as well as climate change. In practical terms it could be used to employ people in small jobs – insulating homes – to large – building generation and distribution infrastructure. And it could be used to invest in university education and research in green technologies. There are clear economic and social spinoffs from all of that.

A Green New Deal could be as far reaching in its effects as FDR’s New Deal was in depression era America. It would  deliver a sound economic footing for Scotland, providing employment, redistributing wealth and addressing some of our social disparities. And all while targeting  the urgent problem of climate catastrophe.

So there’s no need for gloom about oil. We can find solutions to pit against the double blackmail of climate catastrophe and neo-liberal economics. If we carry on burning oil, then yes – we risk severe consequences. But even if we turn down the opportunity of a Scottish Oil Fund we can still more than prosper as a society while mitigating those consequences.

‘We do our part!’ proclaimed FDR’s New Dealers. To tackle climate catastrophe we need a similar evangelical zeal.

Have you heard the good news about Scottish oil? We don’t need it.