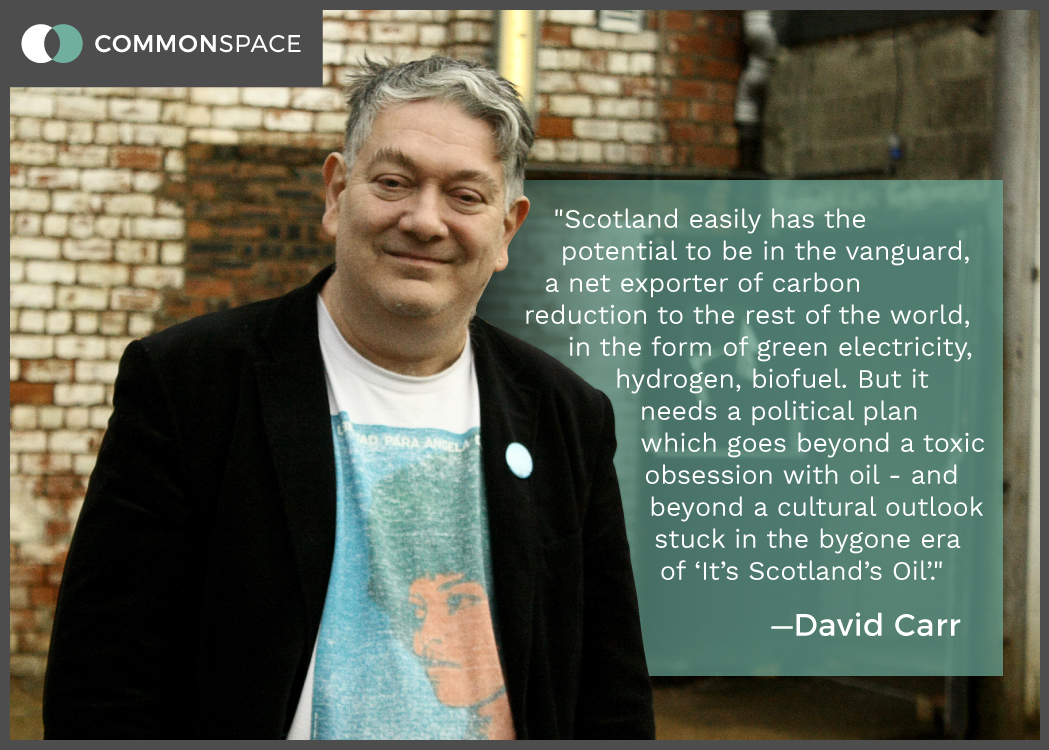 THE UN Intergovernmental Panel on Climate Change’s recent report has focused minds. Or should do. Climate scientists warn that we only have twelve years – twelve – for global warming to be kept to a maximum of 1.5C,  beyond which even half a degree will significantly worsen the risks of drought, floods, extreme heat and poverty for hundreds of millions of people.

This is now our urgent task and shakes to the core any thinking about what Scotland must do with its natural resources. In short, the oil must remain safe beneath the seabed and we must take immediate action to decarbonise our whole way of life.

This is a political problem. The Scottish Government has some good policies around carbon reduction – although the IPCC report highlights the need to do more, faster. But at the same time they are rightly concerned about the approximately 150-220,000 jobs which  are dependent on the offshore oil and gas industry. Plus, naturally, there is an eye to the revenues produced by oil in a independent Scotland.

Let’s leave aside the fact that the money from oil reserves currently goes largely to the oil companies and not to the UK Government – there are no plans to nationalise the Scottish industry – and revenues are currently low due to tax incentives. There is little prospect for building up a Norwegian-style sovereign wealth fund, seen by some as a useful cash cow for independence.

But the black, black oil still dominates the Scottish psyche. This is evidenced by the relentless bigging up of oil in the indy corner of the print media. Every new gas find off Shetland, every new field starting to produce oil is splashed as a feature – ignoring the inconvenient truth: it’s got to stop, right now.

To take a minor example, a recent letter given prominence in Facebook feeds, illustrated by a picture of an oil rig, rehearsed a persistent old canard about the re-drawing of Scottish maritime borders to ‘steal’ 6,000 square miles of territorial waters. It is imperative – it is said – that an independent Scotland take back these oil-rich waters.

READ MORE – Gordon Morgan: Here’s how Scotland can eliminate CO2 emissions by 2045 and help save the world

A little journalistic due diligence suggests that the story is not quite true. Westminster did not have the nefarious foresight to filch oil fields from  a future independent Scotland. But any territorial waters we do have, we want for renewable energy and fisheries. Not for oil.

Yet the pro-oil rhetoric persists. And the memes. The damned memes. I have a new mission in life. Whenever folk start wetting themselves online over how much oil an independent Scotland would have, I post a link to the IPCC report. Twelve years. Twelve.

Which is all well and good. But realistically we are not going to simply turn off the pumps tomorrow. There are the jobs and the (small) revenue to think of – to say nothing of how we’ll replace oil for transport. What we urgently need is a plan for transitioning away from fossil fuels.

The trade union movement has developed the concept of a Just Transition where government invests heavily in the low-emissions sector in a way that provides social protection for workers. If we want governments to take action against climate meltdown, we should at this stage be scrutinising their likely manifesto commitments for evidence of such coherent thinking.

Labour recently launched their Green Transformation, heralded by John McDonnell, and building on the TUC’s analysis of One Million Climate Change Jobs. This sets the benchmark by addressing the urgent problem in a way that gives benefit to society through a programme of job creation, upskilling, national investment bank financing and public ownership.

It is in Scotland where oil is in sharpest focus. The SNP have – understandably – concentrated on mitigating job losses through conventional means (tax breaks, at the expense of revenue) which the oil companies say they need to carry on pumping and exploring for new reserves. They are, of course, limited to the art of the possible given their devolved powers. But their problem is that urgent, comprehensive action is needed and if there is a plan for action in an independent Scotland, it is fair to say they have yet to articulate it.

I am by no means suggesting here who anyone should vote for. As a supporter of Scottish independence I would very much like the SNP (and all parties!) to up the ante on practical policies to make the transition beyond oil. Because this issue really should be dominating our political choices. It cannot be parked until after indy.

What is to be done? This excellent CommonSpace column outlines some of the technical solutions that we could be promoting, in the here and now. Naturally it focuses heavily on renewable energy (for hydrogen production) – which Scotland, independent or no, could supply in abundance – and biofuels, for which seaweed farming is an attractive source. (Seaweed also provides bioplastics as an attractive alternative to oil-based plastics – our number two environmental catastrophe). We have more than enough territorial waters for this.

Scotland easily has the potential to be in the vanguard, a net exporter of carbon reduction to the rest of the world, in the form of green electricity, hydrogen, biofuel. But it needs  a political plan that goes beyond a toxic obsession with oil – and beyond a cultural outlook stuck in the bygone era of ‘It’s Scotland’s Oil.’

What we very much can’t afford to do at this crucial point is to leave it to magical thinking and the markets to deliver solutions. What will continued neo-liberalism mean? More oil. The climate catastrophe is potentially transforming our living environment. We must transform the way we do business. It’s a big task and a daunting one. So what’s our plan?

We have twelve years. Twelve.