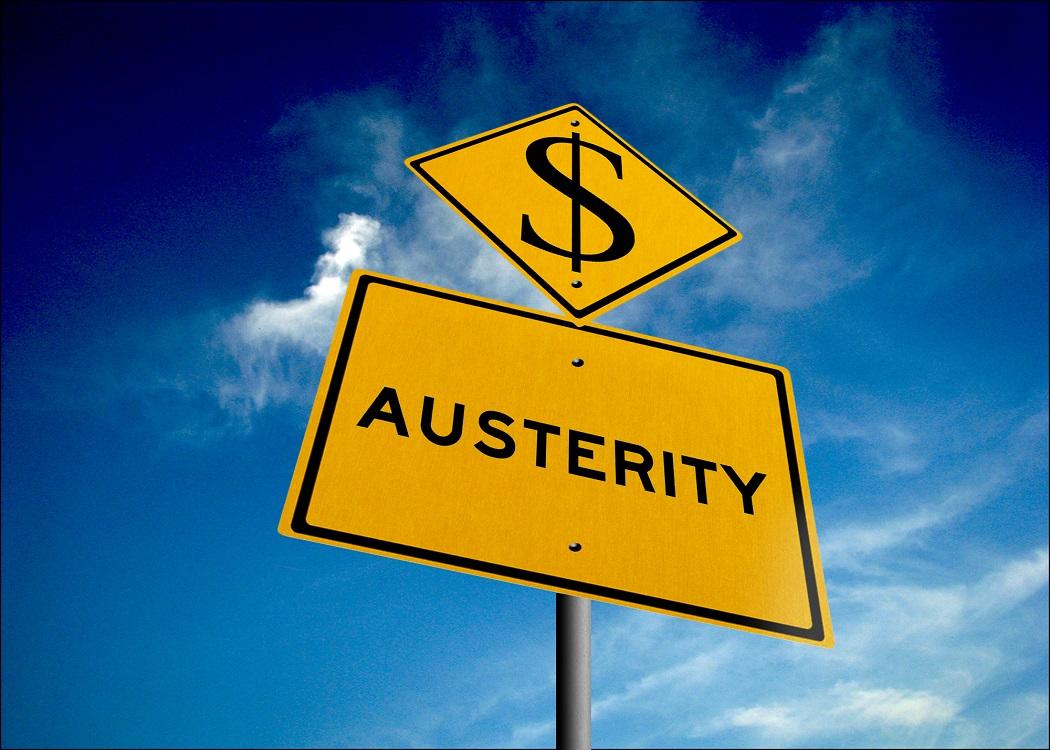 IT’S okay to say you are anti-austerity, but we need comprehensive policy to back this up, and to develop the argument for an alternative. The first challenge is to understand what austerity is.

The way we are sold austerity is that it’s a simple matter of balancing the books. The economy is just like a household budget. Economics from oikonomia (oikonomia), ‘household management’. You can’t spend what you don’t have. That’s not ideology: it’s a basic fact.

It breaks down even at the household level. We buy a Transcard on tick because it will be cheaper in the long run. Plus it lets us go out and earn money. We invest in the capital costs of a new suit to allow us to get a better job. But let’s allow that the money in vs money out equation has validity.

The difficulty comes with competition. We operate a winner-takes-all system. Employers are obliged to keep costs down, keep wages low, outsource overseas.

How do we make money in the wider economy? The origin of wealth is people. We work for employers. They make their legitimate profits. They write off their payroll costs and pay us an amount that allows us to live.

The difficulty comes with competition. We operate a winner-takes-all system. Employers are obliged to keep costs down, keep wages low, outsource overseas. Put workers on contracts such that they are responsible for their survival outwith the hours they work. (Zero-hours contracts: treating humans as just-in-time inventory). And so on.

This is unsustainable in the longer term, and we all – businesses and employees – know it. So we have agreed a social contract to meet employees’ basic needs. This has not been done simply to be kind. Healthy, educated, secure people generate most wealth.

The controversial one is unemployment protection. Should people be paid well if they are not generating wealth?

Well, if people lose their jobs and are panicked through poverty into accepting a job below their skill level, then ‘human capital’ drains away from the economy.

Plus if people are prepared to take a risk and leave a crappy job, employers have to up their game: productivity and innovation improve.

Some nearby industrially successful social democracies understand this well. Not just the usual suspects – Germany, too (although of late, Germany has prevented other nations from competing with the same model).

From the 1970s, the UK economy went through an economic restructuring and moved rapidly away from the social contract. The business model was centred on the London-based finance industry.

We might observe that these underpinnings of wealth – health, education, security – are paid for through personal taxation. Some businesses seem less than keen on contributing – don’t they already pay the wages from which tax is taken?

But in the end – it’s win-win. Ish. The state looks after the people, This provides an infrastructure so that business shareholders can become wealthy. Employees are paid.

From the 1970s, the UK economy went through an economic restructuring and moved rapidly away from the social contract. The business model was centred on the London-based finance industry. The sums were – are – made to work by squandering oil revenue. De-industrialisation was a necessary evil, related to currency price.

The finance-centric model requires a relative handful of people to operate it and its peripheries, reasonably well paid, a few – but by no means all – hugely. They are attended to by long-tail, low-paid service sector, often immigrant labour. All this exists to send wealth first southwards, then upwards.

So inherently, the UK business model has little need for an industrious social democratic infrastructure. And in south-east England, where the canny Tony Blair understood that elections are won and lost, folk don’t vote for one. Why would they?

But there came a problem. US banks sold folk mortgages they couldn’t afford and did some prestidigitation to pretend that nobody owed anyone any actual, real money. This had knock-on effects throughout the financial market.

The way it played out in the UK is that we were in serious danger of losing our AAA credit rating. This would mean that we wouldn’t be able to back up our finance industry.

Bonds investors needed reassurance that we could balance the books. We couldn’t generate more income – how? – from whom? – so the solution was to be seen to squeeze the poor until their pips squeaked. Although for all the impact on the problem, the cuts are penny-ante stuff.

We’re told that books must balance. Our TVs are telling us that people needing help are scum.

Austerity is a bitter, physical battle for those it directly affects. There is also a battle of the mind to be won. We’re told that books must balance. Our TVs are telling us that people needing help are scum.

While resisting this received wisdom we must also re-frame our understanding of how basic economics actually works. The alleged drains on resources that some would have us cut are the very foundation of our prosperity.

To take just one, small example, I urge you to Google ‘The Heckman Equation’. In brute, business terms, pouring money into early years education in deprived areas has a staggering return on investment. It’s Nobel Prize stuff. Literally.

Don’t let the austerity ignorami patronise us with their superior knowledge of economics. They know nothing. Let’s not get economics backwards.