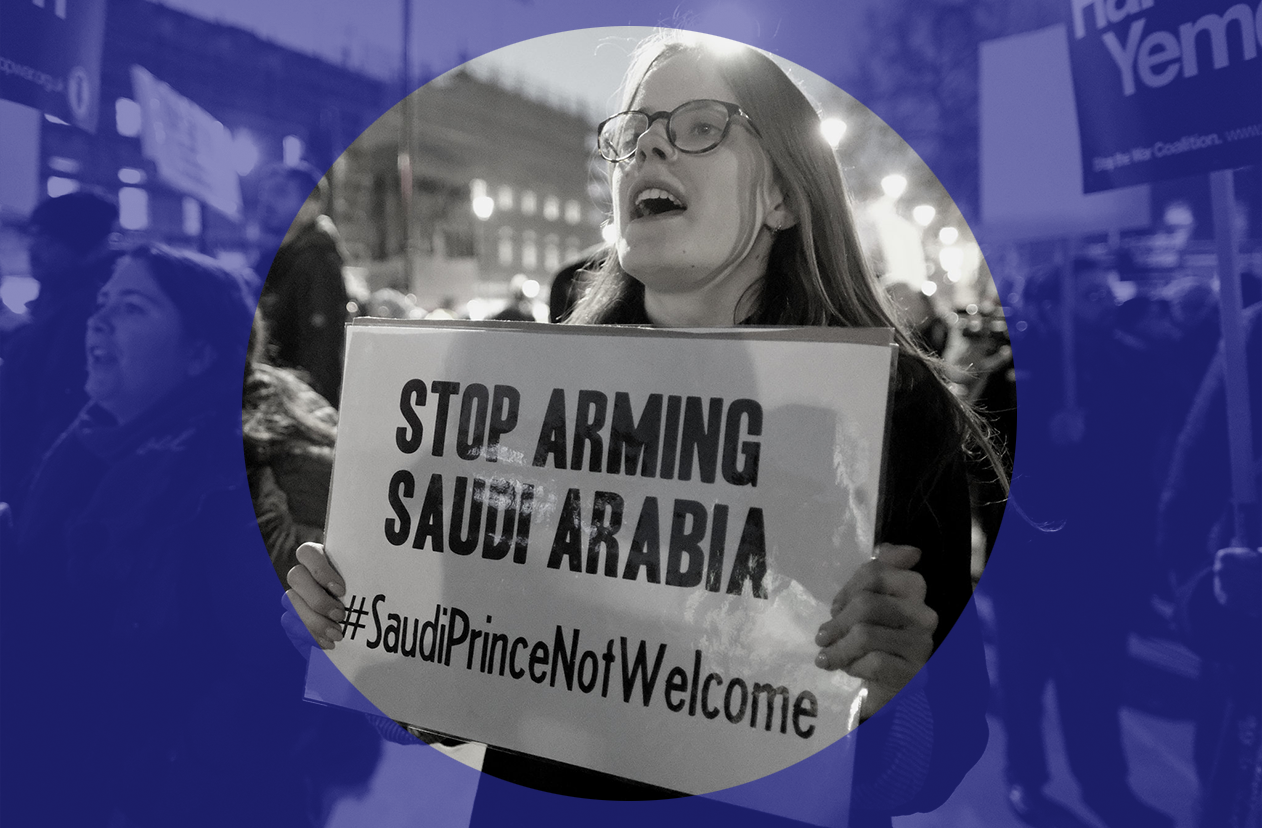 “When you make the gun, put the bullet in the chamber, then point the barrel while another man pulls the trigger, who is responsible for the shooting? By any reasonable definition the UK is at war with the people of Yemen.”

IF THE 19-year war in Afghanistan is the forgotten war, and the implosion of Libya is the marginal war – of interest only to the extent that it informs European debates about refugees – then the war in Yemen is the silent war.

Its origins in an internal conflict in 2014, in the wake of the Arab Spring, was noticed in the West only by regional specialists. The Saudi Arabia-led bombardment of the country from the spring of 2015 onward was scarcely reported by Western media – even when it became clear that the UK and US in particular were elbow deep in the blood which it shed.

Since then, aid agencies have pleaded in vain for world leaders to halt the conflict and supply emergency aid to Yemen’s suffering people. In October 2019 the death toll smashed 100,000, with 20 million Yemenis suffering food insecurity and 10 million experiencing famine conditions.

Infectious diseases have ripped through the country; there were 110,000 reported cases of Cholera between January and April this year, the worst outbreak in modern times. As Covid-19 adds to the country’s woes, medical charities are now warning that potential Cholera victims are avoiding hospitals in fear of infection.

The frantic pleas of the charity sector speak directly to the appalling contradictions at the hear of the world order. So desperate has the situation become in the country, supposedly impartial humanitarian institutions have largely abandoned criticism of the Saudi-led and US and UK-backed attacks on the countries heavily urbanised areas.

On the same day the coalition was condemned for another war crime – the killing of 13 civilians in northern Yemen, including four children – UN secretary-general António Guterres removed it from a blacklist of state and non-state actors, specifically established to shame forces killing children. The widely understood reason? To encourage Saudi Arabia to continue sending aid to the country it is mauling.

As Yemeni anti-war campaigner Jehan Hakim put it: “The same hand we’re asking to feed Yemen is the same hand that is helping bomb them.”

Let’s be clear about the degree of Western complicity; the UK is supplying far more than arms (many from Scottish factories) and diplomatic cover to the Saudi regime. It has sent its own military specialists from the Army and RAF to actually target the air-to-ground bombing attacks.

When you make the gun, put the bullet in the chamber, then point the barrel while another man pulls the trigger, who is responsible for the shooting? By any reasonable definition the UK is at war with the people of Yemen, where the killing is next to indiscriminate.

Writing for the Telegraph in an article that does at least call for an end to the conflict and mention the UK’s role in arming the slaughter, Save the Children chief executive Steven Jenkins said: “The UK already deserves credit for bucking the trend of declining international donations and delivering £160m for the Yemen response. We now need diplomatic heft to persuade Gulf donors and others who have cut humanitarian aid to step up to the plate.”

The thrust of his argument is that the UK state and the Gulf coalition partners should dole out more rice and bandages as they bomb. It is the miserable lot of the NGO to beg the warmongers for the cash to heal a fraction of the wounds they are inflicting.

You can’t be humanitarian without politics

The conflict in Yemen is complex, with deep roots and many factions and dynamics. The UK is far from the only moving part of this drama, and removing its influence alone will not end it. Yet the unwinding of the country represents the collapse the architecture of a region deeply shaped by a hundred years of western involvement.

The West is determined to protect Saudi Arabia as a key ally in a region whose resources and strategic position is only going to become more contested, both by foreign competitors and domestic demands for democracy and justice, in the coming century.

But beyond all the callous strategising is a human catastrophe and a moral collapse that will be remembered, and produce consequences, for generations to come. The UK’s continued involvement is indefensible. The claims to be fighting a just war ring as hollow in Yemen as they do any other recent foreign policy mess; or at least they would if they rang-out in our official political discussion at all.