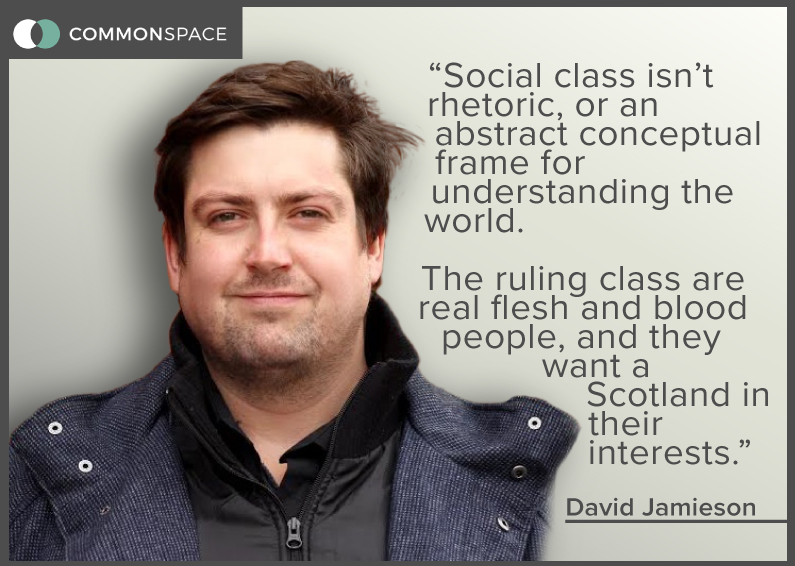 David Jamieson examines the networks of elite power in Scotland and how, principally through Charlotte Street Partners and its founder Andrew Wilson, the Growth Commission is being used to try to tie those interests to independence, something which is likely to be a “doomed project”

I ONCE snuck into a Charlotte Street Partners (CSP) after-party at an SNP conference in Aberdeen.

Motions and debates on the conference floor had been strictly controlled by the Standing Orders and Agenda Committee. Several votes on leftwing policies, advanced by party branches, were taken firmly off the agenda.

Not so at the dingy, secretive swaray. It was a free for all. Oil and gas men scrummed for position with bankers, lobbyists, media personalities and the rest, who swarmed as close to the MPs and MSPs as they could get.

I spoke to two young and rather slick oil men, who were eager to know if I had any influence with figures in the party, and was there anything they could do for me? I was reminded instantly of Tony Soprano: “One thing about us wise guys, the hussle never ends.”

This after all is where real power lies in any modern neoliberal democracy. Not on the floor of conference or even a parliament, but in a dimly lit bar, soaked in free booze.

CSP’s notoriety has steadily grown since it was founded in 2013. The “corporate communications” outfit has become a key instrument in the organisation of the Scottish ruling class, providing it with linkages to government and intellectual life that have weathered Scotland’s tumultuous political situation. A landmark in the groups rise to prominence was a dinner it hosted for 50 of Scotland’s leading firms with Nicola Sturgeon in January 2015, granting extensive access to the First Minister not long after her ascent to poll political position.

For Professor David Miller, a sociologist at the University of Bath, and a leading researcher on the Scottish ruling class, CSP represents part of a process of wedding governance to business interests.

“When the SNP came to power, the lobbyists had no idea what was coming. They didn’t have the intelligence that they pride themselves on.

“Some things have changed since then. Charlotte Street Partners is a good example of that.

“They would exemplify the sort of thing that is meant by a flex network.”

In his research, Miller has drawn on the work of anthropologist Janine Wadel, who examined the activities of so called ‘flex networks’ during the collapse of the USSR and the implementation of oligarchical rule in Russia.

Her definition of these operatives would fit CSP and its co-founder Andrew Wilson to a dot and comma:

“…manoeuvring between government and private roles plus their skill at both relaxing the government’s rules of accountability and businesses’ codes of competition and at conflating state and private interests. The essence of these groups is that the same collection of people interacts in multiple roles, both inside and outside government, and keeps resurfacing in different incarnations and configurations to achieve their goals over time.”

READ MORE: Exclusive: New demographics of independence report identifies most Yes votes to be found among the working class

This was the reason for consternation in some circles when it was announced that Wilson would be heading up a new SNP Sustainable Growth Commission. The fear was that the Scottish ruling class were being given a free reign to establish a manifesto for their own elite interests, and to attach this to the independence issue.

Those fears proved only too founded. When the report was finally launched, it presented a future Scotland as the model neoliberal economy. It’s currency proposals would severely limit an independent Scotland’s economic choices, and bind the new state to the UK’s finance-friendly policy. Deficit reduction and controls on public spending, which have so undermined public services since the financial crisis, would very much remain the order of the day.

The response was indeed the debate Sturgeon called for. But it was a debate that went almost entirely one way. The storm of protest that followed left Wilson isolated, save for the financial press and other ruling class insiders and associated public figures.

Chris Deerin, a former Daily Record Political Editor and Herald columnist and another CSP founding figure (and arch unionist) notably rallied to its defence. First in print, then on stage at the Growth Commissions launch in Edinburgh. Few in the press or politics thought it necessary to point to the pair’s  professional relations.

Gerry Hassan, who has himself interviewed members of Scotland’s elite dinner party set, attending events which have been hosted by high society types including the influential banker (and CSP chairman) Sir Angus Grossart, notes that it is this small social element which came to the defence of Wilson:

“The sort of people who have been the most supportive of the Growth Commission are the kind of people you might describe as ‘bourgeois nationalists’, the insider class types, the Keith Browns, the Harry Burns’ – people who have a stake in a sort of nascent Scottish state basically.”

These figures present all the hallmarks of the flex network model. Wilson himself is the very archetype – he has worked in the civil service, politics (as an SNP MSP), in the banking sector (in RBS) as well as CSP. His networks therefore congeal together these different worlds, and help to form a relative consensus of opinion between them. Much the same goes for other figures even at CSP, like Angus Grossart and Kevin Pringle – former SNP strategist. And CSP is one of dozens of similar institutions, if an important one in the networking of the Scottish ruling class.

And these figures also reflect the Scottish economy, in both its strengths and its structural weaknesses. The Scottish economy is dominated by the institutional signs of British neoliberalism – the big financial houses and the privatised utilities. Energy and water, transport and banking loom large not just in the economy, but on the CVs of the networkers and in the halls of power.

Many of these industries are foreign owned, and Scotland’s economy as a whole suffers greater foreign ownership than the UK economy.

This points to a weakness in the cross-class approach for Hassan:

“There’s no autonomous Scottish economy as such.

“How much autonomous Scottish capital would there be to back independence, even if they were so minded?” This is why Hassan feels that an independence scenario involving “elite capture” of the independence movement seems a relative improbability.

More likely is the scenario where moving the cause of independence into an elite frame simply chops away at working class support without securing the leading forces in the business community – who would continue to lambast future independence campaigns with ‘project fear’.

The reasons why the capitalist class, in their large majority, oppose constitutional ruptures like Scottish independence and Brexit are not always as assumed, according to Miller:

“The stability thing is a bit over used as an argument. They like instability when they can use it to their advantage. They can destabilise the opposition, or break up state monopolies.”

This is another reason why Scotland’s wealthy and powerful networks are resistant to independence. As it is, Scotland is a playground for the unaccountable. Wilson and the Growth Commission represent an attempt to bridge that gap between independence and elite unease about the prospect, something which is likely to be a doomed project.

This is a situation reinforced by what Gerry Hassan has described as the ‘court’ or patronage style of Scottish high society:

“Scotland has never been a fully fledged democracy.

“The White Paper itself was emblematic of that patronage society – much was given to the rich, but it was also something looking back to an earlier world, one of stability and hierarchy. There is a contradiction between that and the sort of disputatious Scotland that emerged during the indyref. That is going to become one of the major fault-lines in the independence movement.”

Subsequent events suggest that the Growth Commission is worse than a degeneration from the White Paper. It is taking on the form of a general strategy for the ruling class, not just in an independent future, but under the current devolved settlement.

A version of the commission has been launched by another important elite think tank, Reform Scotland. Authored by Dr David Skilling, who sat on the Growth Commission board, the paper ‘Policy insights for Scotland from small advanced nations’ lays out the logic of its origin paper in more fulsome scope. The project will involve, among other things, new tax breaks for the richest Scots – making deeper cuts to public services absolutely inevitable. The launch was attended but senior representatives of all three of Scotland’s major parties and, not great surprise, one Chris Deerin, the new director of the corporate backed Reform Scotland.

This moving and shifting of political priorities and friends to maximise leverage is typical and often without scruples. In wake of Donald Trump’s election to the US presidency, his former far-right propagandist Steve Bannon came to Scotland on the invitation of Grossart. Earlier in 2017, Charlotte Street Partners were revealed by The Ferret to be lobbying on behalf of Rupert Murdoch owned newspapers. Wilson and fellow CSP staffer Pringle happen to have written columns for one of Murdoch’s papers – The Times.

Social class isn’t rhetoric, or an abstract conceptual frame for understanding the world. The ruling class are real flesh and blood people, and they want a Scotland in their interests.

What’s more, they own the country. They own its banks, corporations, utilities and media, they own its shrivelled public square. Winning independence on their prospectus, on the basis that it can be done away with through the ballot box later, does not adequately account for the material reality of class, and the experience of the dysfunction of the UK. Scotland’s networkers are more than hoping you’ll follow their lead. They are literally banking on it.