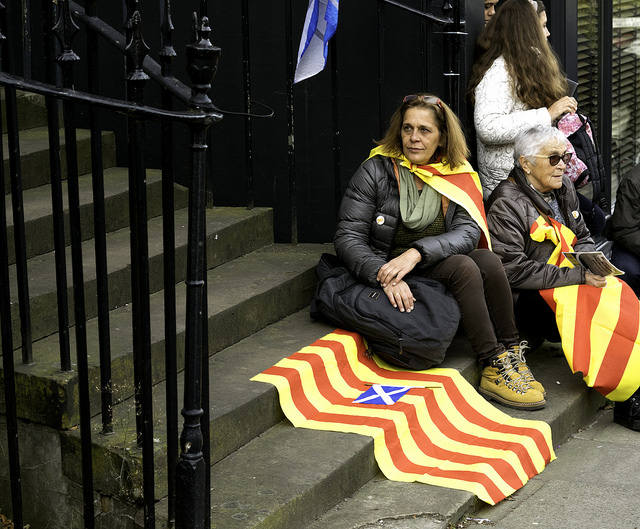 THE CATALAN NATIONAL ASSEMBLY (ANC) OF SCOTLAND will reflect the politicised nature of the most recent La Diada de Santi Jordi, the celebration of Saint George observed throughout Catalonia, by honouring those “being held in prison for their political ideas”.

At a special event held at Glasgow University’s Queen Margaret Union on Saturday, 28 April, ANC Scotland will host an evening of discussion and music themed around Catalonia’s present struggle.

The Sant Jordi event will begin with a panel discussion on civil rights in Catalonia, chaired by Aamer Anwar, the noted human rights advocate and solicitor of the embattled Catalan academic Clara Ponsati, currently fighting attempts to extradite her to face charges relating to her involvement in the 2017 Catalan independence referendum.

Other speakers include SNP MSP for Glasgow Kelvin Sandra White, Scottish Greens co-convener Maggie Chapman and Jonathon Shafi, founding member of the Catalan Defence Committee Scotland, which will be supporting the event.

Following the panel, Valencian singer-songwriter Pau Alabajos will perform selections from his latest album ‘Ciutat a cau d’orella’, on which he sings poems by Vicent Andrés Estellés, widely considered to be one of the 20th century’s most significant Catalan-language poets.

The event will begin at 3pm in Jim’s Bar in the Queen Margaret Union at 22 University Gardens, Glasgow.

La Diada de Santi Jordi, sometimes known simply as Sant Jordi, El Dia de la Rosa (the Day of the Rose) or El Dia del Libre (the Day of the Book) recognises Catalonia’s patron saint and is traditionally celebrated by an exchange of books and roses on 23 April.

In central Barcelona, the day was marked by hundreds of yellow roses – yellow having become associated with the Catalan independence movement – being placed around a banner reading “Free political prisoners”, in reference to the multiple Catalan politicians and grassroots leaders who remain incarcerated by Spanish authorities for their role in the independence referendum and the subsequent declaration of the Catalan republic.

Yellow ribbons have also been placed on the empty chairs of imprisoned MPs in the Catalan Parliament to honour their absence, and have been worn by figures including Manchester City manager Pep Guardiola, who received a fine as a result.