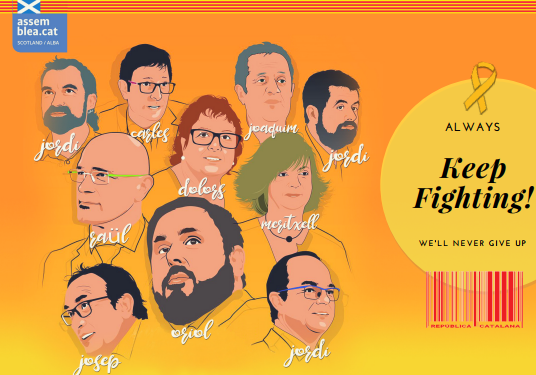 A POSTCARD CAMPAIGN calling for supporters to send messages of solidarity to Catalan political prisoners has been launched by the Scottish branch of the Catalan National Assembly (ANC), in partnership with with Yes Scotland’s Future, Independence Live, English Scots for Yes, Catalan Defence Committee Scotland, SNP Youth, SNP Friends of Catalonia and Ungagged.

Branded #DearCatalonia, the campaign seeks to show support to the political prisoners and to raise awareness of the actions of the Spanish state in imprisoning pro-independence Catalan government ministers following the referendum in October this year.

A website has been set up with information on the campaign, where the addresses for each of the prisoners can be found, along with a postcard which can be downloaded.

Oriol Roig Vilaseca, who comes from Barcelona and now lives in Glasgow, has been involved with ANC Scotland since it was revived in April this year and has played a key role in developing the campaign. Speaking to CommonSpace, Vilaseca said that the campaign aimed to show the prisoners that “they are not alone, not only in Catalonia, but also in Scotland”.

Sending letters to political prisoners is a “massive thing” in Catalonia, Vilaseca said, and ANC Scotland found that Scottish people were increasingly interested sending their own messages of support.

“Here in Scotland, people were asking for the addresses of the prisoners,” Vilaseca explained. “For example, at the Scottish Independence Convention conference in Edinburgh, someone had printed all the addresses.”

“So we saw that this was something that a lot of Scots wanted to do.”

From there, the organisation teamed up with Scottish independence and Catalan solidarity groups to launch the #DearCatalonia campaign.

Vilaseca said he had been surprised by the level of interest and solidarity shown towards Catalonia in Scotland. “It will never cease to impress me, and I can’t be more grateful and thankful,” he said.

“When I first arrived here, I was very surprised to see lots of Catalan flags in houses for example.”

“But then I remembered when you had your referendum in 2014, there were Scottish flags in Catalonia.”

This, Vilaseca said, is because the two movements for independence are “very familiar”. With both movements struggling in their own ways for self-determination, it’s natural that “solidarity just appears”, he said.

Despite this obvious affinity, Vilaseca said that the campaign is not only for those who support independence. “In Catalonia, we are talking about democracy, about human rights,” he said.

“Whether or not you support independence, you are a democrat. Believing in human rights is the only thing you need to send these postcards.”