THE Scottish Conservatives have produced research reported in The Herald and The Times today [8 May] which claims to show that the SNP has missed its own economic targets since it first entered office in 2007, which “amount to more than £80bn” lost to the Scottish economy.

“SNP Government fell £80bn short of its economic targets last year, according to research by the Scottish Conservatives,” The Herald article begins.

“Nicola Sturgeon’s government has cost the Scottish economy £80 billion in lost revenue by missing its five main economic targets, the Conservatives have claimed,” The Times stated.

The £80bn figure was then repeated by Tory MSP Dean Lockhart in a debate in the Scottish Parliament on Tuesday about the Scottish economy.

CommonSpace has analysed the research and found that this clearly doesn’t stack up – with the most obvious problem being double-counting: numbers that relate to the same economic activity being counted more than once.

To get to the £80bn total, the Tories use the following table:

The first two targets relate to Scottish GDP relative to the rest of UK and Scottish GDP relative to smaller EU countries, but of course in each case this is the same Scottish GDP being referred to over the same period of time, just with different points of comparison. This is therefore the most obvious example of double counting in the table. It’s the equivalent of stating that a marathon runner aiming to break the European and world records, who then finishes one minute behind the European record and two minutes behind the world record, was three minutes off her target – obviously incorrect.

But points three and four – missing targets on exports and productivity – also directly relate to GDP: productivity is considered by economists to be one of the main factors which influence a country’s GDP per capita, while it is obvious that less exports is likely to reduce the size of a country’s GDP. Therefore adding missing productivity and missing exports as separate and additional to missing GDP is also highly misleading.

The final point – on missing research & development funding – pertains to total investment from the private and public sector in R&D, but this does not tell us anything about the economic impact of such R&D investment in Scotland. While R&D investment does have a sizeable impact on GDP, the Conservatives have not researched what this is. It is therefore again misleading to have the £0.6bn figure added together with the other figures as it pertains to investment not economic outputs.

READ MORE – Analysis: The importance of garbage getting put in its place

Beyond these basic errors, the research is of course entirely one sided. Except from point 1, it does not compare Scottish economic performance since 2007 with rest of UK performance (weak Scottish productivity and exports is similar to that south of the border, with the main difference being a significant fall in oil exports). Considering 2007 targets were obviously set pre-financial crisis, this lack of context creates a skewed picture.

The research also does not account for UK Government responsibility for Scottish economic development – given the UK Government has power over the main monetary and fiscal levers which affect the Scottish economy, and a number of the secondary levers (company law, financial services, the energy grid, rail infrastructure, control of local authority borrowing limits, corporation tax, immigration, key aspects of social security, pensions and the minimum wage, to name a few) then it is somewhat rich for the Scottish Conservative shadow Finance Secretary, Murdo Fraser MSP, to describe poor economic performance as entirely the SNP’s “failure”.

Indeed, point 2 – the comparison between the Scottish economy and that of small EU countries – could easily be taken as a case for Scotland being an independent country with full control over economic levers, since nation-states of a similar size are on at least some metrics performing better than Scotland in the UK.

There is also good reason to believe that there is unique characteristics of the UK economy which holds Scotland back – namely that it is the most regionally unequal country in Europe, with the City of London acting as “a great suction machine”, as Lib Dem leader Vince Cable once put it, of financialisation, pulling in resources from other parts of the UK into its orbit, which drives the economy towards high asset prices and high private indebtedness, and away from productive economic development.

The unique dimensions of the UK’s regionally unequal economy is perhaps best depicted in this graph from the Inequality Briefing. 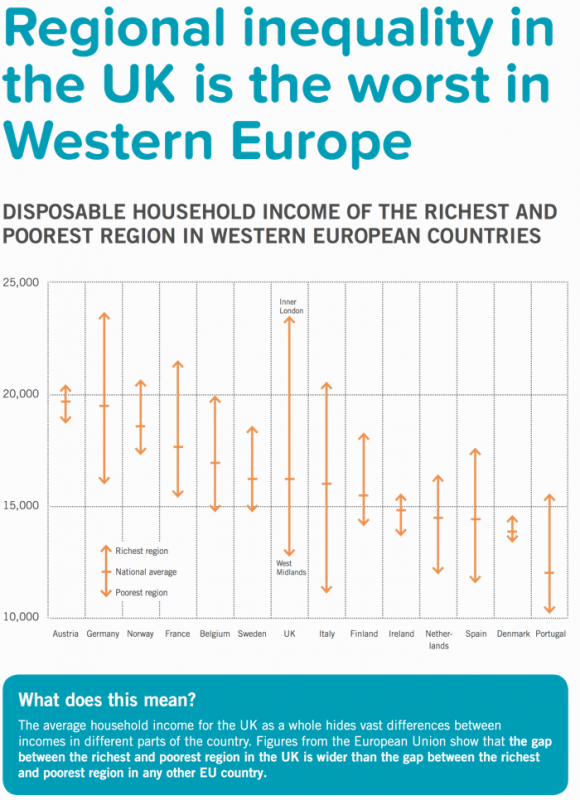 One thing to note from this graph is the poorest region in the UK – the West Midlands, not Scotland. In fact Scotland is above average if the UK is broken down by region, but the important thing is the huge and growing divergence between London and the South-East and the rest of the UK. If the Tories or any Scottish politicians want to identify reasons for poor economic performance, the UK’s regional inequality may be a better place to start.