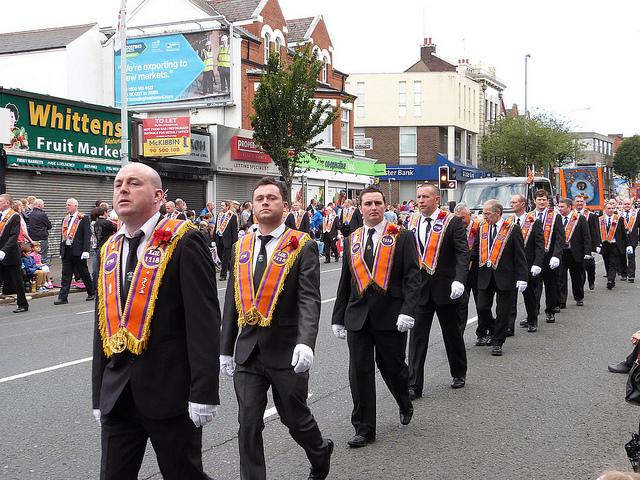 DISINIGRATING, politically impotent and being left behind by centralisation in Scotland. Paramount historian Professor Sir Tom Devine described the Grand Orange Order of Scotland during a frank interview with Common Space.

He said: “I want to stress to you is how really innocuous the orange order is. Less than one per cent of Scottish Protestant males belong to it.” 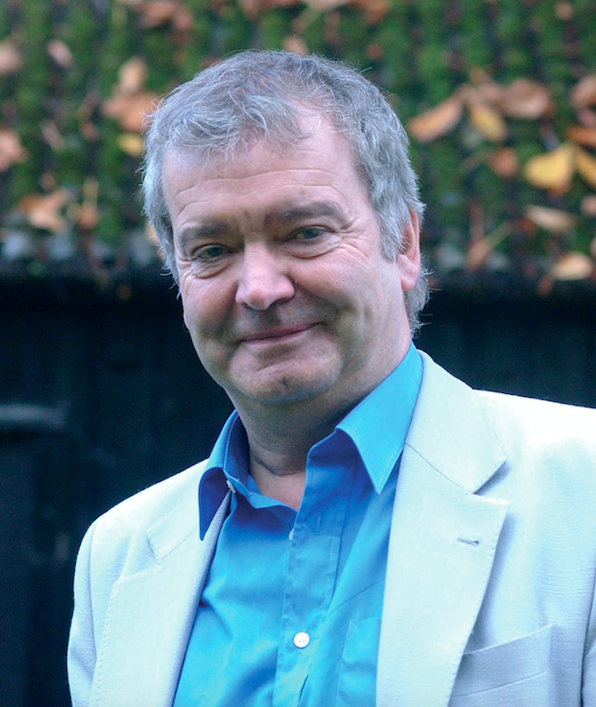 In the wake of recent allegations of the famine song ricocheting on the streets of Glasgow during the annual parades in July and images of partygoers depicting horrific images including the hanging of the Pope, Sir Tom Devine stressed the difference between the official Orange Order and hangers-on it attracts.

“They have very much tried to control the behaviour of bands returning on the Stena Link ferries from Northern Ireland who have caused disgraceful incidents in the past.” Sir Tom Devine

He said: “Here we come to one of the big conundrums of the orange phenomenon.

“It’s clear from the minutes of the grand lodge over the last 10/15/20 years they are doing everything, well almost everything, to distance the official order from what they call a ‘rough element.

“They are probably not members of the order at all but they’re sectarian instincts, because they are sectarian, attract them to the parades and its part of a kind of complexity of influences which include obviously a certain football team and the other aspect of course is the annual parades.

“If you look at what they (official Orange Order) have tried to do, they have very much tried to control the behaviour of bands returning on the Stena Line ferries from Northern Ireland who have caused disgraceful incidents in the past.

“The difficulty is deciding what is orange order activity and what is the activity of; a) the bands, who are not orangemen and b) this element of onlookers as it where which tend to surface during the parade season.

“It’s very important to point out that they are aware of this division.” Sir Tom Devine

Founded in 1795, The Loyal Orange Institution was set up as a ‘defensive organisation’ to protect the homes of protestants after the Battle of Diamond in Armagh whilst the first lodges in Scotland were formed in Ayrshire in 1798.

“Sir Tom believes the founding principle could be an explanation as to why the organisation attracts the ‘rough element,’

he said: “It could be, you could argue, that because essentially the orange order was founded as a Protestant defensive organisation primarily against Catholics then however hard it tries, it may well still attract this element.

“The word ‘defensive’ organisation is pretty dam close to being anti-Catholic organisation but I’m sure there is variety and you’ll also find variety of members of the grand lodge on this issue.

The wave of ‘organism’ that swept the country in subsequent years never engulfed Scotland as the intention may have been and the geographical existence of the group today is much the same as the 1790s, Sir Tom said: “The heartland is still the west.

“Parts of Glasgow, North Lanarkshire and Ayrshire and to a limited extent Renfrewshire.

“But the interesting thing about the east is, the only stronghold if you can call it that and again even the stronghold areas your talking about less than ten percent of Protestant men (are members) and when I say strongholds I mean wards.

“I’m not even talking about counties or districts, the geographical distribution and especially symbolised by West Lothian demonstrates that the root of the order is Northern Irish.

“The ancestry of the Loyal Orange Lodge right back to the 1790s was a Northern Irish importation. What historians have recently discovered is a quarter to a third of those Irish who immigrated to Scotia in the 19 century were Protestant Ulster people from Antrim and Down.

“Ironically enough many of them probably defected from Scots immigrants to Ireland in the 17 century. Now if you look at the areas, areas pinpointing where the lodges are they exactly replicate areas of traditional Protestant Irish settlement.

“I just wonder how many, not so much the Orangemen, but the rank and file are aware of that historical background.” Sir Tom Devine

“The well-known names for example; Airdrie, Larkhall, West Lothian places like that and the fascinating thing is the connection with Northern Ireland still goes on in terms of people still going across and I just wonder how many, not so much the Orangemen, but the rank and file are aware of that historical background.

“So essentially, the people who still march are mainly, not exclusively but mainly third/ fourth/ fifth generation families with that kind of heritage – that Ulster Protestant heritage – and that of course further underscores the point that I’m making – demographically its an irrelevance.

“It has no political clout, it may attract attention from journalists but that’s about it.”

Fresh allegations of sectarian behaviour of people associated with the Orange Order prompted Police Scotland to launch two separate investigations, however as of yet no arrests have been made.

Common Space contacted every major political party in Scotland in regard to both incidents.

The famine song during the annual orange parades in Glasgow popped up on Twitter.

Whilst pictures of a Halloween party inside an Orange Lodge hall in Airdrie where pictures of two men simulating sex with a toy wearing a Celtic strip were revealed by the Sunday Herald.

Only Liberal Democrat MP Christine Jardine responded, she said: “This behaviour is absolutely sickening. There should be a zero-tolerance approach to sectarianism.

“I’m sure Police Scotland will be looking closely at these incidents to determine whether any offence has been committed and what action should be taken.

“Tackling sectarianism is everyone’s responsibility but it is essential that the Scottish Government, local authorities and the police play a leading role in educating people on the corrosive impact that it has on communities.”

We hit a wall of silence when contacting the SNP, Scottish Conservatives and the Scottish Green Party.

Interestingly, the Grand Orange Lodge of Scotland themselves condemned the both incidents, Executive Officer Robert McLean said: “We’ve been quite clear right from the word go on the Sunday Herald article and the famine song.

“I’ve been quite clear that we will sit down with the police and assist them with their enquiries.”

A Police Scotland spokesperson said: “There have been no arrests but enquiries are ongoing.”

Sir Tom’s theory is that the political parties may prefer not to give the Orange Order any more oxygen and added that society in general is leaving the organisation in the past.

Furthermore, the expert added the organisation no longer has the power to influence society and has lost the ‘grand’ aura it once possessed.

Sir Tom said: “They have no support now in the way they had up until the 1970s from the Conservative Party, they attract opprobrium from the length and breadth of Scottish society both in both the social media and the letters pages of newspapers.

“The point is its shrunk. It reached a peak in the 1980s during at the time of the troubles, and its gone into decline since then.

“The other thing about it is, some people looking at those parades have commented ‘oh they’re just poor souls’ and to some extent that’s a class analysis but it’s broadly correct.

“One of the things that differentiates the Scottish, and I’m now talking about the formal orange order, and its NI equivalent is that it’s overwhelmingly working class.

“It’s got hardly any middle-class professional element in it, there are a few but very few, and they normally reach the leadership level so they may give a spurious impression of the majority and not only working class but I think the last data I saw which was in 2011 census and the work done by some scholars on it, probably most of the working-class element are unskilled.

“But the other thing is its been left behind by the social and economic changes of Scotland society. Scotland is now by and large a middle class based society, the old working class is now a minority.

“You might say that if you’re wearing a collar and tie you might still be getting poor wages by working in a call centre, but nevertheless the old industries are gone there has been a transformation in relation to finance, tourism, government employment, health service and oil, related industry etc. this is the new Scotland and members of the Orange Order don’t seem to be critically associated with that new Scotland.”

“The difficulty is the waves are coming in onto the beach if you like and its very hard to stop them.” Sir Tom Devine

Sir Tom concluded by saying: “It’s basically a form of identity expression. The difficulty is the waves are coming in onto the beach if you like and it’s very hard to stop them.

“The one thing which I do think helps to keep the thing alive is the fact that the Northern Ireland situation is not yet settled and of course Scottish nationalism and the threat to the union has given it a fill up as well.

“It’s quite sad in a way because if it a form of identity formation, which I think it is, and people trying to preserve parts of their heritage, the economic base of that heritage is either disintegrating or already has disintegrated.”

Pictures courtesy of Sam Woodcock, Twitter, The University of Edinburgh.