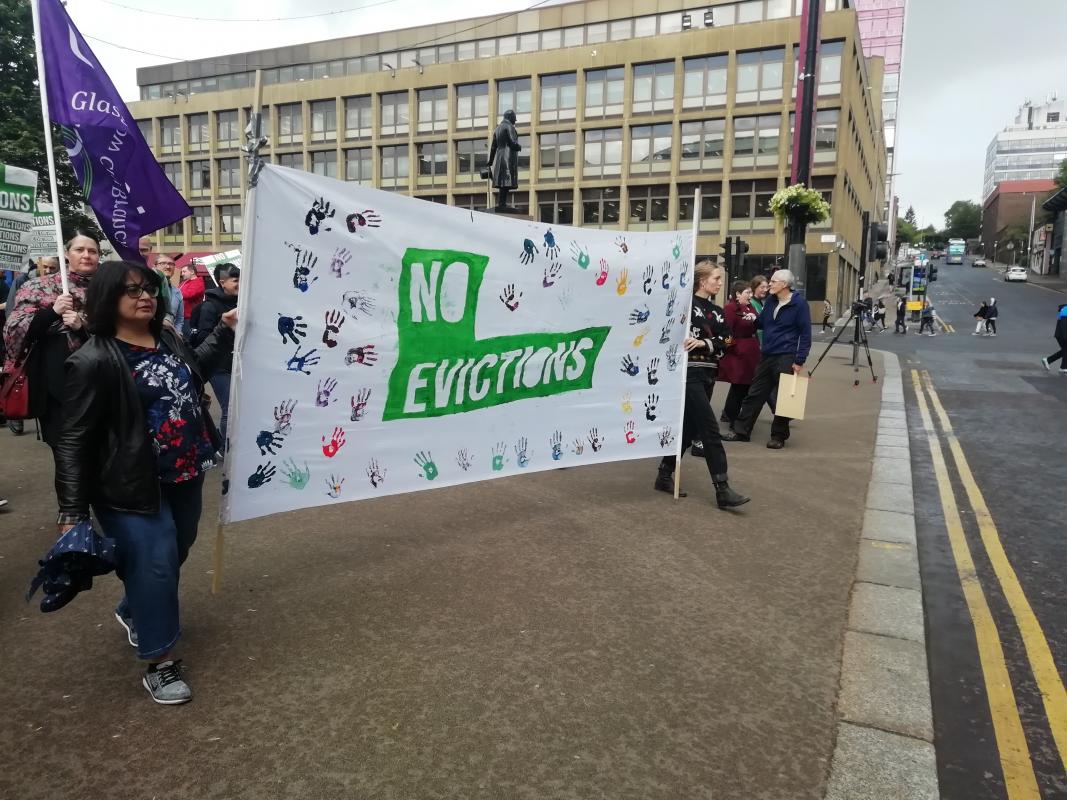 Living Rent: “Should Glasgow City Council fail to support our friends and neighbours at this critical point, we are prepared to escalate our actions”

AROUND 100 people demonstrated at Glasgow City Council’s headquarters on Tuesday afternoon [20 August], calling on the Council to ensure no asylum seeker in the city is left destitute.

The protest comes as outsourcing giant Serco continues to pursue the eviction of 300 asylum seekers in the city from their homes, despite over 50 such attempts being blocked by the courts after lawyers acting on behalf of the asylum seekers intervened. Three asylum seekers have been evicted so far.

The SNP-led Council is opposed to the evictions and have written to the Home Office to intervene to stop them, a request that has been refused by new Home Secretary Priti Patel. But they have said they are unable to provide housing accommodation for asylum seekers due to the No Recourse to Public Funds rule, which is intended to prohibit asylum seekers who have had their request for asylum rejected from accessing public money.

However, anti-eviction campaigners said that despite No Recourse to Public Funds, the local authority could guarantee emergency accommodation for those who need it.

Living Rent Glasgow submitted a letter to Council leader Susan Aitken at the beginning of the protest.

The letter states: “We are writing today to ask you as leader of Glasgow City Council to commit the council to provide emergency accommodation for asylum seekers and refugees who will be made homeless and destitute by Serco’s evictions through lock changes.

“You have previously stated that providing housing to anyone who does not have Recourse to Public Funds would ‘break the law’, however, Cosla guidelines published in February 2019 state that public funds can be used for emergency accommodation.”

The letter goes on: “We urge the council to defy and confront the Home Office by providing emergency accommodation. Living Rent will support the council if it takes this action to solve this crisis.

“However, should Glasgow City Council fail to support our friends and neighbours at this critical point, we are prepared to escalate our actions and defend their rights and thus further the safety, security and right to a home for everyone in Glasgow.”

Following the handing in of the letter, demonstrators formed a “human chain” around the City Chambers building in a symbolic “lock-in”.

Commenting at the demonstration, Chris Stephens, SNP MP for Glasgow South-West, told CommonSpace that “there should be no evictions in the city” and said the Council “should be given emergency powers so they can provide accommodation for asylum seekers who have been unfairly evicted”.

SNP MP for Glasgow South-West @ChrisStephens says that all Glaswegians have to stand together to ensure no asylum seekers in the city go homeless. #NoEvictions pic.twitter.com/oNmVpTGTRa

Scottish Greens MSP Patrick Harvie, also speaking at the demonstration, said that “the Council and Scottish Government need to step up where the UK Government won’t”.

He added: “There’s no letting the UK Government off the hook, but we need to take responsibility for the humanitarian crisis being created here unnecessarily in the streets of our city”.

.@patrickharvie says asylum seekers have been failed by the UK Government, but the Scottish Government and Glasgow City Council have to step up. #noevictions pic.twitter.com/j06mhsSRC7

Smina Akhtar of the #NoEvictions campaign says the Council can provide emergency accommodation for asylum seekers evicted by Serco. pic.twitter.com/2xZB04hcXM

Following the demonstration, Cllr Long, who ran a successful campaign last year to prevent the deportation of an asylum seeker in her ward, called on “the Council and Scottish Government to do what they’ve already committed to and guarantee an emergency housing safety net for anyone faced with eviction. This has to be a clear and unequivocal priority for the Council right now.”

Serco have stated the lock changes are necessary due to the refugees failing their asylum requests. However, charities say many of those facing eviction still have appeals ongoing. Serco are set to hand over the contract for housing asylum seekers to Mears group in September.

A Council-established Asylum Task Force published a report in February which made a series of recommendations for how to address the lock changes issue, but did not make a specific proposal for how the Council should respond if asylum seekers are evicted. In a footnote on No Recourse to Public Funds, the task force “agreed that there was no blanket ban on using non-listed forms of public money to assist persons described as having no recourse to public funds”.

A COSLA spokesperson said:  ”Obviously COSLA would never usually comment on an individual council nor indeed give an opinion on what a council should and shouldn’t provide.  However what we can say is that in terms of the joint Scottish Government and COSLA Guidance – public funds can only be used for emergency accommodation if the individual has been through a human rights and community care needs assessment and meets a vulnerability threshold and we understand that the vulnerability threshold has not been met in this case.”

In response to Living Rent’s letter, Glasgow City Council leader Susan Aitken said: “If we had the powers to provide all of those facing eviction by the Home Office with accommodation we would do so.

“We have and will continue to provide support to asylum seekers using the limited powers available to us and will always push this law to its limits. We have spent millions of pounds over the years providing this support.

“Where we do use funds to provide accommodation and support for asylum seekers with no recourse to public funds we do so using our ‘power of welfare’ powers.

“But we cannot provide or indeed commission accommodation and support for those impacted because the No Recourse to Public Funds legislation implemented and maintained by successive UK Governments explicitly prevents local authorities, and others, from doing so.

“We would be deemed by the Home Office to be in breach of the law by assisting those who they have deemed to be failed asylum seekers whose needs do not go beyond destitution. In particular, UK legislation prevents us from using public funds to support people who have been refused right to remain and exhausted the appeals process and their need for assistance has arisen solely due to destitution.

“I would be instructing council employees to break the law.  Politicians would not face potential prosecution. This dreadful legislation, explicitly designed to tie our hands, means social work staff would.

“It would be entirely unacceptable for me or any other Glasgow politician to demand that our frontline staff put themselves in such an impossible position, particularly when they are already doing everything they already can to support the most vulnerable.

“It is this legislation and Home Office failure to provide a humanitarian response to those people who are refused asylum which should be the target of this outrage.

“The Council continues to lobby Boris Johnson, Priti Patel and their colleagues in the UK Government to give us the legal power to make the difference to tackle this crisis which is not of our own making.”