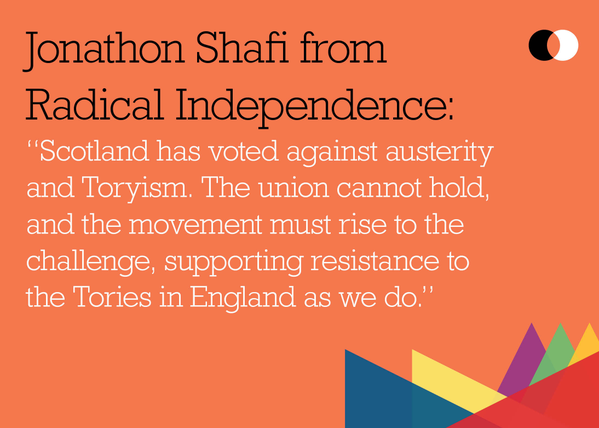 ACROSS Scotland the SNP were celebrating. But some had mixed emotions as the reality of Tory gains in England and Wales ushered in a Conservative majority government.

Here are some reactions.

“I’m simultaneously delighted for the results in Scotland, and horrified at the prospect of a Tory majority government (though it’s worth noting for the Labour zealots that even if Scotland had returned 59 Labour MPs, the Tories would still have a majority); and once again, for the umpteenth election in a row, Scotland’s votes haven’t changed the governing party in the UK. Are we better together yet? The English Left needs to get a fucking grip of itself.”

“My heart is bursting for Scotland but breaking for the UK.

“It now may be the job of Scottish women to sort out the Westminster government.”

Sophie Collins (Leeds) who campaigned for the Green Party

“Today, my politics became deeply personal. This country, including most people I grew up with, have not bothered to think outside their own small lives. To vote in the Tories is an act of aggression on vulnerable people, and I am struggling to consider this as anything other than repulsive.”

“The SNP landslide shows that the people of Scotland have recognised that the Westminster parties do not, and have not been, working in the interests of the people. But despite Scotland voting overwhelmingly against the Conservatives, we are still faced with the prospect of another Conservative government for the next 5 years.

“We must hope that the progressive parties across the UK can come together to limit the potential damage that will cause. Also, if we can push for constitutional and electoral reform out of this that would be pretty awesome.”

“The movement needed to challenge the Tories now needs to be massive. That goes without saying, but this is the biggest test for the Left in general for a very long time. Everything is at stake. It feels like we are entering the final phase of capitalist restoration after World War 2. Everything working people have won since then is to be taken away and reversed. There is no option but to fight – and do so as quickly as possible.”

“In addition, the movement in Scotland should consider campaigning for another referendum within the next 5 years in order to open a direct face off with the Tories at this critical moment in the long project of the British ruling class to subordinate entirely the demands of working people. This would also open space for the Left in England to mobilise and reconfigure.”