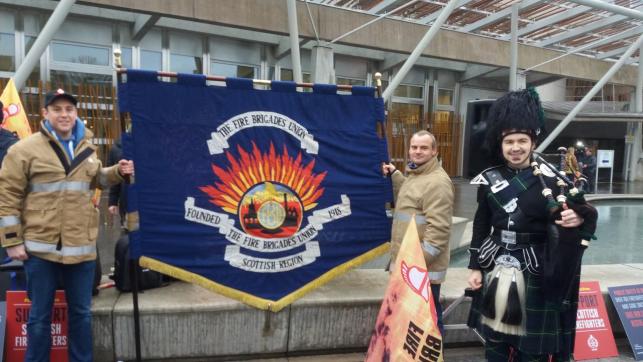 THE Fire Brigades Union (FBU) Scotland has hit back at attempts to “scapegoat” the emergency response to the 2017 Grenfell disaster, following the publication today [30 October] of the official report of the public inquiry set up to investigate the tragic inferno.

The inquiry’s main participants signed non-disclosure agreements earlier this week, which was intended to allow the bereaved, survivors and residents of Grenfell, as well as other relevant parties such as the firefighters who responded to the blaze, sufficient time to digest the report’s findings ahead of its publication.

However, the embargo was broken yesterday [29 October] when details of the report were leaked and subsequently published by the Daily Telegraph newspaper. The Telegraph revealed that the report concluded “serious shortcomings” had hindered the fire service’s response to Grenfell, and that fewer people might have died in the fire if residents had been evacuated earlier. The campaign group Grenfell United, which represents survivors and residents of Grenfell, condemned the leak as “unacceptable”.

Upon the report’s official publication today, the FBU has responded to its criticism by calling for a new body responsible for all fire and rescue service policy across the UK, and defending firefighters who acted in “impossible circumstances”.

“When the public are in time of need, firefighters are there to support. Now we are asking if the public will stand side by side with us and condemn this unjustified attack.” FBU Scottish secretary Denise Christie

An emergency motion was submitted by FBU Scotland to the Scottish Trades Union Congress (STUC) women’s conference yesterday and seconded by the Unite trade union, defending the fire service response to Grenfell and reiterating the FBU’s warnings over the dangers of flammable cladding.

The motion, which was passed unanimously, read: “That this conference notes the publication on Monday 28th October 2019 of the public inquiry into the Grenfell Tower fire and the media reports on the same day where firefighters have been warned they are facing criticism for the tragic events that happened on the night of 14 June 2017 at Grenfell Tower.

“Since the Garnock Court fire in Ayr in 1999, the FBU warned all governments of the dangers of flammable cladding. The Scottish Parliament listened and changed legislation when other governments ignored.

“Deregulation of building safety standards, the dismantling of the fire and rescue service and the decades of the lack of investment in safe housing by governments are to blame.

“Firefighters must not be used as scapegoats for this horrific fire. This conference asks the STUC women’s committee to support the FBU’s campaign for Justice for Grenfell and sends a message of solidarity from this conference to all firefighters impacted by Grenfell where many of them risked their lives to save as many residents as they could.”

READ MORE: Editorial: Two years after Grenfell, the need to resist the class warfare of the rich is paramount

Speaking to CommonSpace, FBU Scottish Secretary Denise Christie said: “The Grenfell bereaved families, residents and community have an entirely justified anger and [are] crying out for answers. We in the FBU stand with them and will leave no stone unturned to get them justice.

“It is an utter disgrace that firefighters are being made scapegoats for decades of failures by central governments and politicians. The FBU’s motion at STUC women’s conference passed unanimously and showed the strength of solidarity from our movement to all firefighters involved in the tragic events of Grenfell.

“When the public are in time of need, firefighters are there to support. Now we are asking if the public will stand side by side with us and condemn this unjustified attack on public service workers and demand justice for Grenfell.”

Commenting on the report’s publication today, FBU general secretary Matt Wrack added: “The Inquiry’s interim report must finally be a turning point for fire safety in the UK.

“The true culprits of the fire are those who wrapped the building in flammable cladding, who gutted the UK’s fire safety regime, who ignored the warnings from previous fires, and who did not hear the pleas of a community worried for their safety.” FBU general secretary Matt Wrack

“Warning after warning from previous fires were ignored. Central government must now take responsibility for ensuring that recommendations are applied nationwide, not just in London — this has never simply been a matter for the London Fire Brigade. That change can only be achieved by establishing a new, credible and accountable body responsible for fire and rescue service policy in the UK.

“Firefighters stand in solidarity with the bereaved, survivors and residents and share their grief for the lives lost that night. They have an absolute right to ask difficult questions.

“However, we have said from the start that the order of issues to be investigated has been entirely wrong. The Inquiry’s structure prioritises scrutiny of firefighters, who did everything that they could to save lives, over investigating the critical issues of public safety that led to the fire and caused it to spread in such a disastrous manner.

“Before any firefighter arrived that night, Grenfell Tower was a death trap. Firefighters that night acted bravely in impossible circumstances, many of them repeatedly risking their own lives to save others. We welcome that this is reflected in the Inquiry’s report.

Wrack continued: “We strongly refute the report’s assertion that it would have been possible or safe to evacuate more than 150 people via a narrow smoke-logged stairwell with just 30 firefighters. There is no evidence to suggest that this was possible. It is particularly alarming that the Inquiry failed on this issue to seek the advice of its own expert advisor on firefighting matters. There is therefore currently no way of knowing if evacuation could have saved more lives.

“We are disappointed that the report makes no reference to the vast additional resources needed to implement its recommendations. It’s time for government to provide national leadership, to properly fund and coordinate fire and rescue services and ensure these urgent matters of public safety are addressed.

“The true culprits of the fire are those who wrapped the building in flammable cladding, who gutted the UK’s fire safety regime, who ignored the warnings from previous fires, and who did not hear the pleas of a community worried for their safety. We will be watching phase two of the Inquiry closely to ensure they are held to account. But we cannot wait for years for the Inquiry to conclude. Change is needed now.”