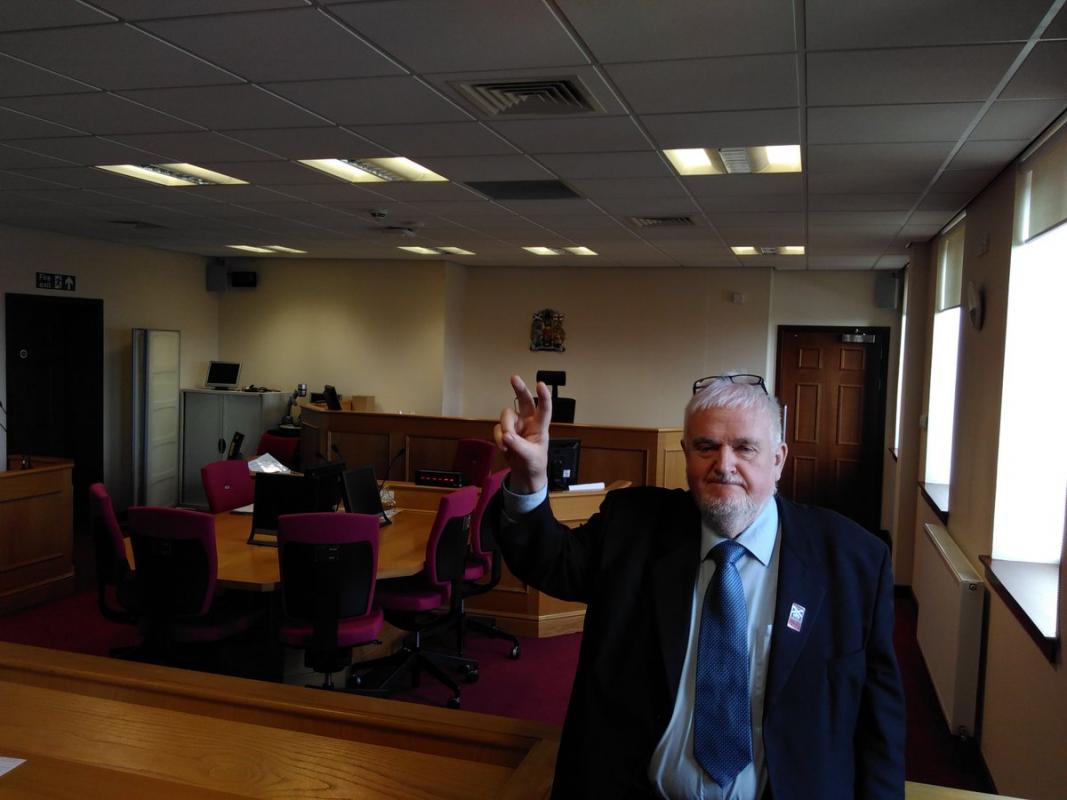 MOMENTUM is growing in support of two anti-Trident protestors being held in remand after refusing  to end their protest activities against the nuclear weapons, which will be banned under international law from September.

Brian Quail, 78, and Angie Zelter 66 – both long time peace and anti-nuclear weapons campaigners, were arrested on 12 July for creating a human road block on a road used to service the Trident nuclear weapons base at Faslane on the Clyde.

Outrage has followed their detention, as the peaceful protesters were obstructing the operation of the Trident nuclear weapon system, which is set to become the subject of an international legal ban from September, established by the agreement of 122 member states of the United Nations on 7 July.

Quail and Zelter refused to agree to stay at least 100 meters from the Trident naval base, which houses the UK’s nuclear weapons.

Quail, a retired Latin teacher wrote a letter to the National expressing his excitement at being in custody again at his age, but insisting that it was Trident in the dock and not the two protestors.

Speaking to Independence Live, Jane Fenton, one of the leaders of the Scottish delegation to the UN that worked to secure the ban, said that the protestors were vindicated and the UK isolated by the international move toward a nuclear bomb free world.

She said: “The UK will be stigmatised will be a pariah state, talk about rogue nations, they will be the rogue nations.

Once it comes into international law they won’t be able to bully boy and threaten.

I just wish Scotland could sign up for it. We should be demanding, even though we are not a member of the united nations, there should be some way in which the Scottish Government and the Scottish Parliament.”

Defending the protest actions she said: “What’s very important for getting governments to take steps is non violent direct action, making it known that things are unacceptable.”

Fenton also levelled criticisms at Scottish justice minister Michael Matheson, and called on him to intervene to stop Scots being arrested for protesting the presence of the UK’s banned weapons in Scotland.

“It’s not the British state that’s locking them up, it’s the Scottish legal system, lets not forget that.

“The question is better posed to Michael Matheson, the justice secretary.

“In what way is this in the public interest in Scotland for people to be locked up for protesting nuclear weapons?” she said.

Funds for the release of Quail are being raised by his former pupil, comic book creator Mark Millar.

The pair refused to sign an undertaking preventing them from returning to the site of the protest, resulting in them being held in remand until a trial can be fixed.

Quail and Zelter pled not guilty to a charge of breach of the piece.

The Scottish Parliament has voted to oppose renewal of the Trident nuclear weapon system, which has an estimated price tag of £205bn.

A petition to free the pair had raised almost 3000 signatures by time of publication.