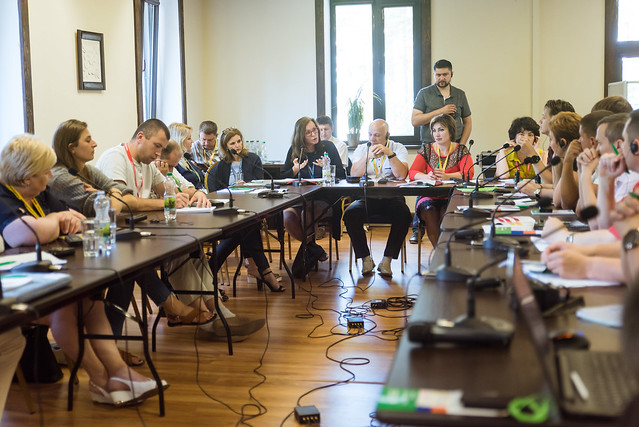 EXPERTS on participatory forms of democracy have welcomed the announcement of the first details of the Scottish Government’s Citizens’ Assembly, but warned that the “devil will be in the detail” in terms of the set-up of the body and what it’s relationship will be to Scotland’s established democratic institutions.

The Scottish Government revealed the first details of the Citizens’ Assembly on Friday [14 June], after First Minister Nicola Sturgeon announced it alongside open talks with other Scottish parties and a Referendum Bill as part of a new three-three-pronged plan to advance constitutional reform.

The Citizens’ Assembly will see delegates picked in a random selection of the public, with 120 people making up the Assembly. According to the Scottish Government, the “individuals will be broadly representative of Scotland’s adult population in terms of age, gender, socio-economic class, ethnic group, geography and political attitudes”. Elected politicians, political party staff and civil servants will be ineligible.

The Assembly will consider three areas:

The idea of citizens’ assemblies has grown rapidly in popularity in recent years following the perceived success of Ireland’s Citizens’ Assembly which began in 2016 and is credited with paving the way for the legalisation of abortion in the Republic of Ireland. They have been promoted by former Prime Minister Gordon Brown among others as one way of tacking the Brexit constitutional crisis.

The Scottish Government’s Constitutional Secretary Michael Russell, who is expected to announced the convener of the Assembly in coming days, said: “This is the first time a Citizens’ Assembly has been used in Scotland and will bring together a wide range of ordinary people from across our country in a genuine attempt to reach consensus on the issues that we face. Similar models have been used successfully in countries including Ireland, Canada, Australia and Poland.

“It is a bold idea and one I hope everyone, whatever their political view, can embrace. I believe we all want the best for Scotland and if we have learnt anything from Brexit it is the need to make space for people to engage with information and to exchange different views.”

Oliver Escobar, senior lecturer in Public Policy at the University of Edinburgh and an expert on deliberative/participative democracy, told CommonSpace that the announcement was “a potential milestone for democratic innovation”, but that the “devil will be in the detail” of how the Assembly is designed.

Escobar said: “This is a momentous announcement – a potential milestone for democratic innovation in Scotland.

“But as ever, the devil will be in the detail of how this temporary institution will be set up. Its legitimacy and effectiveness depends on various factors. I will focus on three.

“Firstly, how will the broader public be included in the conversation? For example, there could be an online crowdsourcing platform to feed evidence and arguments at various stages of the assembly. Also, members of the assembly can be supported to facilitate community meetings in their localities, helping to inform their thinking and contribution during the assembly – a kind of a hub and spokes system that keeps the assembly somewhat connected to the ground across the country.

“Secondly, there must be further clarity about the task/job given to the assembly, because that determines the evidence, speakers and sessions needed to inform deliberation at various stages of the process. This also requires clarity about how the results will be used – what’s the power of the assembly? How to avoid subsequent cherry-picking of the proposals/recommendations? But also how to ensure checks and balances in the way the assembly connects to other parts of our current democratic institutions. All of this is about systemic coherence – the assembly cannot be an island, it needs to be clearly placed in the context of other institutions and how it relates to them.

“Finally, and related, ideally cross-party support should be sought, so that this is treated and built like a civic institution, rather than a political process coming from one party. Some level of cross-party support and contribution may also be desirable for example in the Oversight Board, which is a key mechanism in citizens’ assemblies – it gathers folk from across the spectrum of a debate (as well as some more ‘neutral’ members), and it reviews the evidence presented, the speakers, the different perspectives, the design of the sessions, etc…[to ensure that] they are balanced during the assembly. The Oversight Board is the guarantor of procedural fairness – members may agree or not with the results, but ideally they must agree that the process was fair and balanced.”

Extinction Rebellion has also promoted the idea of a Citizens’ Assembly to address the climate crisis, unveiling a banner calling for one at First Minister’s Questions earlier this year. As part of its Holyrood Rebel Camp, which began yesterday [17 June] and will last for five days, a Climate Citizens’ Assembly will take place on Wednesday morning.

Commenting on the Scottish Government’s announcement, Thomas Swann, a political theorist working on democratic governance, who has written recently on CommonSpace about what the Scottish Government could learn from Iceland’s Citizens Assembly, said: “While there is a lot to be happy about in this plan – such as the attempt at ensuring inclusivity, the financial support for people taking part and the fact that politicians are not able to take part – there is also a lot that is still unclear.

“It isn’t apparent thus far how the participants will be selected, or rather from what pool of possible participants they’ll be drawn. If the electoral roll is used, as is common in these processes, then that immediately excludes people not eligible to vote, such as non-EU, non-Commonwealth immigrants. These people call Scotland home and make real contributions to society. Should they not be involved in this kind of assembly?

“Another concern is how the process will be framed at the start and what status the outcomes will have. Both the beginning and the end of these processes have the potential to severely constrain the scope of the debate. If the range of issues those taking part are asked to discuss and the information they are provided with to help them do so are decided by either politicians or civil servants, then that can already put a restriction on the process. If, coupled with that, the outcomes exist merely as recommendations that, once again, politicians or the civil service vet and sign-off on before they (if at all) go to any further stage of ratification in a referendum, then the process is similarly narrow in potential.

“A Citizens’ Assembly can be a vehicle for real, far-reaching social change. Whether that is going to be possible in Scotland remains to be seen.”

Willie Sullivan, Director of Electoral Reform Society Scotland, which campaigns for more participative forms of democracy at local and national level, said: “We are delighted that the Government has decided to use Citizens’ Assemblies to upgrade Scottish democracy. Scotland’s future and how we relate to the rest of the world (the EU and UK) have shown us that old fashioned party politics and binary vision have failed to provide solutions Scots can unite around.

“The initial structure and the draft questions seem like a good start. Our campaign for more people power at a local level ‘Act as if you own the place‘  has taught us a lot. We know from our own experience and research that the assembly design and the way they are run are crucial for their success. There is a lot of work to do on this and in making sure the Scottish people see the assembly as a trusted proxy; thinking and discussing these issues and arriving at solutions that they would.  We are also glad the Government are keen to hear from experiences here in Scotland and from around the world. Our verdict is so far so good.”

The Common Weal think-tank co-published a report proposing a Citizens’ Assembly as a second chamber for the Scottish Parliament in 2017, and its director, Robin Mcalpine, said: “Common Weal is a big supporter of citizens’ assemblies and has been promoting them for a while. It is great that the Scottish Government is attempting this.

“However these assemblies tend to work best when they are looking at a single, clear question which they have lots of time to explore properly. I worry that these questions are so big and general that it will be very difficult to give them serious exploration in only six weekends. It would be a shame if these were able only to produce very general principles in very broad brushstrokes since that may not do much to move us forward.”

Picture courtesy of Congress of Local and Regional Authorities