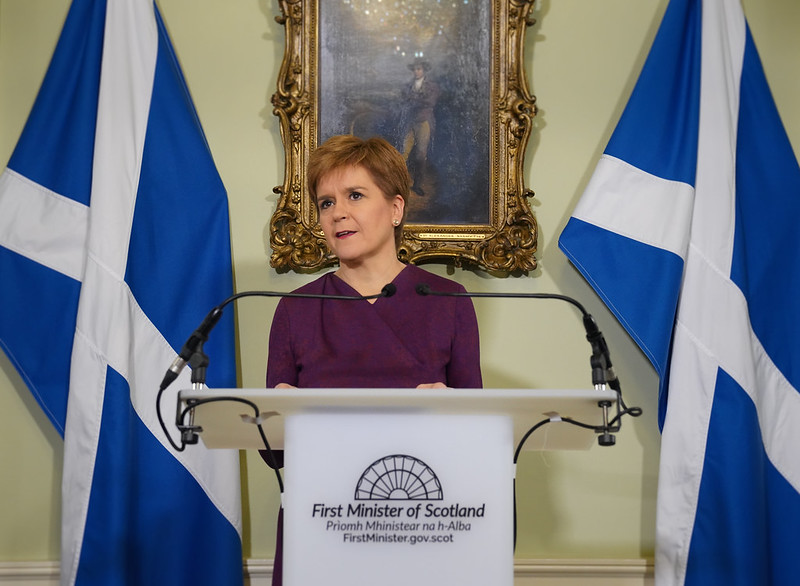 FIRST MINISTER Nicola Sturgeon has officially requested powers over a second referendum to be transferred to Holyrood, with a Scottish Government document laying out the “constitutional and democratic” case.

In a paper unveiled today (19 Dec) – entitled “Scotland’s Right to Choose: Putting Scotland’s Future in Scotland’s Hands” – the SNP government made a “detailed case” for how and why Scotland should be allowed the choice of independence in a referendum.

Sturgeon said there was an “unarguable” mandate, won by the SNP in last weeks General Election as well as at previous elections in 2015, 2016 and 2017.

Read more: Analysis: Gathering storm – why 2020 is set to be a year of tension between Edinburgh and London

Speaking at Bute House in Edinburgh, the First Minister’s official residence, Sturgeon said: “It is a fundamental democratic principle that decisions on Scotland’s constitutional future should rest with the people who live here.

“As this document lays out, the Scottish Government has a clear democratic mandate to offer people a choice on that future in an independence referendum, and the UK Government has a democratic duty to recognise that. Last week’s General Election has only strengthened that mandate.

“Today, I am publishing the constitutional and democratic case for Scotland having that choice.”

The First Minister said the document was “rooted in the principles of self-determination”, saying that in a voluntary association of nations, such as the UK, it “cannot be in the interest of any party for our right to choose our own future to be conditional, or time limited or a one-off.”

She added: “We are therefore today calling for the UK Government to negotiate and agree the transfer of power that would put beyond doubt the Scottish Parliament’s right to legislate for a referendum on independence.

“Together with the constitutional and democratic case for that transfer of power, we are also publishing the draft legislation that would give effect to it.

“Of course, I anticipate that in the short term we will simply hear a restatement of the UK Government’s opposition. But they should be under no illusion that this will be an end of the matter.

“In this context, the question is often posed to me – what will you do if the Prime Minister says no?

“But the document we are publishing today turns the question on its head.

“It is for the Prime Minister to defend why he believes the UK is not a voluntary union of equal nations. It is for him to set out why he does not believe people in Scotland have the right to self-determination.

“And it is for the Prime Minister to explain why he believes it is acceptable to ignore election after election in Scotland and to over-ride a democratic mandate stronger than the one he claims for his Brexit deal.

“We live in a democracy, and ultimately democracy must and will prevail.”

Responding to Sturgeon’s speech, Scottish Greens co-leader Patrick Harvie said: “The Scottish Parliament has already voted to seek a section 30 order, and if Nicola Sturgeon feels the need to bring another vote to Holyrood, the Scottish Greens will back it again.

“If Boris Johnson ignores that mandate, as he is threatening to do, it will only strengthen the case for Scotland to break ties with a flawed democracy that denies us a say over our future. His reckless Brexit cuts our ties with Europe, rips up workers’ rights and environmental protections and pursues a rightwing race to the bottom in order to get a US trade deal.

“It’s only right that Scotland gets the option to decide a different future during the transition period.”

After launching the document, Sturgeon wrote to Prime Minister Boris Johnson saying he had a duty to consider her request in a “considered and reasonable manner”.

The SNP won a landslide of seats in Scotland following the General Election last week, and since the vote several high profile Scottish Labour figures have come out in favour of a second referendum as a matter of democracy, given the SNP’s mandate.

However, Scottish Labour attracted some criticism from grassroots members after it said it would vote against the Referendums Bill in the Scottish Parliament today.

The party’s constitution and Brexit spokesperson Alex Rowley said in a statement: “To hold a referendum next year would be to engage in a disastrous distraction; our entire energies should be focused on challenging Boris Johnson’s hard Brexit deal and improving the performance of Scotland’s public services, which are suffering badly as a result of nine years of failed Tory austerity and 12 years of SNP mismanagement.”