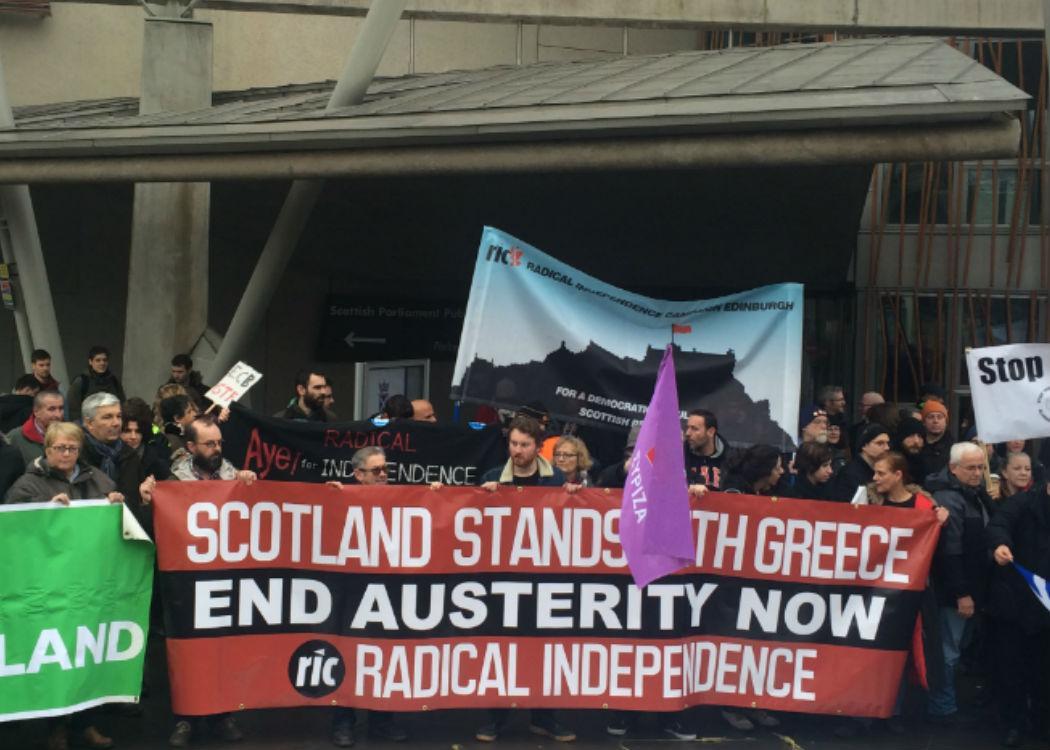 A DEMONSTRATION in support of Greece’s opposition to austerity is set to take place in Glasgow.

The Radical Independence Campaign has called for “everyone who opposes austerity and Troika blackmail” to gather at the Buchanan Street steps from 6pm on Thursday (July 2).

Over the past 24 hours similar demonstrations have taken place across Europe, including in London, Paris, Lisbon and Barcelona.

Greece’s left-wing Syriza has called a referendum on 5 July on whether to accept the Troika of the IMF, ECB and European Commission’s proposed deal for further austerity measures in return for bailout funds.

Prime Minister Alexis Tsipras’s government is urging a ‘No’ vote in the referendum, however it has submitted a last-minute request for a new two-year bailout deal. The Troika has yet to respond.

Greece is due to default on its debts at 11pm on Tuesday (June 30) and a ‘No’ vote in the referendum would increase the likelihood of the country leaving the Eurozone.

Jonathon Shafi, one of the organisers of the protest, said that it was important to organise a rally in Glasgow “because what happens over the next few days will impact everyone in Europe.”

Shafi said: “The Troika and the corporate media are ramping up blackmail and fear so it is down to ordinary people to stand shoulder to shoulder with the people of Greece and that’s what we’ll be doing in Glasgow.

“It is vital that there is a No vote in the referendum in order to keep the international anti austerity movement moving forward,” he continued.

The Scottish Government has so far remained coy on the Greek crisis, only issuing a statement saying that “brinkmanship” being displayed is “counterproductive” (click here to read more).

Shafi said that it is important that Nicola Sturgeon’s administration shows solidarity with Greece in the face of presure from global financial institutions.

“It’s vital that the SNP after winning an election on the basis of anti-austerity politics formally stand with the Greek people and democracy over the austerity of troika.”

Meanwhile another demonstration, called by Syriza Scotland, is set to be held at the offices of the European Commission in Edinburgh on Saturday (click here to read more).