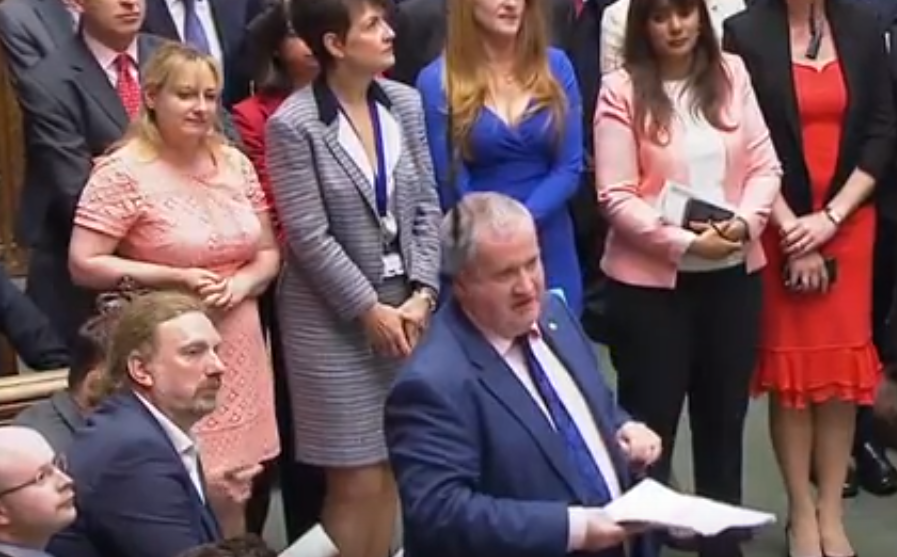 THE SNP’s MPs have walked out on mass at Prime Minister’s Questions in the House of Commons, after the Speaker of the House refused a call by Ian Blackford to have an emergency vote and demanded he leave the chamber.

Blackford, the SNP’s Westminster leader, called for a vote after lambasting the way in which the section of the EU Withdrawal Bill pertaining to devolved powers was rammed through parliament on Tuesday [12 June], with only 15 minutes of debate and no Scottish MPs being called to speak.

The passing of the EU Withdrawal Bill meant powers which were supposed to return to the Scottish Parliament after the UK leaves the EU would go to Westminster for a period of seven years, a move which SNP MPs broke with the Sewel convention that changes to devolution would not occur without the consent of the Scottish Parliament.

In his question to the prime minister Theresa May, Blackford stated: “The prime minister gave a commitment that she would treat Scotland as part of a union of equals, yet last night she pressed ahead with a powergrab in direct opposition to Scotland’s elected parliament.

“Having broken constitutional convention and plunged Scotland into a constitutional crisis, will the prime minister now commit to bringing forward emergency legislation so that the will of the Scottish Parliament can be heard and more importantly respected?”

EXPLAINER: Everything you need to know about the EU Withdrawal Bill

May responded by denying it was a powergrab, saying the Scottish Parliament will get legislation over 80 new areas.

That was the cue for Blackford to call for a vote in the House of Commons.

He stated: “I really do hope that the people of Scotland listened very carefully to what the prime minister said, because the reality of the situation is that powers enshrined under the Scotland Act 1998 are being grabbed back by this parliament today.

“This powergrab occurred when MPs from Scotland were not even given the courtesy of debating it last night, it’s a democratic outrage. The people of Scotland will not be disrespected by this parliament.

“Under the circumstances, and given the disrespect shown, I’ve got no option but to now demand that this house sits in private.”

The speaker of the house John Bercow MP appeared flustered and unprepared for the request, at first responding that it couldn’t be heard, then stating that it could be, and finally deciding that it would only be heard at the end of Prime Minister’s Questions.

Bercow said: “I’m not hearing that at this time and I’m not obliged to do so is my clear understanding…it might be for the convenience of the house for the matter to be addressed at the conclusion of the session…We could have the vote now or it could be taken at the end…If the honourable gentleman wishes a desire to have the vote now so be it…My mixed sequence of advice is that is better for the vote to be conducted at the conclusion of questions to the prime minister…I hope he will trust me that I know of what I speak…there will be a division at the end of this session not now.”

When Blackford refused to accept this, Bercow repeatedly told him to resume his seat, before calling for the party’s Westminster leader to leave.

“Under the power given to me by Standing order no.43 order in light of the repeated refusal to resume his seat on instruction I order the right honourable gentleman to withdraw immediately from the house for the remainder of this days sitting,” the speaker said.

All of the SNP’s 35 MPs then stood up and walked out collectively. Blackford told BBC News afterwards that he was within his democratic rights to call for an immediate vote within the House, and the walk out was in protest against “the complete disrespect”.

“What we saw last night is the government ramming through legislation that takes responsibility of 24 areas back from the Scottish Parliament but remarkably without debate. Not one single Scottish MP was able to speak in that debate,” he added.

Green MP Caroline Lucas said she could “completely sympathise” with the walk out.

Completely sympathise with @theSNP MPs who just walked out. Devolution completely squeezed out of yesterday’s debate.