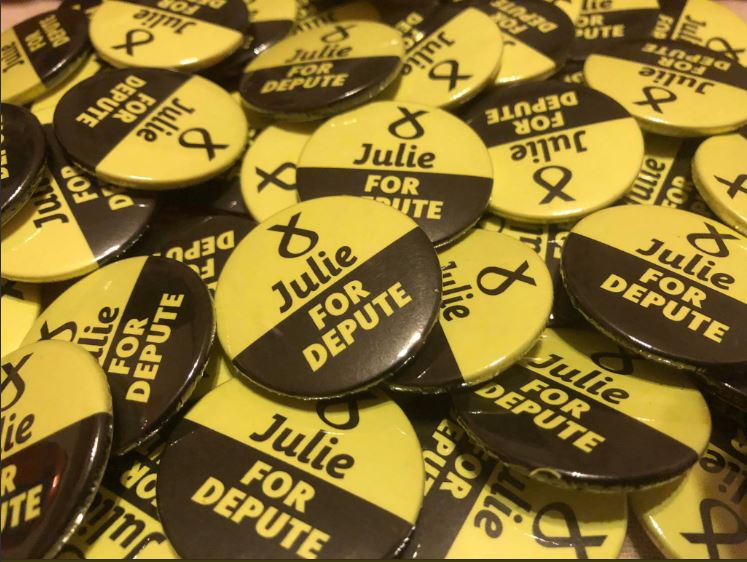 As part of a series of interviews with SNP deputy leadership candidates, CommonSpace speaks to Julie Hepburn

AN SNP deputy leadership candidate has said that the SNP should organise its own campaign for independence as opposed to the unified Yes Scotland approach seen in 2014.

Julie Hepburn, a party activist, told CommonSpace that it could waste campaign time to set up the structures and agreements between the wider movement, a process which was believed to have taken 18-months for the 2014 campaign.

“It is important to recognise that the SNP do not own the concept of independence, but we do have a responsibility to lead us to independence.

“I don’t think it would be possible to replicate the kind of campaign that we saw for Yes in 2014 because the independence movement has outgrown that model. What we would risk is that we spend months talking to ourselves to solve internal questions about branding and messaging.

“My focus would instead be on how we work alongside each other as we each campaign for independence rather than agreeing on lines and positions to take as one. For me, the key is communicating what each part of the diverse independence movement is doing whilst we campaign as the SNP for independence,” Hepburn told CommonSpace.

Hepburn is fighting for the vote of over 100,000 SNP members alongside her opponents in the election, Scottish Government minister Keith Brown and councillor Christopher McEleny.

Although Hepburn is not elected to national political office, the former SNP policy staffer has held senior positions within the party, including a stint serving as political education convener, and has secured backing from high profile SNP figures such as Thewliss and MSP James Dornan, who earlier withdrew his own candidacy.

The party’s strategy for Scottish independence has dominated the deputy leadership campaign, and Hepburn said she viewed the delivery of that strategy as integral to the deputy leaders role, but refused to put a fixed timetable on when a second referendum should be held.

“The next referendum should be at the earliest opportunity, we shouldn’t put a fixed timetable on it so that we can give ourselves the flexibility to go at the right time.

“Ultimately the first minister will take a broad view, including from the deputy leader, about when that time is. So I see my role as actively campaigning for independence now to bring about the opportunity. We will only create that opportunity and raise support if we are campaigning now.

“The difficult part for SNP members is that we have to be prepared to listen to why people voted No last time, or don’t believe in independence. We can’t just make the same arguments, but shout about them louder than we did in 2014.”

Hepburn said her route into SNP membership came through a new years resolution at the turn of the millennium. After a discussion with her mum, she learned about the idea of Scottish independence during a school history project.

“I joined the SNP in 2000 and I was very conscious that I wanted to work out exactly what I believed in before committing to any one party.”

Hepburn told CommonSpace that her desire to see an end to poverty made the SNP the only party she could join, initially becoming aware of politics when she questioned what she saw as successive governments failure to look after the most vulnerable.

“It has always been the SNP, I have never considered joining any other political party. Not just because of independence but because of how in tune my values are to the party’s,” she said.

“For me, independence is just something we have to do to get on with the things I want to achieve, more like a necessary piece of bureaucracy than an end goal. The SNP is the most viable route to independence, and that’s why I am so committed to the party.”

Hepburn told CommonSpace that she felt a future independence referendum would be fought with a greater sense of urgency: “Independence now represents more continuity for the things people care about because of the route the UK has taken since 2014.

“The UK Government has shown they now want to erode devolution, so voting No is no longer about choosing devolution or the status quo, it is actually about defending the things people care about.”

Announcing the final report of the SNP Growth Commission, set up to examine the future of an independent Scotland’s economy, Nicola Sturgeon said that her new deputy would be responsible for chairing the National Assemblies which the SNP will organise over summer 2018 for party members to debate the contents of the report.

Hepburn said that this responsibility if elected, meant she wanted to maintain impartiality about the detail of the report to allow members the opportunity to form their own conclusions.

Connection to the grassroots membership of the party has been a consistent theme through Hepburn’s bid for deputy, and she told CommonSpace that this would form a key part of her style of leadership as Sturgeon’s deputy.

A longtime member of the SNP’s ruling national executive committee [NEC], which is attended by senior party figures including the first minister, Julie Hepburn said that she had a strong track record of making sure the views of ordinary party activists were heard at the top of the party.

“Recently I took a policy on a citizens income to the NEC, and now we are seeing that being trialled in some parts of Scotland.

“At the SNP conference in June, we will have a big discussion about the SNP’s structure and as part of that I want to make sure that the party members can influence public policy as well as party policy,” she said.

Asked about the SNP’s response if the UK Government rejected a request for a second referendum, Hepburn told CommonSpace that the position would likely become untenable for Theresa May: “At that point, even No supporters who believe in democracy would probably feel they have to defend Scotland’s right to a referendum.

”In the era of fake news, what is now happening is ours opponents are coming in and trying to undermine the result of a referendum before it has even happened, and that is what we have to defend against.

“The movement has to be bold and uncompromising that we are entitled to hold the referendum and if successful, to become independent.”

The winner of the contest is set to be announced on 8 June at the SNP’s party conference in Aberdeen.