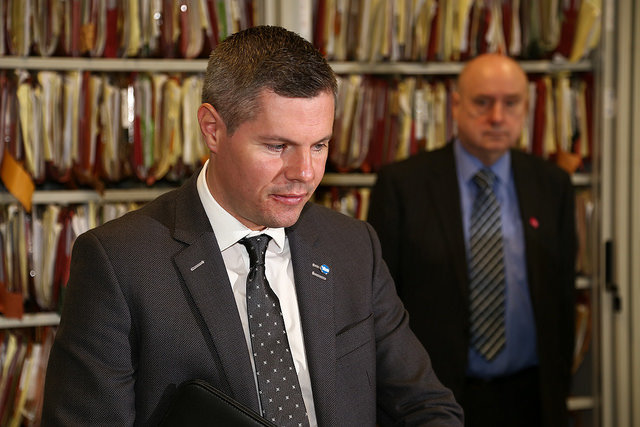 THE SCOTTISH GOVERNMENT has reached a deal with the Scottish Green Party that will allow them to pass their draft budget.

Speaking before parliament at the outset of a Stage One debate, finance secretary Derek Mackay announced that the revised Scottish budget for 2018-19 will include £170m more for local council services and fair wages, after the Scottish Greens previously indicated that they would only support the budget if £157m was given to councils.

Mackay also announced that a loophole – an “anomaly,” as Mackay described it – which would have given those earning between £43,525 and £58,500 – will be closed, while all those earning less than the average wage will pay either no or less income. This follows a Scotland-wide poll which showed that 75 per cent of the public opposed the loophole, and 38 Degrees campaign in which 30,000 Scots called for a tax system that raises at least £200m more for public services.

“As a result of our actions, we’re able to deliver on all of our commitments and invest an additional £400m in Scotland’s National Health Service.” Finance Secretary Derek Mackay

Addressing parliament, Derek Mackay said: “Reaching consensus is indeed a task for us all, and I thank those members that have engaged properly and constructively.

“Scottish tax payers, in this progressive system of taxation – yes, there is divergence from the UK – it will protect our public services that are free at the point of use, including free prescriptions.

“And perhaps most importantly, as a result of our actions, we’re able to deliver on all of our commitments and invest an additional £400m in Scotland’s National Health Service.”

Mackay reiterated that the Scottish Government did not have full control of the economic levers necessary to fully reverse real-terms cuts made to the Scottish block grant by the UK Government. He then called upon the UK Government and the Welsh Assembly to follow Scotland’s lead in creating what he described as the fairest tax system in the UK.

“This deal is just the latest example of Greens leading the change in Scottish politics, from shifting the SNP and Labour’s positions on income tax toward a fairer structure.” Scottish Greens co-convener Patrick Harvie

Commenting on the budget deal, Scottish Greens co-convener Patrick Harvie said: “Greens stand firmly with local communities and public sector workers affected by years of cuts and closures. Last year we stopped the cuts; this year we’ve pushed the government even further, and delivered a real-terms increase in funding, including a fair contribution towards the additional pressures councils are facing.

“This deal is just the latest example of Greens leading the change in Scottish politics, from shifting the SNP and Labour’s positions on income tax toward a fairer structure, securing a ban on fracking, getting Air Departure Tax cuts removed from the budget, and delivering changes in social security to stop sanctions and ensure low-income families get the support they are entitled to.

“While other parties continue to posture from the sidelines, Greens are making Scotland fairer. Today’s agreement is the latest step in a journey on restoring financial powers at local level, on which we will need to see far more progress before next year’s budget, as the annual fight against council cuts must not continue.”

Commenting on the budget deal, Scottish Trade Union Congress (STUC) General Secretary Grahame Smith welcomed certain aspects, but warned that many local public services are still in crisis, and described the Scottish Government’s tax proposals as a “missed opportunity”. Smith said: “Consistent pressure from workers through their unions has had a substantial impact on this budget deal. While the eventual compromise falls significantly short of what is needed, the STUC recognises that the Scottish Greens took key trade union priorities into their negotiations with the SNP, including the demand to fund local government to lift the pay cap.

“This budget should be the start, not the end, of a plan to fund the lifeline services that our communities rely upon.” STUC General Secretary Grahame Smith

“Fewer public workers are now facing a real terms pay cut this year. But unions’ pay claims remain well above the 3 per cent figure, as workers seek to repair the impact of year on year pay cuts. This is only the beginning of a concerted campaign on pay and public service investment.

“Our pressure has also seen a marginal increase in the use of tax to redistribute wealth and invest in public services.  However, we view these tax proposals as a missed opportunity to fund the radical change that Scotland needs.

“The use of underspend to marginally improve the situation in local government is welcome, but many local public services remain in crisis.  This budget should be the start, not the end, of a plan to fund the lifeline services that our communities rely upon.”

The announcement by Mackay that £5.5m of additional funding would be provided for Orkney’s inter-land ferry service as part of a wider deal with Northern Isles council leaders was welcomed by Orkney Island Council leader James Stockan, who said: “This is a red letter day for the council. In 15 years as a councillor, I would rate this as the most significant financial breakthrough we’ve seen for the council. It will provide vital support for our lifeline ferry service and for the organisation as a whole.”

Responding to news of additional funding for four Marine Protected Areas, Dr Sam Gardner, acting director at WWF Scotland also commented: “This is an important announcement for some of Scotland’s most special and majestic wild animals, putting us on the path to creating the world’s first protected areas for basking sharks, minke whales and Risso’s dolphin. Full credit to Mark Ruskell MSP for having championed this issue and pressed the Scottish Government to move forward.”