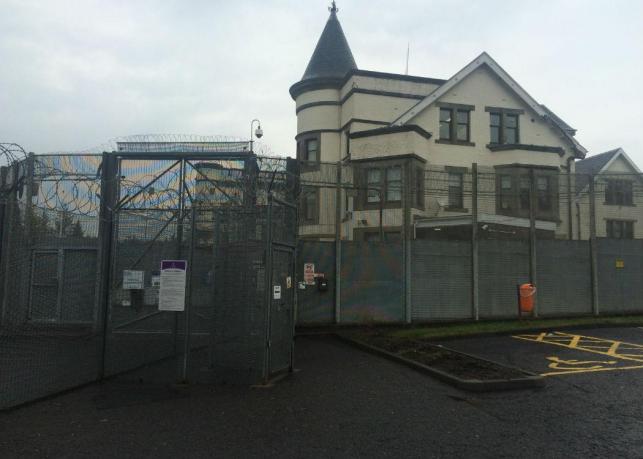 MIGRANT RIGHTS campaigners have welcomed a vote by SNP members to urge the UK Government to stop detaining children and pregnant women at Dungavel Immigration Removal Centre, while calling for further action.

The resolution, proposed by Linda Fabiani MSP along with MSPs Sandra White and Ruth Macguire, was passed unanimously by members at the SNP’s autumn conference in Aberdeen this Tuesday (15 October).

The resolution expressed concern that a Freedom of Information request had revealed that, between 2010-18, at least 21 under-18s and six pregnant women were held in the South Lanarkshire facility, “almost a decade after the practice was banned”.

The resolution continued: “Conference notes the UK is the only country in the EU which has no cap on the length of time somebody can be detained under immigration powers. Conference believes that innocent families, women and children shouldn’t be held like this for months on end.

“As such, conference calls on the UK Government to urgently stop detaining children and pregnant women at Dungavel – a facility entirely unsuitable for people in such a vulnerable position.”

Commenting following the vote, Scottish Refugee Council media officer Chris Afuakwah told CommonSpace that the detention system as a whole should be scrapped.

Afuakwah said: “Detention should not have to exist at all. It was designed as a last resort, but is increasingly being used as a holding facility.

“The UK has one of the largest detention estates in Europe, and is the only European country with indefinite detention, which needs to end. It’s time for a time limit.

“And we need practical, community-based alternatives which ultimately remove the need for detention at all.”

“The UK has one of the largest detention estates in Europe, and is the only European country with indefinite detention, which needs to end.” Scottish Refugee Council media officer Chris Afuakwah

This reflects the aims of an amendment to the SNP resolution which was voted down substantially at conference.

Proposed by SNP Glasgow Provan branch, the amendment would have replaced the call to stop detaining children and pregnant women by instead urging the UK Government “to dismantle the immigration detention system in its entirety”.

Former SNP MSP and MP Anne McLaughlin, who will stand for the party in Glasgow North East in the next General Election, spoke for the amendment on behalf of the branch.

While Linda Fabiani MSP expressed support for the “spirit” of the amendment, she said she was concerned that it could remove the resolution’s ability to hold the UK Government to account for specifically failing to address the continued detention of women and children.

Fabiani added that the amendment may go “too far” because “there may be some baddies” being held in the detention system.

McLaughlin argued that “if someone has committed a crime, they should go through the justice system”. She said that “more humane solutions [than immigration detention] work” and that she could point to a dozen such examples around the world.

The Unity Centre, which provides support to people affected by what it describes as “the UK Government’s racist and oppressive system of immigration controls”, welcomed the move by the SNP to call attention to the issue and added that “more action can still be [taken] in tackling the separation of families”.

Speaking to CommonSpace, a spokesperson said: “We would welcome any efforts to stop the transfer of people who are detained in Scotland being transferred to other detention centres.

“Often when one of the parents is detained, they are moved from one detention centre to another one within the UK. This makes it very difficult for the families to visit and keep in touch.

“When a family or individual is moved, the are forced to get new solicitors due to the legislation on jurisdiction. This process can be very difficult especially when the Home Office keeps moving the person from one centre to another.

“We find that the Home Office uses this tactic to their advantage in removing people.”

READ MORE: Behind the Wire: Inside Dungavel – an exclusive short film

The Unity Centre said it would like to see “more support from MPs in holding the Home Office to account” and said that many Home Office caseworkers “do not understand the impact of their decision to detain families”.

The spokesperson said: “As a centre, we see a lot of families that are left stranded and in distress when one of them is detained. Parents find it difficult to explain to their children that daddy or mummy is not coming home tonight.”

Unity also called for home raids to be stopped, adding: “Raids happen in the middle of the night or early morning  and in the presence of young children. Children should not have to witness this.”

It is SNP policy to push the UK Government to limit immigration detention to 28 days and to oppose the detention of children, pregnant women and people with mental illnesses, while also calling for the government to “pursue alternatives to detention”.

At the Labour Party conference in September, members voted unanimously for a policy motion calling for the closure of all detention centres in the UK.

Responding to concerns about the ongoing detention of children earlier this year, a Home Office spokesperson said: “We ended the routine detention of children for immigration purposes in 2010, and fundamentally changed the system to ensure that the welfare of the child is at the heart of every decision we make.

“However, we will not operate a system open to abuse and must avoid a situation where legitimate immigration control can be undermined by someone simply claiming to be a child.”