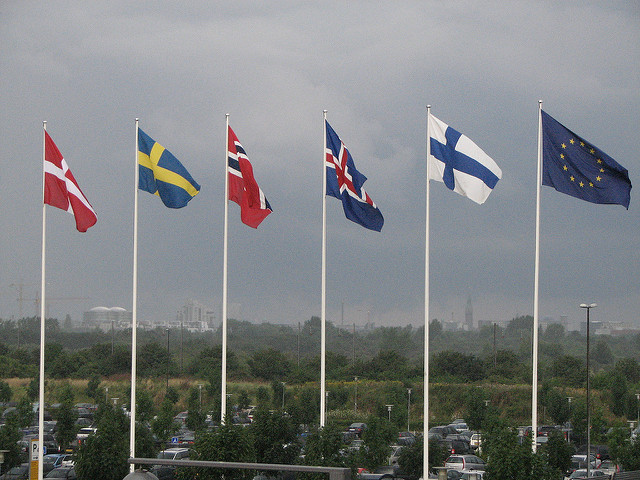 ACADEMIC AND ACTIVIST GEORGE LAKEY has been working to change the world since the late 1950s.

A veteran of the US civil rights and anti-war movements, Lakey was a co-founder of the Quaker Action Group and the Movement for a New Society, a network of autonomous activist groups practicing “nonviolent revolutionary strategy” and instrumental in community organising, feminist and LGBT advocacy, anti-interventionism and community organising from the 1970s onwards.

Lakey’s latest book, Viking Economics: How the Scandinavians Got It Right and How We Can, Too – described by its publisher as “perhaps the most fun economics book you’ll ever read” – examines the history and principles behind the Nordic model of social democracy and argues against the popular perception that the Nordic system is impossible to replicate internationally.

“What they [the people of the Nordic countries] found first that was useful was to create a vision of the kind of society they wanted to have.” George Lakey

While liberals and leftwingers worldwide often talk with familiarity and fondness about Scandinavian welfare in comparison with more explicitly neoliberal regimes, some are perhaps less familiar with the history that made it possible.

“What they [the people of the Nordic countries] found first that was useful was to create a vision of the kind of society they wanted to have,” Lakey explains.

“Particularly, the kind of economy they wanted to have, because they didn’t think the economy was performing well for the people. In fact, it was performing so poorly for the people that a lot of Nordic people were leaving Sweden, Norway and Denmark and migrating to the US, Canada, Australia and so on, which was very hard on the families.

“So, the people remaining decided ‘We need to change our country, not just lose our relatives. In order to do that, we need to have a picture of what it is we want, so we can mobilise the movement to fight for that.’ So that was the first step.”

Lakey also emphasises that, unlike revolutionary movements elsewhere in the early 20th century, there  was an emphasis from the outset on the incrementalism of significant reform.

“Another important thing they did was to break off pieces of what they wanted and try to implement it in the here and now,” Lakey says. “We’re talking about 1900, 1910, 1920. And so, a vast cooperative movement developed in Sweden, Norway, Denmark and Iceland.

“They were able to develop a kind of self-confidence that comes from family farmers and working people having a sense of: ‘Well, we’ve created this cooperative together, and it’s working much better than the previous model was, so maybe we do have the right to demand a better economic model.’

Despite this comparative restraint in pursuing transformative social and economy policy, Lakey points out the synergy of complimentary struggles pursued in the Nordic nations during that developmental period.

“These campaigns were joined by other people who felt they had a stake, and also middle class students – the children of the professional classes – who were also unhappy with the economic model, and joined forces with what looked like was becoming a majority movement of the less well-off.

“So, those campaigns developed more and more strength, to the point where in Sweden, in 1931, there was a crisis: the troops had been called out to put down the strike, they shot into the ranks of unarmed demonstrators, and the whole country went up in general strike, and brought down the government.

“And that enabled the Social Democrats, who were the main party representing the majority, to move into power and run the country for 40 years straight, pretty much, and implement this model they had developed a vision for.

“Each country has its own particularities about how the struggle went, but that’s the general picture of combining vision with co-ops and other ways of working together and developing solidarity, and the non-violent direct action campaigns.”

“Each nation has the potential, but has also its own challenges.” George Lakey

Regarding the potential ease or difficulty with which other nation-states might replicate the achievements of Nordic social democracy, Lakey acknowledges: “Each nation has the potential, but has also its own challenges. By and large, the Nordics were homogeneous ethnically, and largely the same religion – Norway was 97 per cent Lutheran, for example. Ethnic and religious strife is often used by the economic elite to stay in power, to divide and rule.

“On the other hand, the downside of the homogeneity, their cultural homogeny, was that they didn’t have as much creative spark – the kind of innovation that comes from having people from different perspectives working together.

“So other countries that want to make major changes, if they’re able to get enough cooperation between different racial and religious groups, have a better chance of sparking the innovative potential that will make their model better and their struggle more fierce.

“For example, in the United States, white people have learned so much from the civil rights movement of the 1960s, and can continue to learn as black people in the US struggle through Black Lives Matter.”

When the Nordic model is discussed in a Scottish context, much discussion is spent on both oil economics and contemporary welfare policies, while relatively little attention is paid to the history detailed in Lakey’s book. Lakey agrees strongly that such an imbalance has warped the discourse around Nordic social democracy.

“For one thing, it’s only Norway that’s a major exporter of oil,” Lakey says. “Sweden has zero oil, Iceland has zero, Denmark’s got a little bit. And all four of those share the same economic model and pretty much get all the same benefits of the model, it’s just that Norway, well, Norway gets dessert at the end of the meal,” Lakey laughs.

“My book is the only book I know of that tells about how people turned their countries around,” Lakey continues, “from countries with miserably high degrees of poverty, to become the top of the ladder in economic wellbeing.

“That’s widely known, but what isn’t widely known is how they went about changing their situation, which required pushing their economic elite out of dominance to create an alternative model. The lesson of the most successful social movements is developing a vision of what you want.”

Viking Economics: How the Scandinavians Got it Right – And How We Can, Too by George Lakey is available now from Melville House Publishing