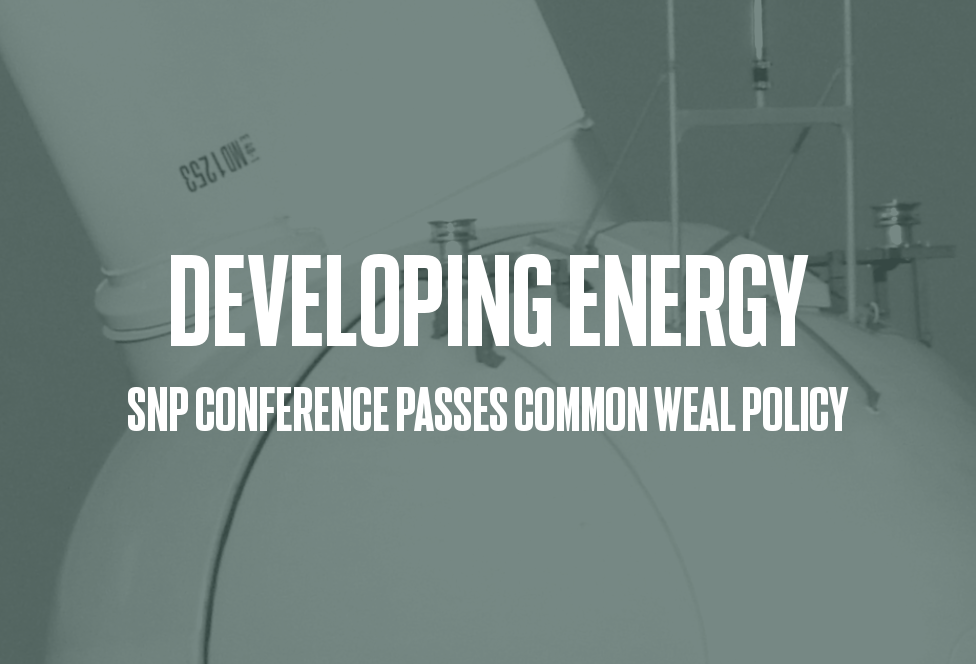 Today at the SNP Conference, delegates voted overwhelmingly in favour of setting up a Scottish Energy Development Agency and thereby have adopted as their own one of Common Weal’s key policies in the campaign to decarbonise Scotland’s energy networks and to create a Green New Deal in Scotland.

Common Weal wishes to thank all of the delegates who voted for the motion and to everyone involved in front of and behind the scenes who have helped bring the campaign to this successful milestone. Thanks go especially to Keith Baker, Ron Mould, Gordon Morgan and Iain Wright who co-authored our paper on the SEDA. All authors are absolutely delighted with this news.

The Scottish Energy Development Agency will serve as a strategic body for identifying areas of need in Scotland – be this areas of absolute poverty or areas where the current energy network can be upgraded and decarbonised in line with Scotland’s Green New Deal ambitions.

“On behalf of Common Weal’s Energy Working Group I’m absolutely delighted that members voted overwhelmingly in favour of our motion to establish a Scottish Energy Development Agency, which we now hope will become an important part of Scotland’s efforts to ramp up the development of renewable heat, tackle fuel poverty, and transition to a fossil fuel-free future. We’d like to thank all the members who supported it, but particularly those who worked so hard to draft and promote the motion – Ronnie Cowan MP, Stuart McMillan MSP, Chris Hanlon of the Trade Union Group, Agnes McAuley, and all at the Greenock and Inverclyde and Garnock Valley branches. Now the hard work to take the SEDA from paper to practice begins, and we look forward to working with MSPs and the Scottish Government to make it happen.”

Scotland needs to move away from measuring itself in terms of GDP and towards measuring itself in terms of sufficiency and wellbeing. The SEDA can be an important tool in this transition by identifying areas where an energy project may offer poor commercial returns but would deliver co-benefits to the economy, society and the environment. Some projects, like hydrogen and wave power, may not measure well in terms of immediate and direct economic benefit but may act as a catalyst and test bed for future commercial projects.

The Scottish Government has already taken initiatives to promote energy efficiency, charging of electric vehicles, community energy schemes and the prevention of fuel poverty however the pace of these schemes is uneven across the country. The local authorities charged with delivering the national goals are often under-resourced especially in terms of availability of experts skills. A national level SEDA will be able to co-ordinate and direct those resources to where they are needed whilst also acting as a medium through which skills, techniques and successful experiments can be shared to others.

Common Weal now has a track record of developing policies around the creation of national companies and public bodies designed to fill gaps in Scotland’s current provision and to expand capacity for things that we cannot do just now. Policies such as the Scottish National Investment Bank (SNIB), Scottish National Infrastructure Company (SNIC). A National Energy Company (NEC), and the Scottish Statistics Agency (SSA) have all been passed overwhelmingly or unanimously at previous SNP conferences. Each one of these bodies – plus the SEDA – will perform vital roles in Scottish development but the real power of them comes when they are all established and working together.

The SSA can gather data on heat decarbonisation and fuel poverty, SEDA will use those statistics to identify areas of energy need and develop a plan for eliminating it. The SNIB will then develop a financial solution to pay for the project in a long term, patient and sustainably affordable way. From there the SNIC will be employed by the NEC to deliver the project through local private contractors (with the final energy infrastructure being owned by the NEC).

It may be possible to deliver vital energy projects without one or more of these bodies but each one missing from the whole will cumulatively impact the effectiveness. Without SNIB, the Scottish Government may need to use expensive and risky schemes like PFI, NPD or the newly announced MIM program to fund the projects. Without the NEC, the Scottish Government would be continuing to subsidise the private market instead of developing its own assets. Without SEDA, we will not be able to effectively co-ordinate national strategy across multiple local authorities and any projects which result will be more of the same small scale and piecemeal operations that take place at present. Scotland cannot effectively decarbonise its economy and eliminate fuel poverty by doing the same things as it has been doing up till now.

But with all of these bodies now in place or in the planning stages, Scotland can look forward to a Green New Deal that puts All of Us First.