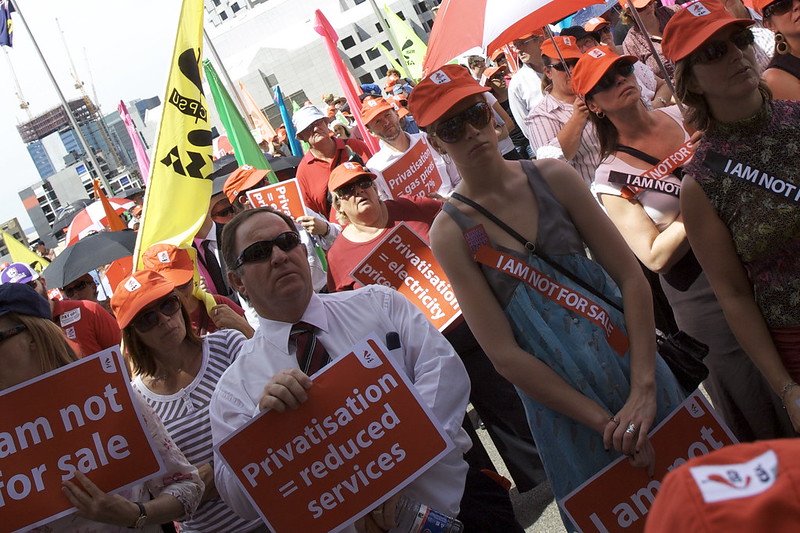 THE NEW BOOK Public Alternative to the Privatisation of Life sets out the scale, cost and impact of different forms of privatisation and encompasses public goods and services including the welfare state, the public realm or built environment (and right of assembly), public domain or creative commons, public sphere (collective debate and elimination of economic and social inequality) in which nature and biodiversity, climate and the environment are an integral part.

A political economy framework assesses the impact of privatisation that combines the concepts of accumulation by dispossession and the primary and secondary circuit of capital. It demonstrates how privatisation is interwoven with, and is co-dependent upon, financialisation, marketisation and individualisation.

Four decades of neoliberal ideology and a decade of austerity have had a major influence in extending privatisation beyond the sale of state-owned corporations and outsourcing of support services to encompass core services, multi-service public private partnership contracts and ‘choice’ mechanisms for patients and pupils in industrialised countries and the global south.

“The UK developed and exported privatisation on an industrial scale since 1981 – 50 state-owned industries and corporations were sold with net proceeds of £74.9bn (£165.5bn at 2018 prices).”

Neoliberal public management focuses on outcomes but has marginalised inputs, processes and outputs, which are critical determinants of service quality, to try to conceal the full negative consequences of privatization. For example, the downward spiral in the quality of jobs, terms and conditions and pension rights is considered a contractor responsibility and of limited, if any, concern for public clients awarding contracts.

The book details the impact of privatisation in education, health and social care, transport, criminal justice and other services the UK and other countries over three decades, which evidences the consistency of failure and impact of market forces on services, jobs and increased inequality. Offshoring and tax avoidance is rife, particularly as private equity fund ownership of public assets and the growth of secondary market transactions of PPP equity to infrastructure funds accelerates.

The final part of the book analyses why it is vital to challenge new forms of privatisation and public-private partnerships promoted by global institutions and transnational corporations which will continue to embed new ways of extracting profit and control. The potential impact of technological change and automation and the continuing urbanisation and growth of megacities must also be taken into account.

READ MORE: Analysis: With steel on the brink, 5 ways privatisation has degraded the British economy

I argue for the centrality of public ownership with scope for community and cooperative provision and why they must not mirror the policies and practices of social enterprises, housing associations and many other third sector organisations in capitalist economies.

The development of alternative policies and plans are important because public ownership and re-municipalisation alone are inadequate. The systematic decommodification of services is necessary to strip away the neoliberal commissioning and contract culture to be replaced by new accountable governance, transparency and service user and public employee participation and radical public management. Green New Deals should be part of wider national, regional and local economic, social and environmental plans to ensure a holistic approach that integrates sector strategic plans for public housing, employment, education, health and social care with the preservation of nature and biodiversity and climate action.

A radical public management is urgently needed to break the hold of neoliberal ideology and managerialism. Ownership alone is no guarantee that a service will be provided effectively to meet public needs and is more likely to be re-privatised. Therefore, all sustainable proposals for public ownership must be accompanied by a detailed plan for how services will be provided, managed and monitored.

Increased sustainable public revenue can be obtained through progressive taxation with increased wealth and corporate taxes whilst eliminating the cost of corporate welfare subsidies and tax breaks. Corporate interests must be challenged by building new alliances between trade unions, community and civil society organisations taking joint action to advance a radical agenda.

A book launch for ‘Public Alternative to the Privatisation of Life’ chaired by Common Weal director Robin McAlpine will be held on 28 January 2020, 3.30pm – 5.00pm at the Augustine United Church, 41 George IV Bridge, Edinburgh. Attendance is free, but those interested at encouraged to book via Eventbrite.