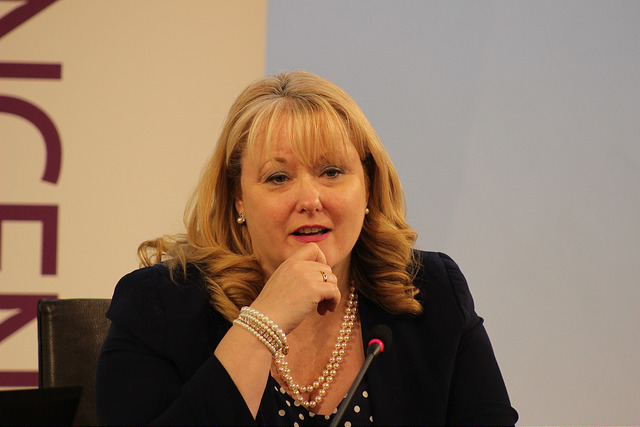 A SCOTTISH DISABILITY charity and Scottish politicians have backed a UN Committee report condemning the UK Government’s cuts to benefits for disabled people.

Politicians at the Scottish Parliament have signed up to SNP MSP Christina McKelvie’s (pictured) motion to debate the report from the United Nations Committee on the Rights of Persons with Disabilities (UN CRPD), which criticised the Conservative government’s austerity programme, including cuts to welfare benefits.

The reports stated that as a result of the draconian cuts to housing benefits, the Independent Living Fund and social services, disabled people were feeling “high levels of stress, anxiety and depression as a consequence of the shortfalls in their budget”.

The report went on to say that, based on these cuts to benefits, there is “reliable evidence that the threshold of grave or systematic violations of the rights of persons with disabilities has been met”.

Christina McKelvie said: “The findings of this report are what I and many of my parliamentary colleagues already knew – Conservative austerity welfare cuts are attacking the poorest and most vulnerable in our society.

“The Conservative government should be rightly condemned for the ‘conscious cruelty’ of their welfare cuts. As the report signifies, there is reliable evidence that the human rights of disabled persons’ have been breached as a result of austerity.

“Moreover, that the very same austerity has disproportionately and adversely affected the rights of disabled people over every other claimant.”

With the United Nations Day of Persons with Disabilities being marked across the world on Saturday, the Hamilton, Larkhall and Stonehouse MSP expressed her support for disabled people by launching the ‘UN Report on the Impact of Welfare Cuts on Disabled People’ members debate motion at the Scottish Parliament.

“The very same austerity has disproportionately and adversely affected the rights of disabled people over every other claimant.” Christina McKelvie

According to McKelvie, it shows “the strength of feeling on all sides of the chamber” and will hold the “UK Government to account for their compliance in the systematic failures of their austerity programme”.

Scottish disability charity Inclusion Scotland hopes that politicians will use the members debate “to condemn the UK Government’s actions and their lack of an adequate response to the UN CRPD Committee’s report”.

“This included evidence that because of the Bedroom Tax and the mandatory reconsideration and sanctions regimes many disabled people had been left without sufficient money to feed themselves, others had become destitute and homeless and some had died from hunger, hypothermia and suicide.

“Thus the most fundamental human right, the right to life, was breached. All of this happened even though the UK Government’s own Equality Impact Assessments of benefit cuts foresaw adverse and disproportionate impacts on disabled people.”