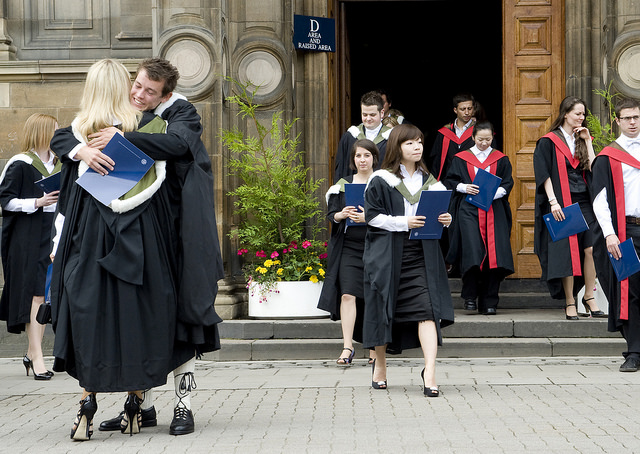 MORE MUST BE DONE to remove the barriers to attending university facing the 20 per cent of Scotland’s population who are disabled, according to disability rights organisation One in Five.

The campaign group has written to 14 Scottish universities, as well as Universities Scotland, seeking clarification on the institutions’ commitment to widening access for disabled people, requesting that disability is considered an indicator in the contextual admissions process.

One in Five’s letter states: “In 2015-16, only 11.5 per cent of full-time university students, undertaking their first degree, declared a disability. As disabled people make up 20 per cent of Scotland’s population, we believe the disability admissions gap illustrates that more must be done to remove the barriers disabled people face accessing Higher Education.”

“University gave me the best chance in life I could have, I want that for more disabled people.” One in Five co-founder Pam Duncan-Glancy

The letter continues: “The Equality and Human Rights Commission (EHRC) stated that disabled pupils have lower attainment rates than their non-disabled peers. It is our view that considering disability as a contextual indicator for admissions will help identify an applicant’s potential to succeed in Higher Education during the admissions process.”

In its call for the admissions process for disabled people in Scotland to be reformed, One in Five has received support from NUS Scotland, and has previously gained similar backing from the Scottish Parliament’s equalities and human rights committee.

Commenting on One in Five’s latest initiative, the group’s co-founder Jamie Szymkowiak said: “One in Five recognises that work regarding contextual admissions is on-going.

“Nonetheless, as the evidence from the Equality and Human Rights Commissions suggests, important that we do not confuse legal obligations under the Equality Act with the aims of widening access to disabled applicants who face multiple barriers accessing Higher Education.”

“Universities are rightly, and increasingly, making use of contextualised admissions when considering under-represented groups. We need to see this work built on.” NUS Scotland Disabled Students’ Officer Lainey McKinley

Fellow One in Five co-founder Pam Duncan-Glancy also commented: “Disabled people are too often left behind, in work and in education. University gave me the best chance in life I could have, I want that for more disabled people.

“The gap between admission rates of disabled and non disabled people shows we have a way to go. By default, we are losing out, we need to fix that by design. Using disability as a contextual criteria on admissions is a way to do this and I hope all universities will consider it.”

Explaining NUS Scotland’s support for the One in Five position, disabled students’ officer Lainey McKinley said: “We know that institutions have duties to make reasonable adjustments for disabled students once they’re in the door, but that isn’t the full story.

“Universities are rightly, and increasingly, making use of contextualised admissions when considering under-represented groups. We need to see this work built on – and we support any measures by Scotland’s universities to better recognise the barriers that disabled applicants face.”

At present, only four Scottish universities are believed to consider disability as a factor in their contextualised admissions process.

Speaking to Third Force News, a spokesperson for Universities Scotland responded to the One in Five letter, saying: “As disability covers a very wide and complex range of physical and mental conditions, it’s very important to work with the individual applicant to understand their circumstances and what support they need, from admissions onwards.

“Scotland’s universities use contextual admissions, including adjusting grades, to widen access for those from deprived backgrounds because there is a very strong and causal link between deprivation and educational attainment. Socio-economic disadvantage is not covered under the equality act, so we are working in different ways to address that.”

Picture courtesy of This is Edinburgh