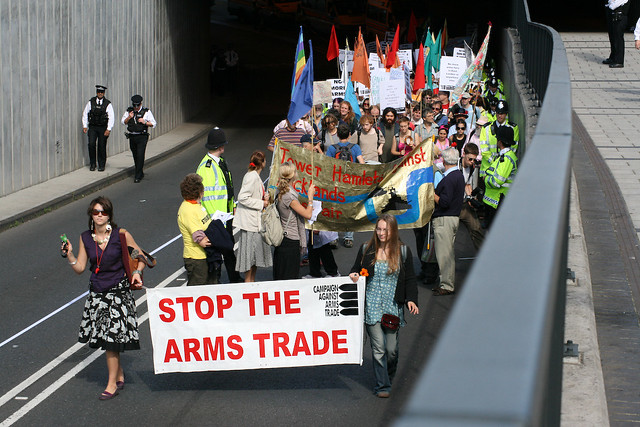 LIZ TRUSS, the UK’s Secretary of State for International Trade, has faced condemnation ahead of her speech at London’s bi-annual DSEI arms fair, which campaigners claim will be used to promote arms sales to Saudi Arabia.

The Campaign Against the Arms Trade in Scotland (CAATS) has promised that the arms fair will face protests over its involvement with the Saudi government, which is expected to be represented at the event.

Last week, Truss received a 288-page report from the international law group the Global Legal Action Network (GLAN) and the UK-based law firm Bindmans, described as the “most comprehensive” independent analysis of the bombing campaign conducted by the Saudi-led coalition in Yemen, and alleging a Saudi cover up of illegal airstrikes on civilian targets.

According to the report – which draws from witness testimony, crater and bomb-fragment analysis, and evidence compiled by the Yemeni human rights group Mwatana – Saudi attacks violated international humanitarian law by “targeting civilians and civilian infrastructure”, contradicting the claims of the Saudi coalition in their own investigations.

“While the Scottish Government is against arms sales to Saudi Arabia, this is still happening in our name as part of the UK. We need to hear strong condemnation from politicians in Scotland.” CAATS spokesperson

It was also revealed last week that a United Nations panel of experts had discovered fragments of British-made laser guidance missile systems at the site of an 2016 air raid in Yemen, which took place a month after then-Foreign Secretary Boris Johnson endorsed the exportation of UK weapons to Saudi Arabia in the expectation they be used in the Yemen conflict.

Earlier this year, UK courts ruled that British arms contracts with Saudi Arabia were illegal, and condemned the UK Government for not sufficiently assessing the potential risk to civilians that the weapons sold could pose.

Despite this, Truss is scheduled to be one of the keynote speakers on the opening day of the government-backed DSEI arms fair, giving her speech during a series of themed workshops on increasing military and defence trade with Saudi Arabia. Although the details of her speech at at present unknown, the secretary’s appearance will follow a seminar on “opportunities for business” in the Gulf Cooperation Council Area, led by AEI Saudi.

The workshop scheduled by AEI Saudi directly after Truss’s address will be discuss increasing business in the Gulf, with the event preview stating that “defence expenditure across the GCC is expected to hit $100bn this year, with the majority of spending coming from the Kingdom of Saudi Arabia”.

The DSEI arms fair typically attracts over 35,000 international delegates, and is considered one of the arms industry’s biggest global events. This year’s invite list includes the Hong Kong authorities, and the governments of Egypt, Israel, Bahrain, Colombia and Turkey, all of which have been accused of human rights violations.

The fair will also include a workshop on increasing defence business with India, despite ongoing concerns over mass detentions and human rights violations in Kashmir by the Indian Government.

In addition to Truss, Defence Secretary Ben Wallace and Minister for Defence Procurement Anne-Marie Trevelyan will join an unnamed cabinet minister in other keynote speaker slots.

A spokesperson for CAATS said: “That the UK Government thinks it is acceptable to ignore vast amounts of evidence and plough ahead promoting arms sales to a human rights abusing regime like Saudi Arabia is disgusting. That’s why dozens of Scots will be travelling to London to protest the grotesque DSEI arms fair.”

“While the Scottish Government is against arms sales to Saudi Arabia, this is still happening in our name as part of the UK. We need to hear strong condemnation from politicians in Scotland, and a guarantee that we as a nation are moving away from this death trade, and not simply posturing for political gain.”

However, the Scottish Government faced criticism earlier this year, after it was revealed by the investigative journalism platform the Ferret that arms firms which have sold weapons used in the war in Yemen have received nearly £3 million in taxpayers’ money through Scottish Enterprise grants.

In 2017, over 100 people were arrested at the site where the DSEI arms trade exhibition was taking place. Protests are expected in the week of the DSEI set-up from 2 September. This year’s fair runs from 10-18 September at the Excel Centre in London’s docklands.

CommonSpace contacted the office of Liz Truss, the UK Cabinet Office and the Department for International Trade for comment, but received no response at the time of publication.