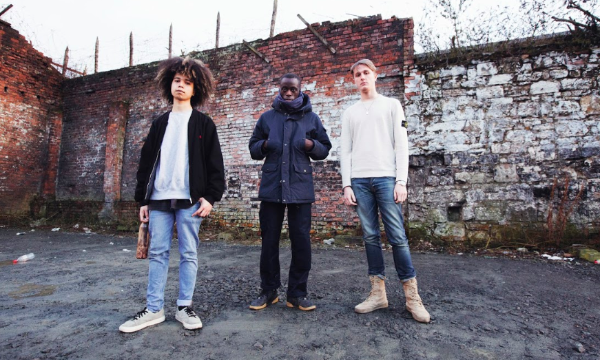 GLASGOW CREATIVES seeking to develop a ‘conscious clubbing’ scene through inclusive music and arts events have been showcased in a film by ticketing platform Eventbrite.

Kacie McAdam, aged 25, runs Peach, a rap, trap and grime club night which encourages women to come out and dance in a male dominated environment.

Forij Collective (pictured above), led by Mobolaji Agoro, André Serraino and Angus Mclachlan – all aged 25 and under – throw parties in the city’s empty spaces and releases albums by Glasgow musicians, seeking to provide platforms for independent artists.

“We still struggle with a lot of issues when it comes to inclusivity due to there not being enough spaces, occasions, events, where people can interact and share,” Forij Collective said. “Groups are consciously disrupting the status-quo and in so doing do a community around them a service by not only pushing the envelope but also giving people a platform to be visible.”

Where People Sleep is an arts collective by Amy DG, Samantha Dick, and Shaheeda Sinckler, who hold art exhibitions in their flat, exploring themes such as identity and the male gaze.

And VAJ Power, made up of Sofya Staune and Holly McGowan – both 24 – explores how animation, visuals and lights can transform clubbing environments in Glasgow.

According to VAJ Power, their main goal is to “make what we love (making music, art and events) accessible to more people so the underground DIY scene can continue to exist in Glasgow”.

“We try to create non – judgemental spaces where it is safe to experiment, make art and music. We share the skills we have with others and find ways to make education more accessible to a wider range of people,” said one member of the collective.

“We explore the possibilities and limitation of ‘conscious clubbing’ where politics and different types of art from a diverse spectrum of people extend into venues.”

This selection of “artivists” was identified by Eventbrite for the film series along with those in other cities who are putting marginalised and underrepresented communities at the forefront of cultural events.

Forij Collective said that there has been a thriving “late night scene” in Glasgow for years, however, they added: “This comes with a dominance of the industry by certain demographics and has left little room for marginalised groups to freely express themselves or often feel comfortable.”

Their focus, then, is promoting “accessibility to spaces” and allowing the young generation of creatives in Glasgow to “be more visible, not only within the city but also across the UK.” “As much as DIY stands for do it yourself, it’s intrinsic to be aware that you’re doing it with and for your community,” they added.

VAJ Power said that, for them, the concept of “DIY” meant harnessing limited resources, creating their own platforms, and providing opportunities for other artists.

“This way, we can continue to create and encourage interesting and unusual work from people who wouldn’t have had the chance any other way,” they said.

In the film, art collective Where People Sleep, who also aim to create a “non-judgemental space” said they felt that a shortage of funding from Creative Scotland was a difficulty for the art scene in Glasgow.

“I think that’s why we strive in our collective to be self sufficient as much as we can,” they said. “When you don’t have someone feeding you funding it really pushes you to take matters into your own hands.”

Last month, Creative Scotland Chief Executive Janet Archer stepped down following widespread criticism of a round of funding decisions earlier this year. The funding body made a u-turn on five decisions, while other organisations, such as the now closed-down NVA and Culture Republic, were left in financial instability after losing out.