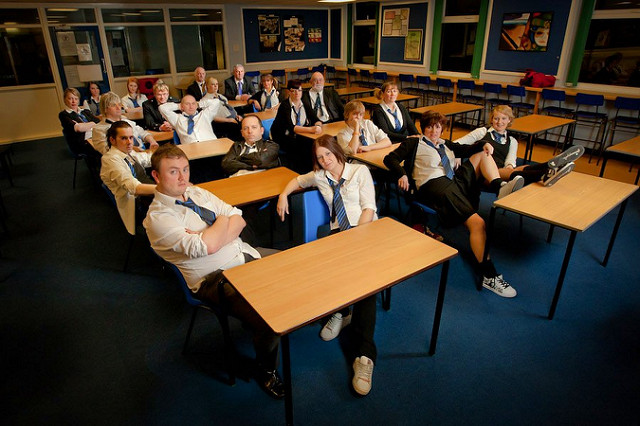 Doaa Shabbir, a 15 year-old school student in Glasgow who recently finished her exams, presents a vision for education which breaks with hierarchies and competitiveness, and sees the uplifting of a whole generation as the meaning of educational progress

IGNORANCE, a nasty aftertaste of the death of ambition, has its origins in a series of systematic failures of the establishment line. The great tragical paradox of Scotland seems to be that while the country was once seen as a giant in the world of education, today the picture seems to be one of harsh disparities.

It is not simply a mistake that only around 2.5 per cent of students in Scotland’s most deprived areas achieved five A grades at Higher level in 2011, as compared to 93 per cent of the general population, or that St Andrews University only accepted 13 students from the most deprived neighbourhoods in 2010.

A system which distinguishes and discards students for not achieving the traditionally accepted standards of attainment is, frankly, not a system worth settling for. For the young Scottish people for whom the failure to provide them with a wide and rich view of the world, to engage them in the intricacies and complexities of society and their place within it, the damage has already been done.

And the roots of this failure are clear. It is not for a lack of resources or ambition, it is the embracing of these very disparities by rewarding a one-dimensional type of progression that continues to leave children across the country behind in a system which is meant to empower them.

A politics of aspiration often claims to create a world which uplifts everyone through a sense of competition and encouragement of upwards progression. Recently, First Minister Nicola Sturgeon underlined in a speech in Edinburgh why she has introduced standardised tests for primary school children. Although apparently unintentional, even she admitted the creation of raw marks as a method to measure the progress of children could lead to school league tables if publicised, perpetuating an unhealthy culture of comparison and competition amongst children even as young as five years old.

The most obvious danger of this attempted so-called development of the education system as it is currently doesn’t underline or identify what sociologist W.E.B DuBois would have identified as “true life”. If we continue to fail to adopt a holistic view towards education systems, embracing concepts of broad sympathy, fluid intelligence, and knowledge of the world and man’s relation to it, we will possess mere “money-makers but not necessarily men”.

The fate of DuBois’ America, he believed, lay in the hands of the few exceptionally talented members of the African American community, who he outlined to be the critical figures in advocacy for the emancipation of African Americans, guiding the Mass away from the destitution of the least fortunate. Those men who held positions of perceived importance, those men who owned homes and were college educated, and those men who treated those around them with a level of human dignity. The distinguished, the esteemed, the elusive. The talented tenth. Expanding and strengthening the equivalent of this section of society within other groups seems to be the instinctive option for world economies.

In India, for example, the Super 30 programme of Anand Kumar searches for “meritious talents” in the most disadvantaged areas and trains them in the mathematical disciplines so that 25 out of the 30 ended up excelling in the entrance exams for the prestigious Indian Institutes of Technology.

In South Korea, entrance to the SKY universities (Seoul University, Korea University, and Yonsei University) is something which children from families for which education is of the utmost importance are trained for from an extremely young age. Private tuition centres for the entrance exams (known as hagwons) are attended by 83.6 per cent of Korean 5-year-olds and 35.5 per cent of 2-year-olds, amounting to an expenditure of around KRW17.8 trillion by parents on these institutes.

This heavy prioritisation of education and the maintaining of competition within it is a prominent element of Korean culture – to which the country’s exceptionally high levels of university educated citizens is often attributed. India’s rising primary education enrolment and literacy rates and its production of world leaders in technological innovation may mean it is hailed as a success story in terms of educational engagement. Possessing the highest level of 25 to 34-year-olds with tertiary education out of the OECD countries means South Korea may be seen as a model for the promotion of ambition in the brightest and most capable youths.

Why these organisations and attitudes actually fail, however, is because they perpetuate the perception of educational achievement as a race. The conditioning of exceptionally able science graduates does nothing for the kind of anxiety-ridden students Somini Sengupta mentions in “The End Of Karma”, one said to have been found hanging from a ceiling fan after being denied access to the IITs. They do nothing for the declining levels of family savings and increasing levels of debt in South Korea, the increasing divorce rates, and the country’s devastating suicide rates, being the highest of the developed world.

Where these attitudes fail is they refuse to view education as the uplifting of the commons instead of a select few. The exclusivity of high-level academic success seems to send a message that the only other perceivable route out of poverty is, in fact, either death or a descent into misery. There is a reason, after all, why the values of fierce individuality and self-provision pushed through the neoliberal establishment have made Britain the “loneliness capital of Europe”.

Where educating for the common weal comes in is eliminating the tunnel vision of what absolute success looks like in terms of education. It makes it possible for the holistic knowledge of the “talented tenth” to be shared by the whole population. It’s about allowing the children of Easterhouse to participate in those critical intellectual discussions about how we wish to see society progress alongside the children of East Dunbartonshire. It’s about the sufficient mobilisation of both to generate the potential to make those steps towards a better future together.

When we see educational attainment as a source of good for the wider communities we live in instead of another rung in the ladder of success, we can view the knowledge acquired as a wealth to be shared and exchanged fluidly. This is not a new or foreign concept, in fact, it is one proven to be a highly successful model. MIT offers free online courses, not purely because they wish to reach out to a wider group of students, but also to reinforce its status as a technologically advanced body which is ready to address challenges and expand horizons. Finland, a country which was ranked as being the happiest in the world by the UN as well as having an educational system which consistently excels in PISA tests, has no mandated standardised tests until the end of students’ senior year of high school, as well as no rankings, or comparisons or competition between students.

READ MORE – Doaa Shabbir: Why Housing is A Sentiment Deeper Than Rooms and a Roof

What does Finland do that is so special? They value plentiful playtime for young children; they value “not stressing out” pupils by having a mandatory school enrolment at 7, and they value caring for children’s overall wellbeing your providing food, medical care, counselling, and taxi services to state school students. Put simply, in the words of Pasi Sahlberg, an educator in Finland’s Ministry of Education and Culture, they “prepare children to learn how to learn, not how to take a test.”

And it all comes down to the most important word in the big dream of Finnish education: equality. With all schools having the same goals and educators who are all required to have at least a Masters in education, a child from a remote village receives the same enrichment as one from a metropolitan city. A first, fundamental step towards this is to have inspiring leadership at school level. DuBois also wrote that attempting to develop transformational potential through school funding without providing higher training of the best teachers is essentially “throwing your money to the winds.”. Research done by King’s College London on the concept of “aspiration poverty” finds that children from economically disadvantaged areas do not lack in ambition, they simply lack the support at school to pursue those ambitions or view them as a reality.

What is needed is not motivational speeches or reassurance. What is needed is sufficient career guidance programmes as well as practical advice on helping children to develop their personal skills and follow their interests, whatever they may be. Until we manage to enhance the talents of those whose goal is teaching instead of those whose goal is personal advancement, we will not possess happy, enthusiastic students who have a real shot in life.

Our role within humanity cannot be to partake in an endless race to assume higher and higher positions of perceived power. This simply undermines the true sense of vitality and intellectual curiosity possessed by the human being. It does not only create a toxic attitude towards educational attainment, it completely shatters the true sense of progression. Progression is not to uphold the hierarchical system which has been in place for centuries, only changing the description of the peoples at the higher level. Progression is instead to uplift a whole generation; to validate their dreams, and allow those dreams to interact with those of others. Put simply, it is to move forward together.