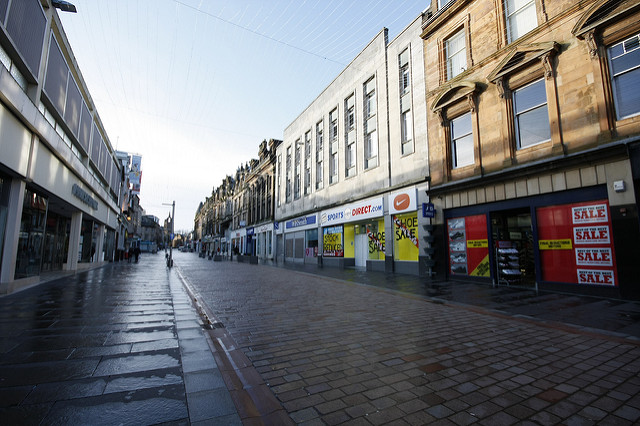 COMMUNITIES are already working together to create vibrant town centres and more should follow suit, community ownership and regeneration organisations have argued, responding to concerns around ‘high street decline’.

Figures published last week by consultants PwC indicated that 290 high street shops in Scotland closed in 2017, leading to concerns for what lies ahead for Scotland’s town centres.

However, Social Enterprise Scotland, Scotland Towns Partnership, Community Land Scotland and the Plunkett Foundation told CommonSpace that the future is in the hands of communities, and it may well be the better for it.

Instead of focusing on falling numbers of big retailers on the high streets, these organisations suggest that real improvements can be – and already are being – made to town centres through investment in social enterprise, community ownership, co-operatives, and community wealth development.

Phil Prentice, chief officer of Scotland Towns Partnership – which leads on work to make the Scottish Government’s Town Centre Action Plan a reality – said he wasn’t concerned by the closure of big retailers, describing the focus on these issues as “clickbait”.

“I think people come to the conclusion ‘oh we’re in trouble because our shops are shut’, but I’m inspired by what’s to come,” he said.

Based on his work connecting with projects across Scotland, driven by communities and supported by the public and the private sectors, Prentice said he saw future town centres as moving away from a focus on retail to the use of spaces for community hubs, art and performance spaces, crèches, and ‘future proof’ housing.

“I don’t think you’re ever going to get back to the level of retail you had in the past,” agreed Linsay Chalmers, community development manager at Community Land Scotland. Chalmers said Scotland is likely to see a change in how town centres are used, and that this could spell opportunities to reinvest more money into the local community.

“The view in the media is general moaning about high street decline,” said Duncan Thorp of Social Enterprise Scotland. “For us it’s about solutions.”

These organisations highlighted just a few of the solutions which are already in motion to restore and bring new vibrancy to town centres – and which they hope to see more of around the country in the coming years.

Communities in rural areas of Scotland have been successfully transforming their local areas through community land ownership for years, and the introduction of the Community Empowerment Act in 2015 means that people in urban areas can now benefit from Community Right to Buy too.

Communities in Scotland can register an interest in land and have the opportunity to buy it when it comes up for sale, and as of June this year, they will also be able to force the sale of neglected lands or buildings.

Linsay Chalmers said towns across Scotland could see great improvements to their area by learning from the rural experience – something she says there has been “huge interest” in from urban areas so far.

“When communities get involved they tend to have very positive outcomes – they know what their community needs,” she said. “There are huge amounts of potential from community led regeneration in town centres.”

One example of where an urban area has started to take this approach is the Stove Network in Dumfries, which is buying up building in the town centre for community use. Chalmers said people in other communities are “watching to see how that works” and that she expects to see similar efforts spring up in other areas.

One of the major benefits of community ownership, Chalmers said, is building “pride in place”, by creating places that people feel confident in and see as attractive. One of the main problems with high street decline, she said, was the “dead space” it leaves in communities. Particularly with the new legal developments, communities will have a chance to change this.

Social enterprise – making sure the money stays in the local economy

One of the other benefits of community land ownership is that it leads to greater investment in social enterprises in the area. Social enterprise, Duncan Thorp said, can fill the void left by big retailers and create long-term solutions for communities through innovation and collaboration driven by communities themselves.

In many communities, Thorp said, this work is already being done. “From community-led regeneration, to development trusts, social housing, community owned land, food co-operatives, renewable energy and Business Improvement Districts, there is much to celebrate,” he said.

These approaches have been particularly successful in rural areas, but Thorp said there were clear lessons to be learned for communities across the country going forward. “Highlands and Islands is very good at this stuff as the market often hasn’t been there so communities are good at coming together,” he said.

“It’s second nature to some of these rural communities as they’ve had no choice. Now we’re trying to get urban areas to do the same.”

Linsay Chalmers said a key benefit of supporting social enterprise is that it contributes directly to the local economy. “With big corporations the money doesn’t stay in the community. Social enterprise is a way of reinvesting money back into that place,” she said.

“For any community doing regeneration work, that’s going to be a big focus, and rural community owners have seen a massive increase in spending in the local area.”

Thorp said it was important for communities to know that there is a range of ways to seek support for such projects, be that from Social Enterprise Scotland, Development Trusts Association Scotland, Community Land Scotland, or others.

With various funding opportunities, and some local authorities such as Aberdeenshire Council offering financial support for social enterprises, Thorp said there are many opportunities out there for communities who want to make a change in their area – “it’s just a matter of raising awareness,” he added.

One such form of social enterprise are cooperatives – businesses which are owned and run democratically by members of the community, giving local people a stake in the local economy.

This might include ownership of shops, pubs, woodlands or any other asset or service, with successful examples already in motion and providing extra support for the community, from employment opportunities for people with disabilities, to spaces for local artists to exhibit their work.

Communities in Scotland can access support for setting up cooperatives from a number of sources, such as Cooperative Development Scotland and the Plunkett Foundation which provides funding opportunities, practical advice, information and training.

Ashley Sellwood, communications and marketing officer for the Plunkett Foundation said cooperatives are a potential solution to the issue of high street decline and have a range of additional benefits to communities including “wellbeing, work and training”.

“The community business model has already seen success in urban areas across the UK,” Sellwood said, noting that over 500 cooperatives are supported across the UK by the Plunkett Foundation, with a further 400 in the process of setting up. “Community businesses provide wider benefits to the local area and this was highlighted in Plunkett’s recent Loneliness Campaign showcasing the ways they provide support for people suffering from loneliness and isolation in rural areas.”

One cooperative which has been supported by Plunkett is Dig In Bruntsfield in Edinburgh, a community shop which has successfully been running for almost four years. After over 200 local residents came together in a public meeting in 2012 and voiced a desire to re-establish a greengrocer in the area, a team of volunteers set plans in motion and through a combination of funds raised from the sale of shared to the public and grant funding, the shop raised £30, 000 and opened in 2014.

Sometimes referred to as ‘The Preston Model’, named after the English city where the approach has seen great success, Scotland is set to launch its own pilots of ‘community wealth building’ in the coming months.

The approach is one of localism, which utilises and reinvests in local resources, which may well include elements of community ownership, social enterprise, and cooperatives, and asks that public bodies spend their money, including investing pension funds, locally.

After years of economic downturn in the post-industrial city, Preston sought the support of the progressive economics think tank CLES in 2013 to implement community wealth building, whereby public bodies’ spending would be kept in the city. Preston has since seen over £70m redirected into the Preston economy and £200m into the wider Lancashire economy.

Learning from the positive impacts seen in Preston and other pilot areas in England, Scotland Towns Partnership has gained approval from the Scottish Government to run three pilots in Glasgow, with plans to expand this later to one post-industrial town and one coastal town. Before beginning the pilots, Prentice explained, there will be a consultation with the local communities to learn what they want to see from it.

What this would mean, Prentice said, is that if the projects involved the construction of houses, for example, “local people will be employed and materials will come from the builders down the road”.

Aside from the economic investment, Prentice added that this would strengthen the community’s relationship to its own assets. “People won’t perceive it as the legacy of some local government person that nobody actually wanted, so they’ll look after it and won’t let it decay,” he said.

It is innovative approaches such as this, he said, which make him optimistic for the future of Scotland’s town centres, and which he said present a real opportunity for Scotland to be a “world leader”.

“The issue of ‘high street decline’ is one that Scotland has already recognised and it’s on the front foot,” he added.