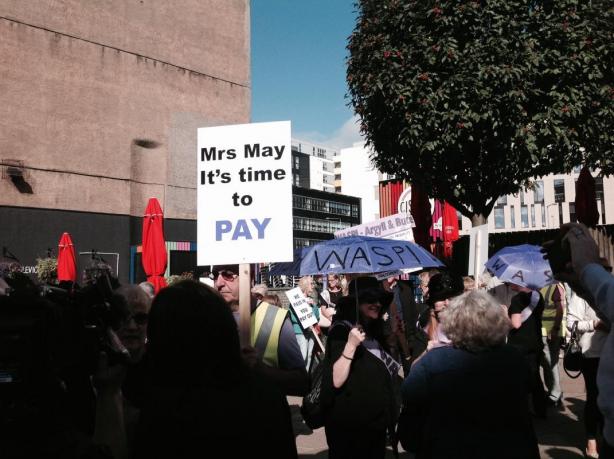 Tory government must respect the will of parliament by backing “pension equality”, the SNP has said

THIS WEEK HAS turned out to be a hopeful one for the Women Against State Pension Inequality (WASPI) campaign, with an intervention from the Parliamentary and Health Service Ombudsman to speed up its maladministration case against the Department of Work and Pensions (DWP), followed closely by a unanimous vote of support in the House of Commons.

The motion put forward by the SNP as part of an opposition day debate on Wednesday called on the UK Government to improve transitional arrangements for women born on or after 6 April 1951 who have been adversely affected by the acceleration of the increase to the state pension age.

Almost 3.5 million women across the UK born in the 1950s have been affected by the changes.

The motion passed by 288 votes to zero against, enjoying broad cross-party support with the exception of the Conservatives, as the government continued its practice of abstaining on opposition debates.

“These women […] have had the misfortune of being female and being born in the 1950s and live under this UK government who refuses to do the right thing.” SNP MP Ian Blackford

It was, however, backed by the DUP and five rebel Tories, including one Scottish Conservative in the form of Moray MP Douglas Ross, who had earlier faced criticism from the SNP for seemingly staying silent on his pre-election promise to support the campaign.

Robust debate in Parliament this afternoon on behalf of the WASPI Campaign. Vote in favour 288-0. We hope all parties will take note and support the WASPI women. #WASPI #notgoingaway pic.twitter.com/d2chhuOxrP

A number of other Tory MPs have signed a petition in support of the campaign but abstained on the vote, including East Renfrewshire MP Paul Masterton.

SNP Westminster leader Ian Blackford MP has said the government must support the will of parliament on the issue. “MPs who signed the petition supporting the WASPI campaign, but didn’t vote with the SNP in the Commons have duped the women who are fighting for the pension they are due,” he said.

“These women are guilty of nothing. They have had the misfortune of being female and being born in the 1950s and live under this UK government who refuses to do the right thing.”

Blackford described the issue as a matter of “equality” and said: “I speak on behalf of these benches when I say we will not rest until this injustice has been rectified.”

He added: “The sight of Conservative rebels alongside DUP support puts real pressure on the government – this is one of the few votes where Tory rebels have actually gone through the lobbies against the government since the election.”

May we gently point out to #Conservative MPs in @theSNP debate that #WASPI is a UK wide issue, not a Scottish one.

The vote came one day after it was announced that the Parliamentary and Health Service Ombudsman had stepped in to speed up the WASPI campaign’s mass maladministration complaint against the DWP.

Following complaints of significant delays to the process and a series of rejected requests by WASPI’s legal team for the DWP’s Independent Case Examiner (Ice) team to adopt a more streamlined approach, the Obmudsman has agreed directly with Ice that it will streamline the process by investigating a representative sample of complaints and considering how any such maladministration should be addressed.

In response to the announcement, WASPI legal director, Susan Beevers said: “We welcome the intervention of the Ombudsman, which could reduce the length of the maladministration case by around one year.

“Throughout our campaign we have been conscious that the case puts a significant burden on individual women to pursue complaints and also has implications for the tax payer given the administrative costs for the Ice, DWP and the Ombudsman.

“We urge the government again to consider the options for transitional arrangements called for by WASPI.

“The government could end the injustice suffered by WASPI women quickly and efficiently if it chose to – we hope the progress with the maladministration case and the intervention of the Ombudsman will help them to reconsider.”

Warmest thanks from all #WASPI women to these 5 #Conservative MPs who stood by their principles and voted against the whip today. @timloughton @Douglas4Moray Peter Bottomley Gordon Henderson Philip Hollobone. https://t.co/L5LhIeeUOJ

One Tory MP, Rachel Maclean, has come under fire for her arguments during Wednesday’s debate on the issue, in which she asked the parliament: “What exactly is wrong with a woman aged 65 taking up an apprenticeship?”

Other Tories such as Ross Thomson MP for Aberdeen South, who abstained on the vote, accused the SNP of “political point scoring” and said that the WASPI women “deserve better”.

SNP MP Mhairi Black described the Scottish Conservatives as having a “brass neck” and said: “I am happy to supply the Brasso for that brass neck. Honest to god, how shiny it is, for the amount of rubbish that has been spoken in this chamber today by those members, is appalling.”

Concluding her remarks in the debate, Black said: “Three years ago we were told we were ‘Better Together’, the strong shoulders of the United Kingdom. Vote No to save your pension. It’s been three years. If we are better together, prove it.”

A backbench business debate on the WASPI campaign is due take place on 14 December, proposed by Labour MP for Easington Grahame Morris, who backed the SNP’s motion on Wednesday night.