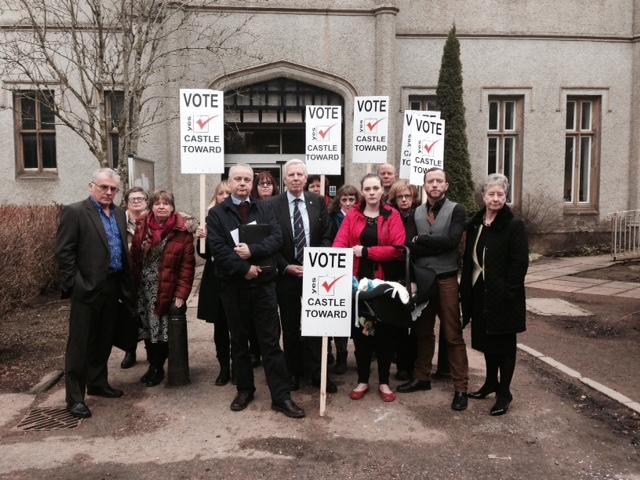 Pressure on councillors will increase following Castle Toward case

ELECTIONS will see the current Argyll and Bute Council administration booted out of office, if local campaigners have their way.

Supporters of the Castle Toward buyout plans were left outraged on Thursday after senior council officers and the council leaders blocked a community bid to buy out the derelict Castle Toward estate.

Campaigner Lorna Ahlquist said discussions were already underway to propose alternative candidates to independents who currently hold office: “You can never start too early on something like this. There is a long lead in time to prepare, get known and organise your campaign.”

“The time is right as the referendum has really engaged people with politics. It is also widely acknowledged that we need big changes in Argyll and Bute as our reputation has been badly damaged, drawing national media attention. The Castle Toward sale or ‘non sale’ has shown how poorly this council operates.”

Ahlquist emphasised that a coalition of candidates would have to be based on community and cooperation, rather than on party lines.

She continued: “We badly need some new politics with a small p – by that I mean, it is not about party but about candidates who know how to positively work with their communities and work to high standards.”

Plans to take on entrenched council figures follow a wave of anger at the council’s treatment of campaigners.

Local MSP Mike Russell stated that instead of listening to communities and councillors who backed the Castle Toward bid, the administration has launched a “witch-hunt” to discipline those involved.

Earlier this week, CommonSpace revealed accusations of bullying, threats and cover-ups surrounding the council’s work. The individuals affected were afraid to speak out publicly (click here to read more).

Russell, in a statement titled “Councillors and senior officials should hang their heads in shame”, said: “Argyll and Bute Council has lost the confidence of those it governs. This afternoon’s unpleasant, tawdry, self-serving and destructive meeting proves that beyond doubt. The Councillors and senior officials who were party to it should hang their heads in shame.”

Russell continued: “But it is also deeply sinister in its attack on Councillors, and others who supported the community. Clearly Dick Walsh [council leader] wants council officials to conduct a witch hunt against anyone who criticises him, and that in itself speaks volumes about his disastrous leadership.”

Russell and community campaigners are calling on Audit Scotland, the local government watchdog, to intensify its scrutiny of the council.

Campaigners will meet in Dunoon, Argyll, this Sunday to discuss the way forward.

The council elections are due to take place across Scotland in 2017.

Image courtesy of Save Castle Toward