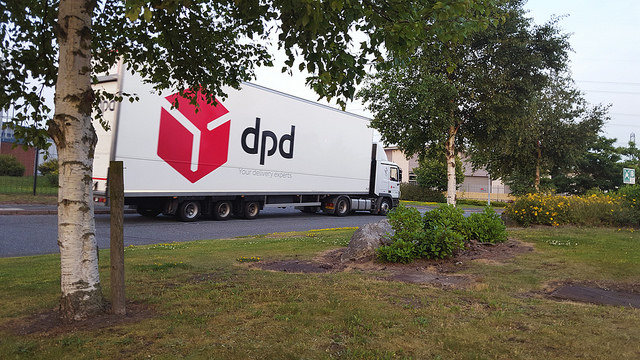 MEMBERS OF THE GMB TRADE UNION staged demonstrations across Scotland on Tuesday morning in protest against delivery firm DPD.

Over 150 Owner Driver Franchisees (ODFs) assembled at demos held at the DPD depots in Glasgow, Edinburgh, Dundee and Uddingston, arguing that they had experienced pay cuts, enforced working hours and what GMB Scotland described as “arbitrary and detrimental changes” to their contracts in the run up to Christmas.

The changes in question involve what GMB Scotland believes constitutes a breach of the Working Time Directive, which generally provides workers with the right to a limit of 48 hours on average per week on hours they can be required to work, and 11 hours consecutive rest in any 24 hour period.

Additionally, protestors claim that DPD has introduced a reduction of delivery rates on a sliding scale, and that there is “strong evidence of drivers being forced to drive overloaded vehicles.”

READ MORE: BiFab workers marched on Holyrood amid the “biggest industrial dispute in a generation”

DPD views ODFs as self-employed, despite the fact that these workers have no control over changes to their contracts, can only take two non-consecutive, unpaid weeks off per year, and have no say in what days, hours or routes they work.

ODFs are reportedly also subject to a £150 ‘breach’ charge if they take an unauthorised day off due to sickness or bereavement, which DPD as a breach of contract.

Speaking to CommonSpace, GMB Scotland organiser Calne Waterson confirmed that DPD had refused to meet with GMB to discuss these issues.

“There’s absolutely no way that they could be considered as self-employed.” GMB Scotland organiser Calne Waterston

“I have written to the chief executive, Dwayne McDonald, to the head of ODF – the Owner-Drive Franchise – and to the regional manager in Scotland; they’ve all ignored the request for a negotiating meeting. The only correspondence I’ve had from any of them was from Dan Turner, the head of ODF, and that was to complain that I was pointing out the problems with vehicle repairs.”

Regarding the ‘breach’, Waterson said that the practice was “absolutely widespread” in DPD, though he could not comment on whether it took place elsewhere in the delivery industry.

Given the lack of flexibility and autonomy that the ‘self-employed’ drivers reportedly work under, Waterson was asked if he believed there was a case for changing the law regarding self-employment and the protections that come with it.

“Absolutely,” Waterson responded. “We’re in the difficult position – though I suppose its breaking new ground for the trade union movement – that the guys want to remain self-employed, but they want the flexibility that should go with that. And obviously, they want to have some say in what contracts are provided to them.

“They’re given contracts when they start, but the contracts – as the company’s proved – can be changed, always to a detriment to the ODFs, and the company doesn’t even wait for them to sign the contracts, they just invoke them. So there’s absolutely no way that they could be considered as self-employed.”

“Disturbingly, we are also hearing of managers informing workers that they are not entitled to join a union.” STUC General Secretary Grahame Smith

On Monday, 4 December, STUC General Secretary Grahame Smith wrote to Keith Brown MSP, Cabinet Secretary for Economy, Jobs and Fair Work, regarding the drivers’ complaints, saying: “Disturbingly, we are also hearing of managers informing workers that they are not entitled to join a union. There are also numerous reports of threats of dismissal for taking part in any stoppage or for GMB membership.

“The STUC will strongly support the DPD franchisee workers.”

DPD responded to CommonSpace with a prepared statement, emphasising that they do not recognise either GMB or Unite the union as representatives of their drivers.

The statement says: “We are very disappointed indeed with the actions taken by GMB, who do not represent DPD’s franchise drivers.

“These drivers are part of a genuine self-employed model that we have operated in the UK for the last 20 years.

“While we do recognise the Unite union in relation to our employed staff at DPD, the GMB do not represent our self-employed franchise drivers.” DPD statement

“Franchise drivers are contracted to provide a service to DPD.  As with all supplier contracts, we negotiate directly with the supplier, not via a third party.  As a result, while we do recognise the Unite union in relation to our employed staff at DPD, the GMB do not represent our self-employed franchise drivers.

“We haven’t slashed our delivery rates, as claimed, in fact the basic rate went up at the last review. The new rates are designed to be fairer for all drivers, all year round.”

Regarding the breach charge, DPD argued that “DPD franchise drivers are not fined for being off work sick.  Franchisees are contracted to provide a service – and have the option of providing a substitute driver in the event of sickness.  If they cannot do that, DPD will try to reallocate a franchisee’s route amongst other franchisee or employed drivers.

“While DPD has the right, under the terms of the contract, to pass on to the franchisee the costs incurred if the company has to bring in additional drivers to provide services, in 2016 we passed on these costs in only 6.5% of the cases where franchisees did not provide service.”