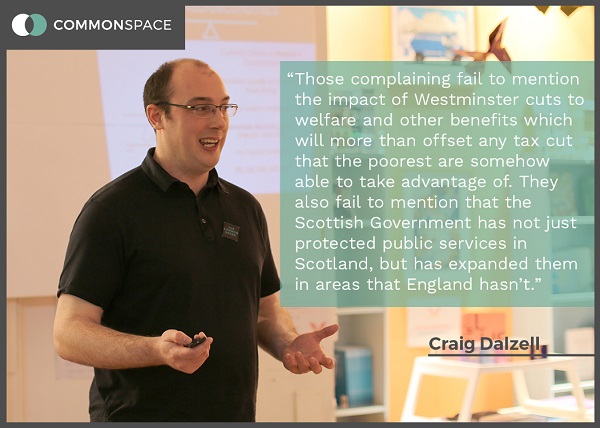 THIS year’s budget, the seventh since the start of Tory austerity, has been marked by the dismal gloom of a government too weak to tackle the problems it has set itself, and too wedded to its own counterproductive ideology to find the correct solutions even when it tries.

This proved to be a cue for the Herald newspaper and others to apply pressure on the Scottish Government to match the cut in next month’s Scottish budget, to close the “tax gap” between the two nations.

READ MORE: Everything you need to know about the UK budget

Similarly, these groups are also demanding that the Scottish Government matches income tax cuts coming into England next year. The Scottish Government declined to raise the 40 per cent tax band from £45,000 to £46,350 as has been done in England – a maximum tax cut of £670 for those most affected by it.

Of course, not mentioned in these demands is the fact that the income tax cut would only affect a sliver of the Scottish population (less than 15 per cent) and that house prices in Scotland are so much lower compared to the massively overheated bubbles down south, that the average house price is already well below the zero rate band for LBTT. Even the average price for a detached house in Scotland is below £300,000.

The Office for Budget Responsibility (OBR) doesn’t expect prices to fall at all as a result of this tax cut; all that will happen is that house prices will rise, leaving the seller to pocket the cash instead of HMRC.

And so these are curious calls from a crowd of lobbyists who have spent so long crying out for the Scottish Government to “use its powers”. It seems that they only want the powers to be used to do the thing that would happen if the government didn’t have them at all.

The Scottish Government absolutely must not be tempted to give in to these unreasonable demands which simply do not fit with the economic reality of Scotland.

These tax cuts come with a price. Public services are being squeezed to breaking point as it is and the UK Government is pressing ahead with its plans to cut the budgets of government departments to the bone.

This budget has promised a £400m per year cut to HMRC – despite growing concerns of the impact of tax avoidance and evasion as detailed in the Paradise Papers and, perhaps more critically, despite the looming mess of a hard Brexit without any plans for how the customs part of HMRC will cope.

The budget does not allow for any increase at all in capital spending for the purposes of building new borders or customs checkpoints at the UK’s points of entry, and the department for international trade is about to see a budget cut of up to 25 per cent right at the point where “global Britain” should be about to “sell itself to the world”.

But don’t worry. Defence is getting a boost – that should keep us ‘safe’ from whatever dark shadow the government wants us to be scared of tomorrow, and the transport budget is up, allowing HS2 and Crossrail to continue inflating London’s economy at the expense of everything else.

Of course, those complaining fail to mention the impact of cuts to welfare and other benefits which will more than offset any tax cut that the poorest are somehow able to take advantage of. They also fail to mention that the Scottish Government has not just protected public services in Scotland, but has expanded them in areas that England hasn’t.

Our water supply remains in public hands – there can be few services less suited to privatisation than that vital resource – and services like medical prescriptions, tertiary education and elderly healthcare will surely be of far more benefit to a greater number of people than a couple of middling tax cuts.

The Scottish Government absolutely must not be tempted to give in to these unreasonable demands which simply do not fit with the economic reality of Scotland. If England wants to continue to slash and burn its public services, to allow those fortunate enough to be able to pay for healthcare to receive it while abandoning the rest, to charge headlong into the kind of ‘me first’ society that has been the direct cause of a lot of the economic problems of this country, then it has the powers to do so.

Scotland has some of the powers it needs to take a different path. A race to the bottom on tax is not one that we want to win, nor one in which we should even take part.