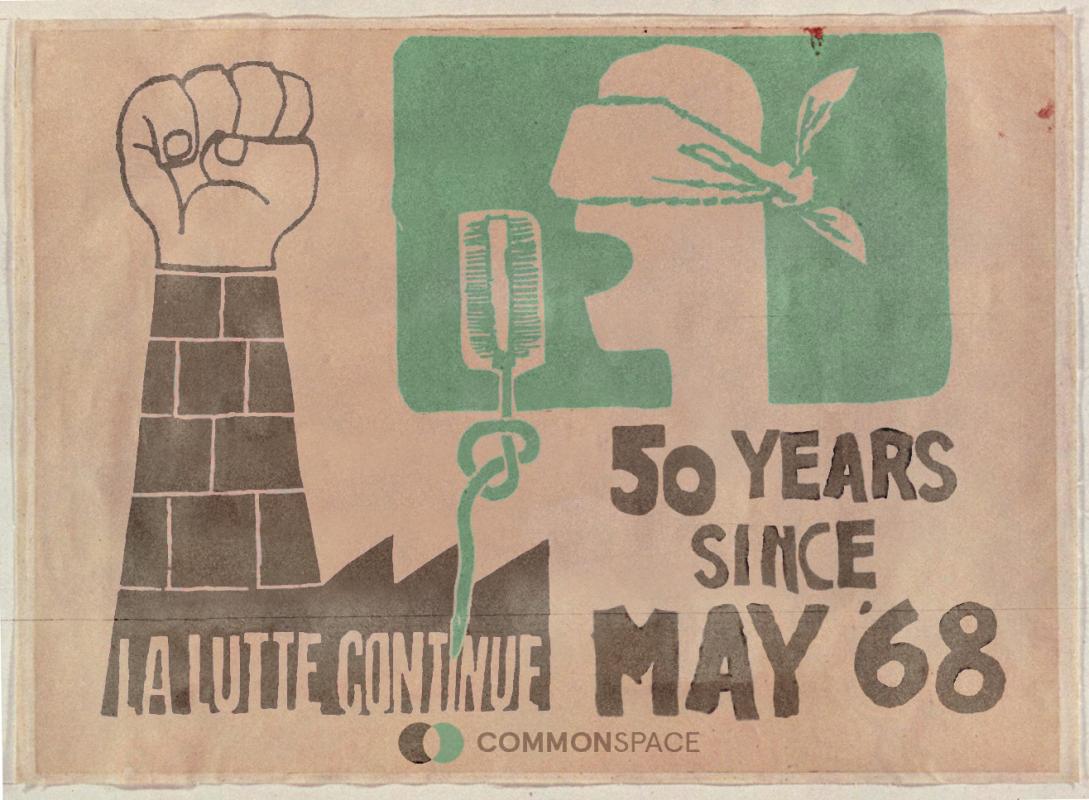 As CommonSpace begins its week of reflections on the 50th anniversary of May ‘68, editor Ben Wray argues that even if it is part-myth, the idealism and imagination of that mass revolt can be a timely inspiration for today’s left, too engulfed in cynicism to dare to dream

IN FRANCE, something is stirring, perhaps with only faint echoes of its revolutionary past, but echoes nonetheless.

Student blockades and rolling rail strikes are seeking to bring a halt to French President Emmanuel Macron’s attempt to reform labour markets and universities to make them more subordinate to the industrial and educational elite.

Jean-Luc Mélenchon, left-wing candidate in last year’s presidential election and leader of the France Insoumise movement, was not afraid to draw the obvious historical parallel, ridiculed by some, between today’s emerging resistance and the events of May ’68 in France half a century ago.

“The president of the rich has decided to confront us,” Mélenchon said. “We will fight back. We will see who will have the final word. If we have the wisdom to unite across the country… the final word will be ours. To those who suggest with a wry smile that I dream of May ’68, I say, yes, it’s a fine dream. I prefer my lovely dream to the nightmares that are in the process of happening.”

COMMONSPACE FORUM: 50 years since May ’68 – Is the Left still revolutionary?

Mélenchon is a curious character. 16 years old when the events of May ’68 took place, in many ways his political life has taken the polar opposite direction to others of that generation. Whereas many began as leaders of a movement which aimed to get rid of capitalism and ended up as its arch-defenders, Mélenchon’s political beginning was as a loyal servant of the centre-left Socialist Party, and has ended up vowing to bring about “revolution” of the French political and economic system, replacing it with a new eco-socialist Sixth Republic.

Of course the regime of General Charles De Gaulle was never actually overthrown in 1968, but the workers and students who shut down the whole of France in a wildcat general strike came mighty close, and saw the government go from ridiculing the street fighting radicals to conceding just about every practical demand it could, other than of course the existential one – “power to the workers councils”.

This story is evidence of the practical utility of the dreamer – it turned out daring to dream was the most efficient way of securing the bread & butter victories of increased wages and reduced working hours.

But May ’68 is of course about much more than the functionalism of effectively winning reforms, and to leave its importance at that would be to miss the soul of ’68, and why talking about it really matters now.

As the Italian philosopher Benedetto Croce wrote, “all history is contemporary history”, and the real significance of May ’68 50 years on is the contrast between its militant idealism and today’s left, too engulfed in its own cynicism and narcissism to be reaching for the stars, despite the fact that the world has never needed daring ambition like it does right now.

If you are in any doubt about the urgency in which transformation in our economic and political order is required, consider this from a new book on the politics of climate change by Geoff Mann and Joel Wainwright, Climate Leviathan.

“In 2012 the International Energy Agency, hardly a revolutionary outfit, warned that without a change in direction, by 2017 the world would have energy infrastructure which ‘locked in’ emissions at a scale that closed ‘the door’ on the possibility of limiting global warming to non-disastrous levels. That infrastructure has since been built.”

This is one of Mélenchon’s “nightmares in the process of happening”, a slow motion ecological nightmare which the present order seems totally incapable and unwilling to seriously address.

Mann and Wainwright argue that the crisis of climate catastrophe is really a “crisis of imagination and ideology”.

“People do not change their conception of the world just because they are presented with new data”, they warn.

If there is any truth in the saying, attributed to both Fredric Jameson and Slavoj Zizek, that “it is easier to imagine an end to the world than an end to capitalism”, then May ’68 should act as a historical jolt of the imagination.

Some ’68 veterans may be thinking of the words “naïve” or “mythology” right now in my gushing over that time in history, and it is traditional in articles of this nature to add in a word of caution about the dangers of nostalgia and over-simplicity.

But I would counter that while cautionary notes may be necessary for the historian or for the ‘68er who needs to rationalise their own post-‘68 political experience through that prism, for those who approach history less burdened by the experience of the past and as a toolkit for changing the future, the emphasis needs to be placed on the power of the dreamer to actively bend the world to their will.

Why? Because the disruptors of the present tend to come from the Right. Witness Trump, the alt-right and Brexit. In comparison, the left appears stuck in a defensive groove, too busy being suspicious of ourselves to be worried about the fact that we have been left behind, as the history-makers are elsewhere. At best, we are fighting rear-guard actions to defend the gains of the ’68 generation, rather than breaking new ground.

Only through a bold, transgressive rupture with the present can the nightmare of humanity’s slow descent into disaster be averted. In that context, being realistic really is demanding the impossible. May ’68 should be a reminder that it is the coming together of big events with big ideas which shape history. Cynics be damned – we should follow Mélenchon’s lead, and never forget to dare to dream.