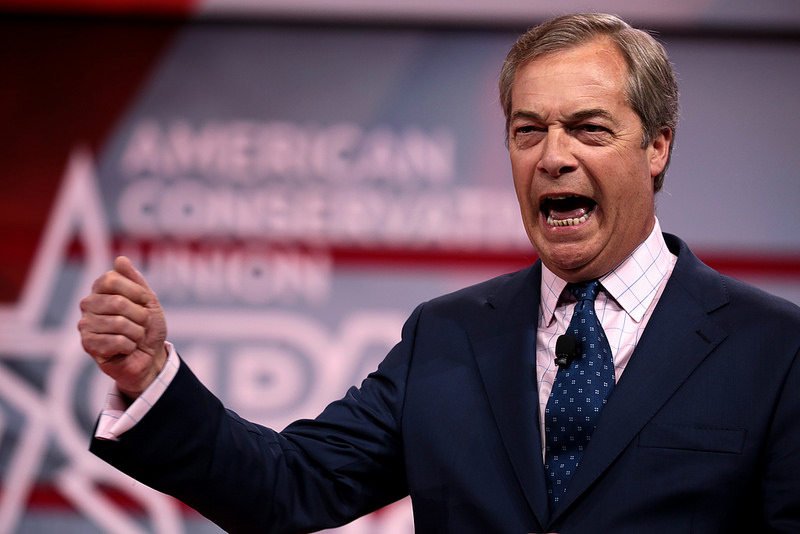 AFTER a controversial interview with former Trump strategist and far-right figure Steve Bannon, campaigners are urging the radio station LBC to dump host Nigel Farage amidst claims he uses the station to promote far-right messages of hate.

Nigel Farage hosts a regular, heavily promoted phone-in show on LBC [Leading Britains Conversation] and a new online campaign is urging big-brand companies such as the clothing giant TKMaxx to withdraw their advertising with the station’s parent company, Global Media.

Farage has been heavily criticised for his unwavering support for Donald Trump, he once hosted his show from a Trump campaign rally and recently conducted an interview live on LBC with his acquaintance and former Trump staffer Steve Bannon, an American far-right political figure who once backed the fascist British National Party.

Dump Farage, a website set up in the wake of Trump’s visit to the UK, allows people to send ready-made tweets urging advertisers to withdraw their support whilst Farage is on the payroll.

Despite failing to be elected at Westminster seven times since 1994, the former UKIP leader has also pledged a return to frontline politics if Theresa May opts for a soft Brexit. The author and Guardian columnist Owen Jones, who is one of the figures behind the campaign, told CommonSpace that it was “wrong” that Nigel Farage could use his platform on LBC to promote himself.

Rightwing extremism’s on the rise – and LBC is legitimising it. Are major companies like @BritishGas, @Experian_UK and @TKMaxx_UK happy to associate their brands with it?

Watch this video on how we can #DumpFarage https://t.co/0haeMVKFYQ to stop the far-right becoming mainstream pic.twitter.com/YYSdGj8XZW

He said: “The western world has seen the rise of the far-right and the normalisation of their rhetoric, but just last week we showed through the marches against Trump’s UK visit that we can reject that.

“Whilst Trump was in the UK, Nigel Farage, himself an ally of Trump, interviewed Steve Bannon, a fascist who has praised Mussolini.

“On air, Bannon talked about how people should ‘rise up’, issuing a ‘call to arms’ and using the language of war and that went totally unchallenged,” Jones said.

Jones added that Bannon’s language was particularly disturbing only two years after the murder of the Labour MP Jo Cox, who was killed in her constituency by a far-right extremist.

Farage has attracted controversy throughout his career for racist and sexist remarks, once stating that he would be concerned if his neighbours were Romanian and brushing off remarks from Trump about sexually assaulting women as “alpha male boasting”.

Following the interview with Bannon, LBC political editor Theo Usherwood reported comments made to him off-air by the American radical right strategist: “Fuck you. Don’t you fucking say you’re calling me out. You fucking liberal elite. Tommy Robinson is the backbone of this country.”

Bannon said the jailed former English Defence League leader, whose real name is Stephen Yaxley-Lennon, was “not a bad guy”.

The campaign against Farage’s show attracted high profile support online, with thousands of tweets being sent by users and media commentators pledging not to appear on the station until Farage was removed as a host.

Scottish Green MSP Ross Greer, the party’s culture and media spokesperson, backed the calls for Farage to be forced off the show, telling CommonSpace: “There’s no question that Farage sees himself as Trump’s ambassador in the UK. Not deterred by the decimation of UKIP, Nigel Farage continues to seek any outlet that will allow him to promote his xenophobic and increasingly fascist brand of politics.

“Normalising this serious danger through a regular platform on LBC is unacceptable. There is nothing normal or legitimate about fascists and they should not be given the space to promote their agenda.

“Nigel Farage has already humiliated LBC enough, including by using their studios for an interview with Alex Jones, a US conspiracy theorist famous for harassing the families of the Sandy Hook school shooting victims and claiming the mass slaughter was a government false-flag operation. Now, he is playing a major role alongside Trump, Steve Bannon, ‘Tommy Robinson’ and others in uniting far-right forces violently attempting to divide Europe and America by race and advance a truly wicked white nationalist ideology.

Scottish Labour MP Danielle Rowley also backed the campaigners: “They say you can judge someone by their friends. Nigel Farage’s views are quite extreme enough already, but it’s clear he also keeps some pretty rum company including far-right apologists like Steve Bannon.

“Ultimately the best way to hit a commercial broadcaster is in the pocket and it is perfectly appropriate to ask advertisers whether these unsavoury views are the sort of thing they wish their brands to be associated with.”

Owen Jones added that concerns about Nigel Farage’s presence on LBC went beyond the Bannon interview: “Nigel Farage is somebody who speaks at fascist party conferences elsewhere in Europe, supports far-right candidates in other countries. We have to start drawing a line and saying that this legitimisation of these extremist views is dangerous, and these brands that advertise with LBC are paying his wages to allow that to happen.

“We know from the trial of the man who murdered Jo Cox that the media had a part to play in his radicalisation and sadly we now know where that can lead, and unless we learn from that then a lot more people will be harmed.”

Owen Jones also responded to some critics of the campaign online, who say that it could be used to censor left-wing views as well as those of the far-right.

“But looking at the dangers [of the far-right] of allowing this normalisation to continue, I don’t think that means we can stand by and allow platforms for fascists to spread to rhetoric.”

We have no current plans to change our advertising strategy, but we will continue to take steps to ensure our advertising doesn't appear alongside content which is obscene, illegal, or at odds with our values 1/2

Responding online to tweets from their customers, the bank NatWest said: “We have no current plans to change our advertising strategy, but we will continue to take steps to ensure our advertising doesn’t appear alongside content which is obscene, illegal, or at odds with our values.”

But one customer wasn’t satisfied with the response, telling the bank: “I have no current plans to continue banking with you if you don’t change your mind on this.”

LBC did not respond to a request for comment.